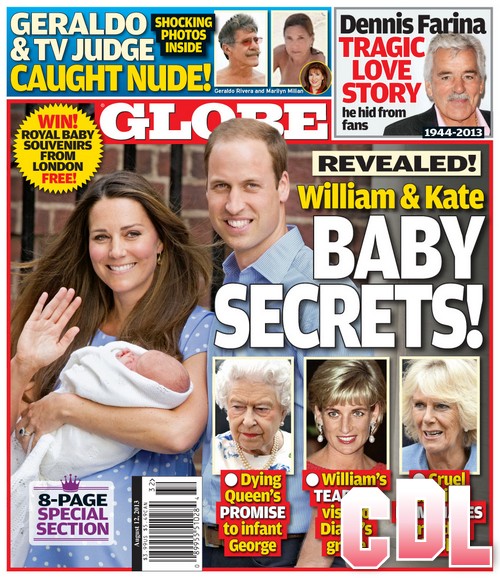 Bringing a new baby home from the hospital is always an emotional and overwhelming experience. Hormones are out of whack and suddenly there are things like feedings and sleep deprivation to contend with. There’s no reason to believe that Kate Middleton and Prince William’s first week as first-time parents has been any easier than other couples’. They’ve chosen to spend their time in Buckleberry with the Middleton family, swapping royal baby nurses for a real live grandmother, Carole Middleton to provide relief here and there. Kate’s family is the simplest part of the equation.

According to the Aug. 12th print edition of GLOBE magazine the royal involvement has been pretty heavy for Kate and William to deal with. Queen Elizabeth obviously has a lot to say about Prince George Alexander Louis and she also made several promises to the tiny heir-to-be. She has also reportedly assured William that he will indeed ascend to the throne within a year, bypassing his bumbling father, Prince Charles.

After the birth of his son, William also paid a visit to his mother, Princess Diana’s grave. Can you imagine how difficult it has been for him to not be able to share his overwhelming joy with the mother that he adored? Obviously William needed to find a way to connect with her at this time. If that wasn’t enough there is always Camilla Parker-Bowles, the evil step monster. Since she has been banned from being within a mile of Kate and the baby she has now turned her venom on Prince Charles. In other words good ole’ Cami is doing what she does best – even at a joyous time – pissing people off while drinking like a sailor!

Also inside the new issue of GLOBE is a story about Dennis Farina who passed away from a fatal blood clot last week. He was one of those actors that I think everyone loved, even if he was cast as the bad guy. You just always knew that beneath that rotten character onscreen was a super nice man. He took a personal love story to the grave with him and leave it to GLOBE to share some of the details with readers.

Last week Geraldo Rivera got a little too drunk while feeling pretty lonely and decided to Tweet a half naked photo of himself for attention. He claimed 70 was the new 50 but I’d say if you’re 70 then you need to keep all of that under wraps even if you work out! Anyway Geraldo has had quite a bit to say about this selfie and you can catch all of the details in the Aug. 15th print edition of GLOBE.

As usual GLOBE is way ahead of the game on all the top stories. One thing you can always count on is exclusive behind-the-scenes royal coverage with GLOBE – so do what I do each week and grab yourself a copy. I can barely wait to learn how the Palace is handling all the changes brought about by Prince George’s arrival – and I know GLOBE will expose every last detail! In the meantime, what do you think set Camilla off this time – it doesn’t take much! Tell us your thoughts in the comments below!