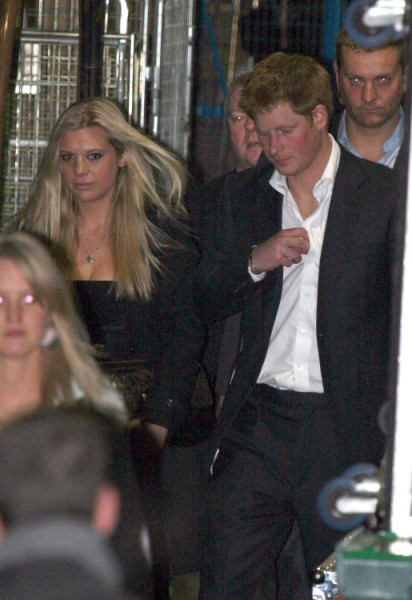 A prince’s arm never stays empty for long and after weeks of speculation that Cressida Bonas and Prince Harry were on the rocks, it seems like her reticence to enter into the royal family has finally won over. But don’t cry for Harry. He was over it before she even got the words out of her mouth (if he even bothered to listen). Because he only had one thing on his mind – calling ex-girlfriend Chelsy Davy.

And in an interesting twist, Harry is using the same woman that scared Chelsy away from being a princess to try to entice her to give him and the idea another shot. Kate Middleton is Harry’s not-so-secret weapon. “Harry’s going out there determined to win Chelsy back and persuade her to try again,” an insider said. “It’s a long shot and he knows being with him’s not like dating any other guy and he comes with a lot of baggage. But he wants to point out that Kate Middleton does enjoy a certain level of privacy and Chelsy could too if she’ll agree to try.”

In an effort to win his first love back Harry is scheduling some Africa time after his US tour is over in May. According to Nine MSN, Harry has planned five days in South Africa to be with Chelsy where they can relax and enjoy the things they used to do before royal duties and careers took over their lives.

God, I want this to work but it seems like such a long shot. Chelsy’s not playing. She does not want cameras breathing down her neck while she smokes a pack and passing out drunk on a sandy beach. Kate Middleton may have her weight issues she likes to keep hidden but Chelsy has her own vices and is not in any hurry for the rest of the world to give its opinion on them. But she’d be so much fun! And she just broke up with her boyfriend and practically ran out England the second Harry came back from Afghanistan. That’s telling, no? There’s no one for Harry other than Chelsy. I’ve accepted it. Harry’s accepted it. Now Chelsy just has to get on board. How funny though if Kate can be the glue that brings these two back together. Chelsy needs to realize that she won’t be the Fergie to Kate’s Di. The media already has Pippa for that!

Do you believe a Prince Harry/Chelsy Davy reconciliation is on the way or will the Chelsy Davy/Kate Middleton comparisons keep her from committing?