Prince Harry’s Girlfriend Hungry For The Crown, Running Old Girlfriends Out Of Town! 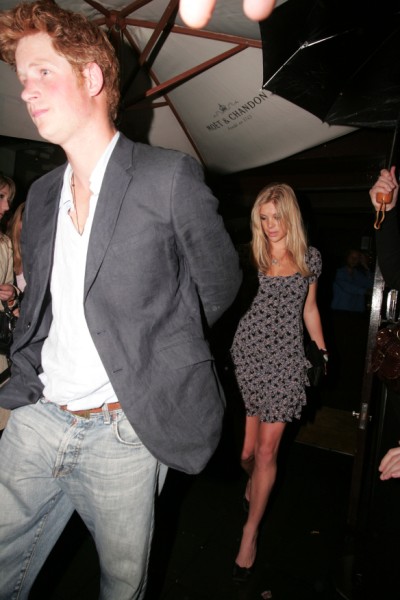 I’m not gonna lie. Prince Harry’s girlfriend, Cressida Bonas, is all right but I miss me some Chelsy Davy. Prince Harry’s ex showed up at the royal wedding last year looking like she was on a 24-hour boozer and I wouldn’t have been surprised if she pulled a couple cigarette buds from her hair during the “I dos” but that’s just her charm. She doesn’t give a shit. Look at the pic of her smoking below. That’s our Chelsy! She works hard (she’s a lawyer) and plays hard and has never had eyes for the crown. I’m going to miss her. Yes, after many years, I’m letting her go. She obviously doesn’t want to be a part of our gossip life. Just as Harry was caught with Cressida making out all over the ski slopes Chelsy was, naturally, getting wasted with friends in London. They threw her a “Get the fuck out of London already” party because she’s moving abroad indefinitely.

So is it just bad timing or can Chelsy not stand the fact that Harry has moved on? Not sure. I heard about Chelsy’s plans awhile ago and she doesn’t seem like the type to run away just because a new girl has put a number on her man. Chelsy could take Cressida, no problem. I hear she’s just tired of London. She’s from South Africa. She likes the heat and the sun and I think she only moved to London in the first place to be closer to Harry. So what’s keeping her there now? She’s got a few years before she figures out that he’s the only one anyway. He might be married by then but that doesn’t matter. It didn’t matter for Charles and Camilla anyway.

But will Princess Cressida pull a Diana? Will she freak out when her husband takes a mistress? I’m not sure. She seems to come from the club that knows what’s up and how royal princes work. But would Chelsy ever lower herself to be a Camilla? She couldn’t stand the fact that Harry cheated on her. Could she stand being the other woman?

This is all just wishful gossip thinking. As far as we know Chelsy’s out, Cressida’s in and ready to stay. Harry and Cressida could stay happy forever, right? They could be the new William and Kate – the perfect prince and princess or duke and duchess or whatever. But when has Harry ever been conventional?

Will you miss the Prince Harry/Chelsy Davy romance? Does Cressida have what it takes to keep Kate Middleton on her toes or will she be just as “plastic”?