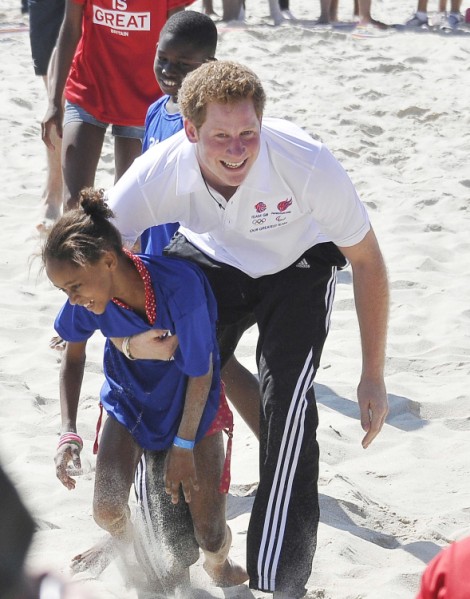 Princess Diana’s name can still save a bad PR job and/or reputation. It’s just a fact. Whenever the princes (and now Kate Middleton) get into little jams they usually talk about her for a few seconds and all is forgiven. I’m not exempt in this either! The second one of those guys said “mother” even I get wishy washy and all forgetful about ball cupping Vegas scandals. You saw Prince William bring out the big guns when he and Kate were crying over her naked scandal this summer likening it to how Diana was always hounded by the press and we’re seeing it now with Prince Harry who came back from Afghanistan and bragged about how much he liked killing people which didn’t help since he was still on Vegas probation anyway.

Harry mentioned Diana is his speech when he traveled to Africa last week to promote his Sentebale charity and delighted just about everyone with charming pics of himself mucking around with kids. He’s adorable. You add Harry and children and Diana and it’s always a winning combination. But now he’s taking his charity work one step further and one step closer to his mother. It was just announced by the palace that Harry is a patron of Halo Trust and will be taking a more active leadership role in ridding the world of landmines. Who could possible forget the pics of Diana in the minefields? They are some of her most iconic. And now check out Harry’s. It’s uncanny, right?

The Halo Trust/Prince Harry partnership makes great sense on paper. He’s in the army and has a great love of Africa and likes to spend as much time there as possible. But if I were Kate and William, I’d be pissed Harry’s getting this particular charity. There’s really no competing against it. I wonder if this went along with the ring trade. Princess Diana’s engagement ring initially went to Harry but he gave it to William to give to Kate. Did he negotiate his mother’s legacy in the trade? Because where we stand right now Harry has the chance to be a major charitable player and just as loved and influential as his mother. All he has to do is keep his d-ck in his pants. Or maybe he doesn’t. He’s shown he can basically do whatever he wants as long as he follows it up with stuff like this. Could he be the people’s royal over Kate Middleton? It doesn’t help that she spends more time shopping than working. And believe me, I know Harry is no saint. But this is brilliant PR. Kate and William really need to up their game because they are definitely found wanting after something like this.

Do you think the Prince Harry/landmine decision was a good fit? Does it make Kate look more useless, or worse, far removed from Diana?