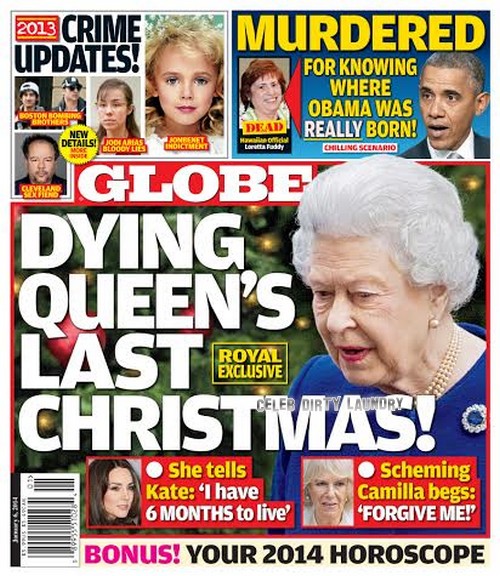 The holiday season is no doubt being met with a mix of emotions from the royal family. On the one hand Kate Middleton and Prince William are thrilled to be celebrating little Prince George’s first birthday. It has been a long time since there was a baby in the family and the littlest heir has breathed new life back into the family. Kate and Will also coming to grips with the notion that there’s a very good chance that this time next year Queen Elizabeth will no longer be with them to celebrate.

According to the Jan. 6th print edition of GLOBE Magazine Queen Elizabeth has informed everyone that she believes she only has about 6 months to live and has begun to make peace with the idea that her life is winding down. In the last year Elizabeth has suffered through various ailments including a heart problem. Some feared that she would die before Prince George even arrived and so the fact that she has been able to spend quality time with the baby has been a huge gift in itself.

Camilla Parker-Bowles is also singing a different tune according to the Jan. 6th print edition of GLOBE. Last we knew the duchess had her gin flasks confiscated and was drying out in India. She threw a full scale fit when it became abundantly clear that her chance at becoming the next queen was marginal at best. She went rounds with Elizabeth and after realizing that her approach was failing Cami has now resorted to being a British brown-noser. Slamming the royal family didn’t help her to bull her way towards the crown and so now she’s hoping that she can use kindness to win over Elizabeth. I wouldn’t hold my breath if I were Camilla though. It’s pretty obvious that respect and stature is something she’ll never gain.

The latest issue of GLOBE Magazine, January 6th print edition, has news on some of the most famous cold cases – with special 2013 crime updates – including on JonBenet Ramsey’s mysterious murder. There are also more questions on Obama’s background as well as your detailed 2014 horoscope. What better way to spend some quality holiday-season time than with the latest copy of GLOBE. When I get done working this morning I’ll be heading home and curling up with my copy. In the meantime, tell us your thoughts on whether or not Camilla will ever find favor with the Queen.