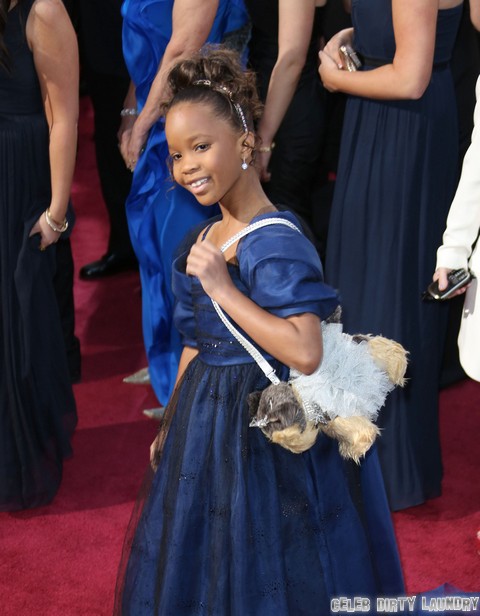 If you watched the Academy Awards last night then you no doubt caught a glimpse of 9-year old Quvenzhané Wallis who starred in Beasts of the Southern Wild.  She showed up on the red carpet in a horrid blue dress with her trade mark puppy purse and acted as if she owned the place. I’m not one to speak negatively of a kid but if you saw her interviews then you know that I’m not exaggerating.  Wallis was with her stage momma and her older sister that appeared to be dressed for a night of clubbin’ but that’s a whole other story.

Apparently many people were really kind of put off by Wallis’ lack of humility and humor site, The Onion decided to spell it out on their Twitter last night. They Tweeted that Wallis is “kind of a C*NT right?”  Yeah, they went there and their followers retweeted it hundreds of times before The Onion deleted the post. This morning came the inevitable apology,

“No person should be subjected to such a senseless, humorless comment masquerading as satire. The tweet was taken down within an hour of publication. We have instituted new and tighter Twitter procedures to ensure that this kind of mistake does not occur again. In addition, we are taking immediate steps to discipline those individuals responsible. Miss Wallis, you are young and talented and deserve better. All of us at The Onion are deeply sorry.”

Is she young and talented? Without question. Will her attitude make producers want to jump through hoops to sign her to their upcoming projects? Not so much. Wallis mother seemed to be very much in control of her daughters ittenery so let’s hope she gets her ego under control too. Conceited people are never fun. Especially when they carry puppy purses and belong on a school bus rather than a red carpet.

The Onion’s comments were offensive to some, but did you get that same vibe from Wallis that they did? Tell us your thoughts in the comments below!