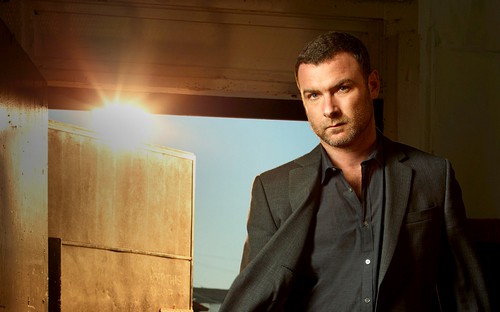 RAY DONOVAN is Showtime’s must see hit of the summer  and that is saying a lot considering that only one episode as aired so far. If you have yet to watch the premiere from last week, then be sure to check our recap from the killer episode.

Last week viewers were introduced to Ray, played by hunky Liev Schreiber, a professional fixer guy who caters to the rich and famous in Los Angeles. Basically he makes bad situations go away for the eilte of the eilte in Hollywood. Throw in a father recently released from prison, who also wants revenge on him, plus a jealous wife and you have all the makings of one hot drama. That is exactly what this new Showtime show is and it is freaking amazing.

In tonight’s episode titled “A Mouth Is A Mouth” Ray has his hands full as he solves yet another set of problems of action hero Tommy Wheeler, who is being blackmailed with a sex tape involving a transvestite. He also solves another case that involves an A-list actor and a threatening message. That is just professionally, in his personal life he sets a plan in motion to send his father back to prison. His father Mickey, played by Jon Voight, has other plans though and spends time with Ray’s wife Abby, played by Paula Malcomson and their kids. It is a serious betrayal that will have lasting implications.

The show may be only a week into it’s first season but Ray Donovan has been quickly added to my list of summer shows and it should be added to yours too. It has all the makings of a yet another Showtime hit, great cast and suspenseful storyline that will keep you coming back week to week. While you wait for our recap be sure to let us know what you think of the new show, as well as check out the below sneak peek from tonight’s episode.

The show begins with Ray waking up at his place in the city. Then it switches to Abby waking up at home. Back to Ray cleaning off the baseball bat he killed the stalker with. Abby comes down stairs to see alcohol everywhere.

Mickey spent the night at Abby and Ray’s. He makes Abby and kids breakfast. Ray takes Terry to doctor who ask him about Bernadette, who passed a long time ago. The doctor gives him a shot in the neck.

Ray calls Abby tells her he wasn’t with the girl and they should talk. She gets anxious when she learns he is headed home. She quickly ushers Mickey out of the house.

Terry and Ray leave the doctor office, as Ray mentions the doc liked Terry and he should ask her out. They head to the gym and find Bunchy drinking. Ray blames Mickey.

Lee yells at Ray for breaking Stu’s hand. Ezra walks in to Stu’s yelling session. Lee orders Ray to make nice with Stu. Ezra wants to know what he and Ray are going to do about Mickey.

Sean Walker A list actor doesn’t show up for work. Ray and Ezra head to his house to discover he is being threatened Mickey. Turns out Sean was part of setting up Mickey and sending him to prison.

After Ray bails on her to talk Abby the kids and Mickey head to Malibu.

In rehab Tommy rehashes the scene with the dead girl in group session. He waxes poet about her spirit leaving and the girl being free. He then receives a message on his phone of him having sex with a guy. He immediately calls Ray who tells him to send him the tape and then delete it. Ray watches the sex tape of Tommy going down on a guy.

Sean freaks when Ray is not paying attention to him. Ray tries to reassure Sean it will be ok, especially after it is revealed Sean has a daughter. Sean talks bout how he make the world a better place. Ray gets security tapes from Sean.

Mickey pays Abby and Bridget to go away so he can spend time with Conor.

At the gym Daryl talks to Terry about fighting as they spar in the ring. Bunchy looks for Mickey when Terry lashes out at him he goes through the office looking for drugs. Terry catches him and locks him in the office, where there are no drugs.

Ray visits Tommy at rehab and learns Tommy has the number of the tranny who is blackmailing him with the sex tape. Tommy calls and learns Chloe wants $1 million, he sets up a meeting per Ray’s orders.

Abby spends some on one time with Mickey as he keeps throwing money at the kids. He asks about her marriage, she tells him it is private. She wants to know why Ray hates him so much. Mickey reveals he was a terrible father, talks about his days as criminal and doing drugs when his kids were growing up. Abby and Mickey build a connection.

Ray has Avi look at Sean surveillance tapes as Avi tells him that Chloe is really a guy named Steve.. Ray meets with Chloe at a restaurant. She claims to never have done this before and feels bad. She wants to change her life and Tommy is her chance. Ray cuts to chase and she admits she wants the $1 million. Chloe ‘s boyfriend is there too Ray has him leave. Chloe tells Ray she is using the money for a sex change. Ari is listening to the whole conversation. Ray tells Chloe he will be in touch.

Lena reveals to Ray that there was a priest killed and she also tells him the kids school called saying the kids were not there. Ray calls Abby who screened his call. When he calls Connor he answers, Ray hears Mickey’s voice and learns they are in Maibu. Ray looses it on Avi who pulls a gun on him to calm him down. Avi tells him to think about what is going to do and assures him they will handle it.

Ray breaks into Chloe’s houses punches her boyfriend and takes all copies of the tape. He lets Chloe know, as he is choking her, they have her on tape and if she threatens Tommy again she is dead. Chloe says she understands and breaks down. Ray talks to her about the path she is walking down tells her to stop doing drugs and giving head in the streets. Chloe says he doesn’t know anything about her, Ray says if she keeps it up she will be dead, ind of a nice yet weird bonding moment between the two.

As they leave Malibu Conor wonders how mad Ray will be. Abby assures her son he didn’t do anything wrong. Mickey lightens the moment with the kids.

At the studio Ray meets with Stu and discovers yoga girl there. Stu says she is his girlfriend again. Ray shows him the tape of Tommy and Chloe, then demands him to open the safe and Ray takes money from him.

Abby drops Mickey off at the gym. The kids take a picture with him and Bridget runs into the gym to take a pic with Terry and Bunchy for her family tree. Inside Mickey bonds with the family. Abby introduces herself to Daryl but does not introduce the kids to him yet.

Later that night at the gym Ray confronts Mickey about spending the day with his family. Ray then talks to his father about how he deserved to be in prison and worse. He then says he is going to give it to him. Ray tells Mickey he won’t see it coming. Terry watches the exchange.

As Ray and his crew watch the tapes from Sean’s house they learn that Daryl was at Sean’s house and Mickey was in the car with him.

Terry looks at the tattoo of his wife in the mirror.

Tommy is scene at rehab in a robe with a girl. The girl is wasted. Tommy is instant messaging with Ray’s son Connor.

Bridget puts the new pictures on her family tree.

Avi beats the crap out of the black boxer fro the gym and staples something to his chest. Ray meets with Sean and tells him that he knows who broke in and they will never break in again.

Lena takes the money Ray got from Stu and gives it to Chloe. She says Ray wants her to use it for the operation.

Mickey gets high at the gym. Terry finds the black boxer with the picture stapled to his chest.

A group of priests are seen praying together.

Abby waits at home for Ray, who is at the time learning who the priest was that his father killed.

What an episode that was folks! I don’t know about you but I loved it. This show just gets better each week and only two episodes have aired. What is going to happen between Ray and Abby? Will Mickey and Ray come to blows over what Ray did? You will have to tune in next week to find out. Until then my friends.