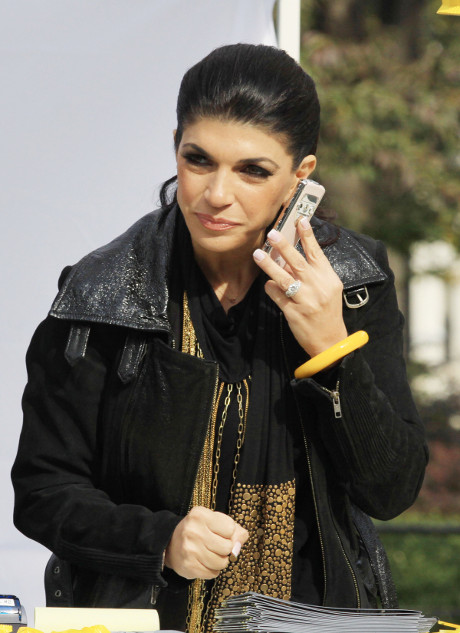 The September 8th episode of Real Housewives of New Jersey season 5 episode 15 is titled “Zen Things I Hate About You” and it documents the final day of their Arizona trip. On the agenda is a high wire team building activity. Two people climb up and have to physically lean on each other to walk across two thin wires to the other side. Teresa Giudice and Poison Joe Gorga work together great. Teresa said “I want Melissa (Gorga) doing this.” J-Lo Light finally gets on the high wire and tries to walk across the narrow wires with her sister-in-law.

Teresa says “We can do this and then we are never going to fight again.” The two women don’t get too far going across the wire before they fall. The team leader says they did good together but leaning on each other also made them fall. Caroline says these two women still are not in a good place, even though things are better, and that’s why they didn’t finish the task. Honestly, Melissa doesn’t make it easy for Teresa to want to be close to her.

Teresa can sense that J-Lo Light is still not ready to finally forgive her for the things she has said and her alleged involvement in Strippergate and the cheating rumors. I can understand Melissa’s feelings. I think her husband and the rest of the group are pushing Melissa before she is ready. Melissa was humiliated and continues to have her reputation attacked.

Later at dinner J-Lo wannabe is thanking everyone for their friendship but snubs Teresa. Later, the group is doing a toast and then Caroline opens her big mouth. The red-haired dragon says we’ve toasted before and then it’s fallen apart. Speak up now and clear the air. For once Caroline is right. Poison Joe wants to speak up. He says he is still getting nasty Tweets regarding rumors of cheating. He tells Teresa he is unhappy with her acquaintance Penny. He feels she is the source of the rumors. Poison says “We have these enemies that we don’t even know saying stuff about me.” “So you think I would tell her secrets about you?” Teresa asks. “Yes,” Joe replies.

Teresa wants to check out of the conversation but Poison and the group won’t let her. Poison wants Teresa to prove honestly that she is on his side but putting Penny in her place. Previously Teresa was asking Penny to says she was not involved in started the rumors and fanning the flames. Penny tells Poison and Melissa that Teresa had nothing to do with any of it. Poison and Melissa felt Teresa was trying too hard to prove her innocence.

I think Teresa’s problem is fear her feelings and not want to explore them. I think this is why she didn’t do well with the horse exercise and why people think she is superficial. Her friendship divorce with Jacqueline Laurita was due in part because Teresa would not confide in her, and then Jacqueline would read stories about her supposed friend in the tabloids.

Teresa finally says a little more about the situation. Her brother is listening intently. Teresa says Jan and Penny became friends. They talk to each other and their friends. This is where the rumors started. Teresa says she is on board to tell Penny off. I hope Teresa is being sincere. I get the feeling Teresa is afraid to speak up on Melissa’s behalf. She may be afraid of angering people and losing their friendship or losing business for her ventures.

Teresa said at the Milania Hair Care event she did not want to jump into the argument with Penny unless Melissa insists. I think Teresa wants to stay out of the fight, thinking it’s not her business. However, by doing so she gives the impression she doesn’t care. Dr. V called Teresa a dumbass when she did not speak up for Melissa in the past. I think Teresa is finally getting it and will prove once and for all she never wanted to hurt Poison and break up his marriage.