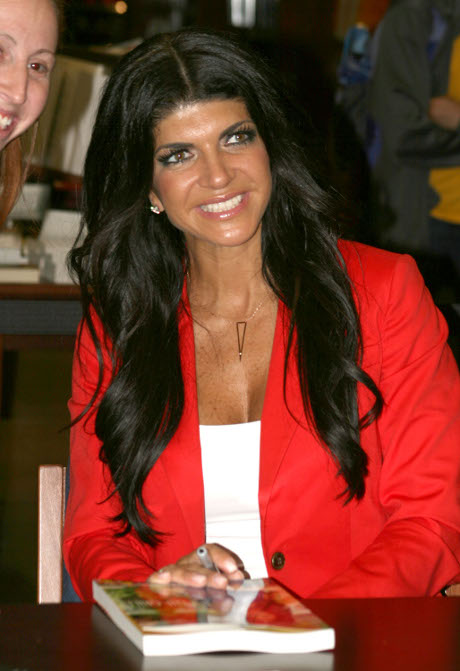 Despite claims that Joe Guidice cheated on her with their nanny, Real Housewives of New Jersey star Teresa Guidice is sticking by her man. A new report from Life & Style states that Joe and Teresa’s 13-year marriage may be in jeopardy thanks to Joe giving into temptation. The report claims that Joe cheated on Teresa with their 20-year-old nanny Nicole Cemelli.

The report claims that Joe was attracted to Nicole because she looks like a younger version of Teresa, and the source adds, “The rumors of Joe’s shameful philandering have run rampant since the show premiered in 2009. Teresa comes from a very religious Italian family that doesn’t believe in divorce – that’s why she’s put up with so much.”

However, Teresa slams these rumors, claiming that they are NOT true. She wrote her blog, “[Me and my husband have known Nicole] since she was in high school. No secret. No mystery… What’s unfair and completely disgusting is that you would drag every person we ever speak to into your fake stories.” She also adds that Nicole is, “freaking out now… getting harassing calls at her work, being stalked on the Internet, and even followed.”

Not that I ever did, but I believe Teresa even less after she added that Nicole is getting harassed at work. Does anybody even care about Teresa Guidice and the Real Housewives of New Jersey so much that they’d actually spend valuable time out of their day to go and ‘harass’ someone? I think not.

What I do believe is that Joe cheated on Teresa, which is pretty much an open secret at this point. Teresa tries to claim that her family is getting hurt by these rumors, but to that I say: you are on the freaking Real Housewives of New Jersey, and your private life is put out there for the world to see. Are you really going to pretend like a couple of tabloid reports, which you/someone close to you probably leaked, are ‘ruining’ your family? Give me a break.