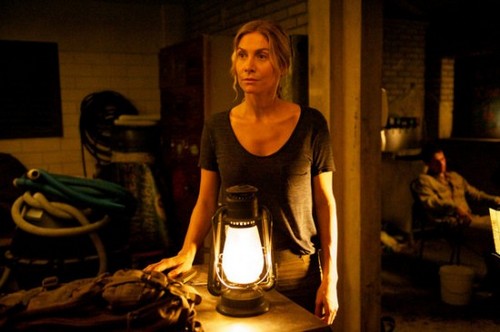 Tonight REVOLUTION returns to NBC with a whole new episode called “Come Blow Your Own Horn.”  On tonight’s episode Neville (Giancarlo Esposito) takes a gamble with the Patriots.Also starring David Lyons, Zak Orth and Zeljko Ivanek.  Did you see last week’s episode?  We did and we recapped it here for you!

On last week’s show when Rachel (Elizabeth Mitchell) discovered some unsettling truths, Miles (Billy Burke) does what he does best to overcome obstacles before him and those he cared about. Meanwhile, Charlie (Tracy Spiridakos) shared a moment with her mom as Neville (Giancarlo Esposito) and Jason (JD Pardo) continued with their struggles between father and son.

On tonight’s show as Miles (Billy Burke) and the gang try to escape the perils of their current situation, Rachel (Elizabeth Mitchell) and Gene (Stephen Collins) continue to struggle with their relationship, which affects Charlie (Tracy Spiridakos). Meanwhile, Neville (Giancarlo Esposito) takes a gamble with the Patriots.Also starring David Lyons, Zak Orth and Zeljko Ivanek.

The Patriots lost out on Aaron and even Monroe (although the don’t know the last part) but they do have their eyes set on the Matheson family. In order to capture the family they’ve enlisted Gene’s help. He makes a grand public plea for the capture of Miles Matheson – the former Lieutenant of the Monroe Republic. His daughter and granddaughter on the other hand are only kidnapped women. They’re completely innocent of any crime.

Meanwhile Rachel is helping Mile torture information out a patriot soldier. They need to know what they’re dealing with after all. It was Charlie that was topside watching her grandfather’s display. She understands in part why he betrayed them. She feels he must have had a really good reason. She tries to convince Rachel of this but her mother is too caught up in her anger. But will that anger make her do something she’ll regret?

They need an escape plan and so they decide to create a couple of bombs. However they might end up killing more than soldiers. Gene is with the Patriots. He has to be. It was the only way he could ensure his family didn’t get hurt but it also puts him directly in an angry Rachel’s path. She knows they have to leave the town. It’s too dangerous to stay and it’s too dangerous to leave Aaron with Monroe alone.

Aaron has an entirely different problem. Never mind Monroe is beginning to worry about why the Mathesons have reached yet. Aaron has to deal with a scared and possible furious girlfriend. He thought it was mostly fear until she came right out and asked what really happened to her husband. Because there was always something off with the way her ex died. That’s why Aaron has to admit to the truth. He was responsible but he couldn’t control it.

He never got the full opportunity to prove he was more than a liar that’s been shaking up with her. He noticed Monroe wanting to abandon ship. He was in the middle of trying to convince the only friendly soldier around to stay when they get attacked. Monroe comes out of it relatively unscathed but Cynthia and Aaron get taken.

Rachel was about to drop the bomb on Patriots when Miles stops her. He didn’t do it for Gene though. He did it after witnessing Aaron and Cynthia going inside. They were taken to base to finally figure out why Aaron is “special”. Dr. Horn can’t wait to learn the answers. He’s willing to begin to cut it out of Aaron if necessary.

Neville went to Allenford’s husband. He made a deal with him. He’ll let the husband claim the glory of turning an enemy of the state. The commander agrees but not for long. He doesn’t want his wife to get hurt and yet he knows (thanks to Neville’s insistence) that he can’t survive if he were to run away with her. It doesn’t really matter in the end. He could kill Neville but he’s already been warned there’s a second man watching over his wife.

Jason needs to be relived quickly. He’s not full de-programmed. He’s fighting it but he nearly killed Allenford when she did nothing more than try to bait him.

Gene was kidnapped. The guys wanted to know what was happening to Aaron and all he could say was that Aaron is alive…for now. He does admit he’s been helping the Patriots but he did it for medical supplies at first and for the lives of his family towards the end. He didn’t now what they were about until it was too late. Rachel wants to stay angry while Charlie wants to take him with them. It’s gene that decides to stay. He acts as a diversion for the rest of them even though he knows he’ll be signing his death warrant.

Horn watches Aaron’s body regenerate what he cut into. He sees it as a miracle like the old stories his bible thumping father used to teach him. He needs this miracle. For more than the patriotic cause. He’s dying from a brain tumor and with Aaron is his care, he’s going to find a cure or die trying.

Alllenford’s husband shows up. She tries to plead with him but it’s too late. He kills her. Neville taught him the value of the life he has now. Why would anyone want to give that up?

Horn attempts to try something else to open Aaron up. He’s going to torture Cynthia. Whatever Aaron has been doing with his mind begins to act up just like clockwork.