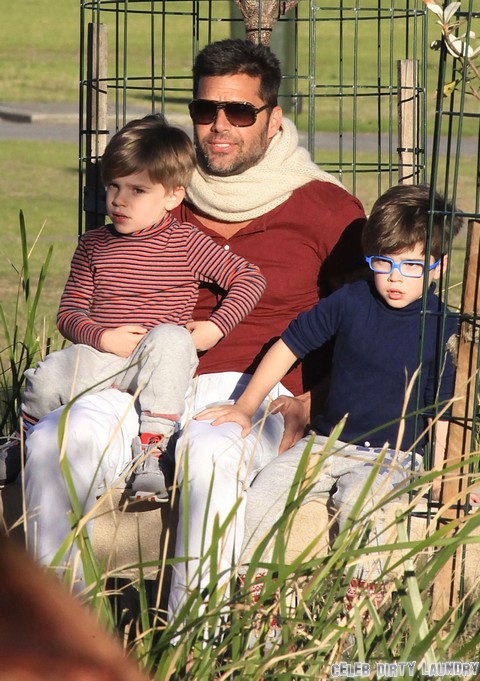 Ricky Martin was spotted hanging out with his twins in a park in Sydney, Australia this past Sunday. He looked rested and relaxed, with his boys sitting next to him in the sun.

He was spotted playing with them on the slides, monkey bars, and the other parts of the playground. His boyfriend, Carlos Gonzalez Abella, wasn’t present but that doesn’t mean anything – plenty of  fathers take their children to the park without their significant others.

Martin is currently taking a break from filming the Australian version of The Voice with Delta Goodrem, Seal, and Joel Madden. It’s interesting that The Voice Australia has such high profile judges, but Martin did admit that he studied the American version to learn from the group dynamics. He is reported to have said, “I saw the American version but I also saw the Australian version because I wanted to see the dynamic and I needed to start practicing. I would close my eyes and hit the computer and pretend! I would see that [the mentors] didn’t turn and I’d get kind of annoyed and think, ‘Is it me? Is it my judgement?'”

Martin still remains an incredibly famous name across the world, so if he did want to get back onto the music scene with a new album and new songs, I doubt it would be difficult to do so. However, the Voice [whether it’s the US Version or international versions] always has a way of revitalizing their judges’ careers [see: Adam Levine, Shakira], and it could do the same for Martin.

Anyway, these pictures of Ricky Martin with his children were too adorable not to share. Do you miss Ricky’s music? Or are you happy that he’s spending time taking a break and filming the Australian version of the Voice? Let us know in the comments.

Ricky Martin takes his twin boys Matteo and Valentino Morales to the park in Sydney, Australia on May 19, 2013.