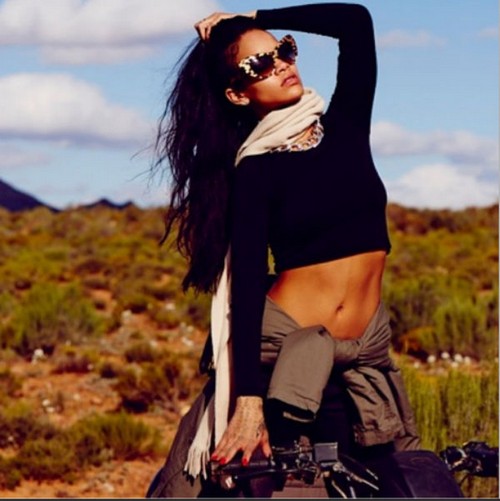 There were rumors circulating a while back that Rihanna had fired her best friend, Melissa Forde, from her staff. However, both Rihanna and Melissa were pictured enjoying some free time together on a safari tour in South Africa, and there are plenty of pictures to prove it uploaded by Melissa to her Instagram account.

It was rumored two weeks ago that Rihanna had fired Melissa from her team, due to a massive argument that led to Rihanna reportedly telling Melissa to pack up her bags and go home. The reports were never verified, but Melissa wasn’t seen with Rihanna over the next few days so everyone assumed that the rumors were true and that Melissa had been permanently fired.

However, now that the two are clearly back on speaking terms [or maybe never fought in the first place], it’s clear that the rumors were just rumors – or at least, the rumors were blown out of proportion.

One photo shows the two best friends posing together on a quad bike, with scarves covering the lower half of their faces. Others show Rihanna posing with various animals, and against various backdrops of the desert and landscape. And in the end, either Rihanna and Melissa had the shortest fight ever, or they never fought in the first place.

What do you guys think happened? Do you think Rihanna and Melissa did have a fight, and make up really quickly? Or was Melissa just taking a small vacation, and the tabloids just assumed that she had been fired? Of course, if the fight was as serious as the rumors were making it out to be, I think it would have taken longer than two weeks to reconcile.

Let us know what you think really happened in the comments.