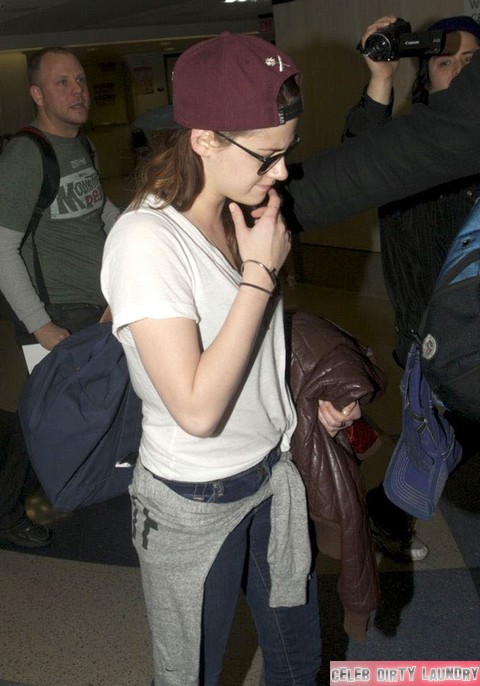 Was it Robert Pattinson who convinced Liberty Ross to file for divorce? You may have thought that time had washed away Kristen Stewart’s cheating scandal, but it’s rearing its ugly head once again! She and Rupert Sanders had a steamy affair last summer, and since then she’s been disgustingly unapologetic, despite having destroyed a family. Maybe, years from now, she’ll take the LeAnn Rimes approach of  “you can’t break something that’s already broken”!

She and Robert Pattinson reunited just in time for the Twilight promotional tours last fall, but their romance has been on the rocks, chipped at by petty fights and box office failures. We reported that, not only did Liberty Ross finally file for divorce from cheating husband Rupert, she and Rob bumped into each other at the Golden Globes on January 13!

This time line can’t be coincidence: Rob acts as if everything is just fine between him and Kristen, but we haven’t seen photos of them smiling together in months! Rob jumped at the chance to film for three months in Australia, and Kristen is worried the distance will prove to be too great for their relationship. So what changed for Liberty that she is suddenly filing for divorce?

Two weeks ago, Liberty and Robert bumped into each other at Circa 55, a restaurant at the Beverly Hilton Hotel. An eyewitness reported to Life & Style, print edition February 4, 2013, “It must’ve been really uncomfortable.” Though Rob reportedly left soon after her arrival, we’re wondering if something else went down between them!

Rob is reportedly unhappy with Kristen, and is probably only staying with her for the fame. He and Liberty have a lot in common—they were both betrayed, publicly humiliated, and then didn’t have the personal strength to dump the cheater for good. Have they found some solidarity—is Rob going to dump Kristen, following in Liberty’s footsteps? What do you think Rob and Liberty should have done after news of the affair broke? Is there any real love between Rob and Kristen anymore?