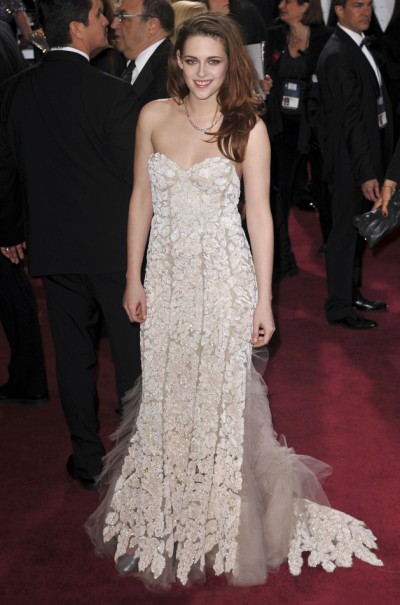 Guess what? Things may not be totally over for Kristen Stewart and Robert Pattinson after all. The actor headed to Australia in mid-January to shoot The Rover and reportedly split with Kristen before leaving. At the time he didn’t want to be attached to a girlfriend that he couldn’t trust while in the same state let alone in another country. He left and Kristen was spotted sulking even more than usual. We all wondered if she’d hook up with Rupert Sanders again since they were both free and single, but it seems like she kept her distance, even while Rob partied and dined with hot chicks.

Rumor has it that after a month apart they are talking and texting once again. Kristen has wanted to hop a plane to visit him on set but so far has held off on making that long trip. The actor has reportedly had a hard time getting her out of his system and letting the love die.  He did however make a huge mistake by not calling after her Oscar presentation, according to Hollywood Life,

“Kristen Stewart was VERY depressed at the Oscars. She thought Robert Pattinson would at least call and congratulate her but he didn’t at all. She kept her phone near her and checked it for texts but they never came.”

Perhaps Rob saw her hobble on stage, looking like a miserable bitch and realized it wasn’t exactly her best moment. Certainly not one worth congratulating!  Maybe she was acting out because they hadn’t spoken and it made her mad (or madder than usual). Do you think these two will reunite once again once Rob is back on American soil? Do you hope they giver it yet another try or should they just accept that things are over and they are much better off apart? Tell us your thoughts in the comments below!