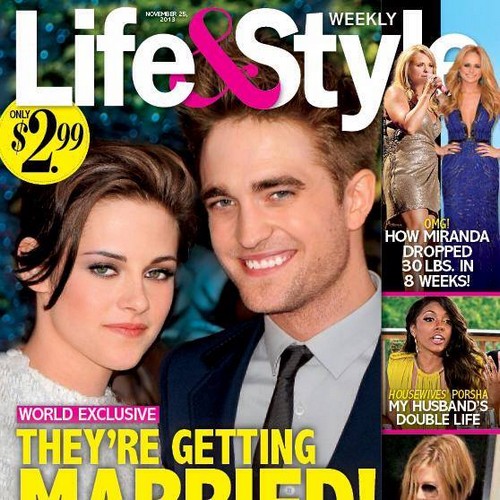 Twihards’ might be a happy bunch once again if these reports that are leaking out are true. Depending upon who you listen to, Kristen Stewart and Robert Pattinson may have patched things up after a six month split. We do know that their relationship officially ended last spring, but there have been a few overnight playdates in recent weeks. Apparently Kristen truly believed that if she could get Rob back in the sack then she would win his heart again. I guess she’s way better at sex then she is at appearing happy or grateful, but whatever.

According to the Nov. 25th print edition of Life & Style magazine Kristen’s plan has not only worked, but Rob might just be ready to marry his former trampire. This would seem to go completely against the recent behavior of both of them, wouldn’t it? I mean he has been parading Dylan Penn around and Kristen has been hitting the lesbian clubs while filming in NYC- leading to interesting speculation. Perhaps they’ve both had an epiphany and realized they belong together?

How the heck did Miranda Lambert drop like, 30 pounds in 2 months? Well my guess is that it’s because her man keeps cheating with younger, thinner women, but Life & Style has all the details on her diet and exercise revamp. Speaking of messy relationships, Porsha Stewart of RHOA fame is finally dishing on her failed marriage and even she is pondering whether or not her husband was on the DL and she was his beard. Do you think that Kordell is actually gay? Tell us your thoughts in the comments below!