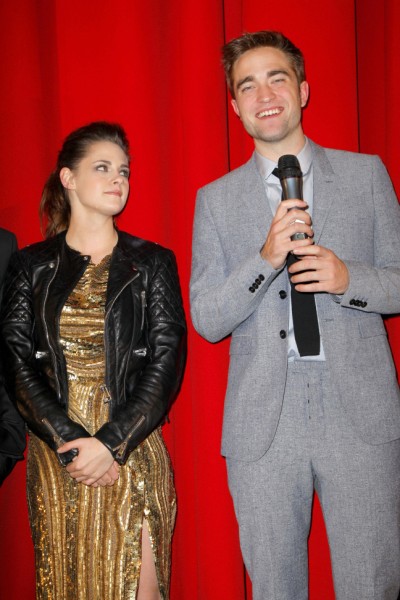 I don’t care what anyone says – that dude looked just like Rupert Sanders. I know it probably wasn’t him. I (like to think) I know Kristen Stewart isn’t that dumb… but damn! That was uncanny! And I still kinda think it was him despite EVERYONE telling me it wasn’t. Whatever.

So Robert Pattinson has a little sick sense of humor on him and he wanted to play a practical joke on Kristen regarding the alleged Rupert/valet hook up. According to The Sun, Rob created a mock message of a lie detector appointment for Kristen to prove that she remained faithful while he was away in NYC. But obviously it was a joke and obviously the couple are doing better than ever as evidenced by their frequent concert going schedule. The world is as it should be Twihards.

This is a crazy story, right? Here’s how I look at gossip from some of these tabloids. Sometimes the stories are just too out there and stupid to be made up. I think they’ve got to be real because who in the world would take time out of their lives to weave a story that insane? This is one of those instances. I could see Rob doing something this stupid and inappropriate to make light of the 700-pound gorilla that has no intention of leaving their back story any time soon. How The Sun knows about it, I have no idea but I’m gullible this morning.

Here’s another little piece to consider from this. Is Rupert Sanders a punch line in their relationship now? Is he a running joke? I’d think he’d be all Voldemort to them and they wouldn’t dare mention his name in each other’s presence. If that’s not the case, if he’s not only mentioned but ridiculed, then Rob and Kristen must have reconciled healthier than I thought possible. Who ever thought a Kristen Stewart/lie detector prank would be good for a relationship?

Do you believe Robert Pattinson scared Kristen with his idea of humor or is this story ridiculous? OR is it too ridiculous to be ridiculous??