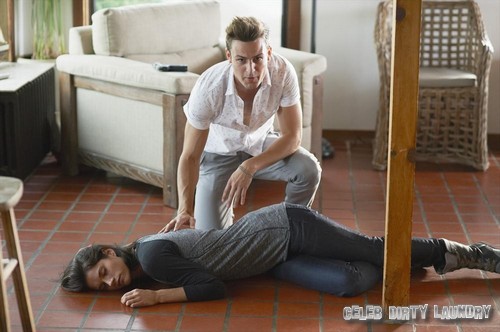 Tonight on ABC is the season 4 premiere of ROOKIE BLUE and it is called, “Surprises.” On tonight’s show Andy McNally and Nick Colleins return to 15 division from undercover duty to find life has moved on without them, leaving their personal and professional lives in disarray on the season premiere.

On the season finale last season when a violent child abductor escaped from an emergency hospital visit, the officers of 15 Division tried to track him down before he took another young victim. When Andy and Dov discovered that the desperate man had snatched another girl, Andy and Swarek found themselves in a deadly standoff to save the terrified victim, resulting in a major emotional confrontation — and a serious choice for Andy.  Meanwhile, Chris’ family obligations had him contemplating a transfer, and Traci and Gail each faced monumental decisions regarding their respective careers.  If you missed the season finale you can read our full and detailed recap here, to catch up!

On tonight’s show Andy and Nick continue to work undercover infiltrating a meth pipeline. However their covert mission goes sideways when Nick – then Andy – go missing. Meanwhile, a random arrest at 15 Division puts Sam Swarek and the other officers in the middle of the drug investigation-turned-rescue operation. Finally, Andy must figure out how to cope with the transformation of her own life as well as those of her friends at the station and continue to do the job she loves.

That’s what being a cop is: adjusting to new situations, rolling with the punches. Change is constant, and if you don’t adapt, you’re left behind. So when Andy returns to find that Sam Swarek is now a Detective and that he’s moved on, she’s going to have to figure out how to deal with it. Meanwhile, Dov’s life gets awkward when a one-night stand with Frank’s goddaughter becomes more complicated. Chris is torn between staying at 15 Division and moving his new family back to his smaller, safer hometown. Traci is learning to work with new detective Swarek while trying to move on from the loss of her fiance, Jerry Barber. And although Nick and Gail have cemented their relationship, Nick can’t seem to shed the feeling that all is not right between them. Last season, our officers got what they wanted and had to deal with the repercussions. This year, they will have to look change right in the eye and learn to adapt — leaving them with some big, bold choices to make.

Tonight’s episode is going to be an exciting one that you won’t want to miss, so be sure to tune in for our live coverage ABC’s Rookie Blue tonight at 10 PM EST! While you wait for our recap hit the comments and let us know how excited you are about the premiere of season 4 of Rookie Blue! While you wait for the recap, you can checkout a sneak peek video of tonight’s episode tonight below!

RECAP: Nick and Andy are by the pool and he pushes her in. All of a sudden, two guys storm the house with guns, they help themselves to beers. A thorough search of the coolers and the guys find some black bags and he tells Andy to repeat after him, “Steve McCowan runs meth”.

Chris at home and Dov asks him if he should be looking for a new place to live.

It is roll call, numbers are down for the station which means speed traps. Oliver is with Dov outside setting up a speed trap and he tells him to wear a vest but he doesn’t want to. Oliver tells Dov that he is trying to be a better man, better husband. They pull over a red sports car, Dov tells the guy that he was going fifty over and was driving wreckless. The guy offers to give them cash and Dov tells him he is going to impound his car and impose a huge fine.

Andy is writing in her diary, Nick is with her in their apartment when they get a knock on the door. Two guys walk in and take  Nick’s cell phone, they tell him it is new rules until the job is done. Then they tell Nick something about a boat that is coming in, he kisses Andy and says he has to go to work.

Dov is back at the station with the guy he brought in, the vehicle is impounded. The guy is in a room with Nash and Sam when the drug squad walks in and tells them to let him go.

Andy is snooping around at the house where they had the pool party the night before, one of the guys walks in and catches her, she tells him she is looking for Nick. Then the guy asks for her cell phone, tells her it is new rules. Andy says it is outside in her back, he comes behind her and knocks her out. He then finds a gun on her, takes it.

Andy is now on a floor of a truck being taken somewhere, she has tape on her mouth and she is tied up.

Nash and Sam are with the drug squad who is explaining about a drug drop and the guy they pulled over is Simon, he is key to the whole operation and they need him there to receive a shipment. Sam asks Frank what they are going to do, he says they are stepping aside like they were asked and letting Simon go.

Sam has a plan, he and Nash are worried that Andy and Nick’s identities are compromised and plan on moving in. The drug squad find out about Sam and Nash moving in, he is not happy but he soon finds out that they may have a lead, but he doesn’t care because he already knows everything. Sam tells him to pull their people out, he can’t because he hasn’t heard from them – he calls it a glitch. Frank is angry, he is going to go in, it’s a warehouse take down and they are going out without a warrant because they cannot risk the safety of Andy and Nick.

In the warehouse, a guy takes the tape off Andy’s mouth and unties her. Basically the guys they are with are looking for the leak and they tell Nick to prove that it is not him by shooting Andy. One of the guys pulls a gun on Nick, he tells him that there is no choice it is Andy or the two of them. All of a sudden Frank and the team storm the warehouse, but they are not near Andy and Nick. They keep pressuring Nick to shoot Andy, he pulls the trigger but the gun is not loaded, they were just testing him.

Andy gets to a phone and manages to call Sam for help. Andy is really mad with Nick and tells him that she is sick of the whole thing. The two are back in the truck that Andy was transported in, they open the garage door and it is Sam to the rescue. Andy is near breaking down and Sam tells her it is good to see her.

Cruz gives Andy and Nick a drive back to the station while the rest of the team finds the meth.

Chris got the transfer he wanted, he needs to decide if he is going to leave. Nick says hi to Gail and she hits him in the face, then jumps on him and hugs him. Andy goes into the kitchen to see Sam and finds him kissing Cruz who he tells that Andy coming back makes no difference.