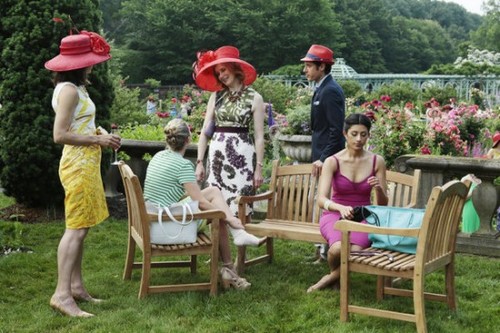 Tonight on USA Network ROYAL PAINS continues with a whole new episode called, “Pins and Needles.”  On tonight’s show Hank and Jeremiah don’t see eye to eye on how to best treat Hank’s pain.  If you missed last week’s show you can read a full and detailed review of the episode. [CLICK HERE]

On last week’s episode an unexpected visitor and a major auction at Shadow Pond thrust Hank, Evan, and Paige into an unfamiliar, high-stakes world that requires them to pull together like never before. Meanwhile, when Divya treats an older couple, who aren’t about to let their age slow them down, she realizes the pace of her own life has changed in unexpected ways.

Tonight’s season 5 episode 9 looks like it is going to be great and you won’t want to miss it, so be sure to tune in for our live coverage of USA Network’s “Royal Pains” at 9:00 PM EST! While you wait for our recap hit the comments and let us know how excited you are for the season 5 episode 9 of Royal Pains tonight.

Memories of his cousin still troubles Boris. Somehow he can’t get the picture of him killing Milos out of his head.

For the time being Evan’s political race has taken over Hank Med. He tries to rope in the others like Paige but they’re too busy. Paige has to fix Boris estate now that he’s alive again. Yeah even she figured it’s weird saying that. And Hank is too busy trying to ignore board meetings with the hospital. Usually he would have sent Evian but Evian can’t make it so he sends Jeremiah.

Hank makes it to the hospital to only have missed the whole meeting. While there though he does get to see his new boss gets flowers from his lawyer. It seems those two are still dating. Surprisingly, no one has mentioned conflict of interest just yet. What Hank does notice is the delivery guy shaky eyesight. The poor guy thought he was picking up flowers but picked up cactus instead. He’s ok for. That is for now but when has Hank’s patients ever been fine after on diagnosis.

Evan is truly messing up but to be fair he did try to be a good guy. He purposely ran into a political blogger who was going to be the moderator later on his debate. He noticed that there was something wrong and she admits to having a headache. Him being Evan tried to pull one of Hank’s moves of curing it but only ends up getting massacre in her eye. So he deiced to bring out the big guns by calling in Divya.

All Divya can do is gave her over the counter pills. Which was helpful but Evan was expecting a savant. He did however learn something. Before Blythe controlled the counsel it was ran by the blogger’s grandfather.

Hank went with Boris to the prison hospital to see Milos but Milos has completely lost sense with reality. Later Hank is returning to the house when he sees Jeremiah waiting for him. Jeremiah wanted to meet privately to explain that he won’t be providing Hank with any more pain medication. Jeremiah is worried that Hank is addicted. Hank denies and yet Jeremiah won’t cave. Things continued to be awkward between them even as they do a follow up check with the florist, Felix. Again he’s fine but with the boys bickering could they have missed something.

During his sleep test, Felix shows signs of extreme disturbance. In his dream his plants have come to life to kill him.

Paige may have turned down the offer to help Evan’s campaign because she’s jealous of all the time it takes away from them as a couple. She tries getting his attention but he’s too busy figuring out ways to win. Especially when he sees his blogger have an accident so he calls Divya again to help the blogger out. He still hasn’t won any brownie points and it’s hard to do that with Blythe always around the girl.

The two have forgiven each other remarks with neither giving an each when they get Felix’s results. He’s been having seizures in his sleep. They go driving to meet him and they see him in the street in an obvious dream state. He was trying to pick flowers. The doctors save him from getting hit by a car but he does injure his eye.

At the hospital they tell him he was born with this condition that’s perfectly manageable by medication. Growing up he always felt weird and now he learned he had a condition. But he’s able to finally gain courage to ask a nurse out.

Divya picked up on why the blogger has been having accidents. She’s on the brink of a stroke at any moment. Hank and Divya pull her away causing the debate, which Evan was winning, to be cancelled. Yet Evan isn’t giving up. He will take down Blythe.

After seeing Milos, Boris is worried that he can still fall fatally ill to the family curse. Although Hank taught him to look on the Brightside. That makes him what to spend whatever time he may or may not have left with his wife and son. As apology he left Paige with a valuable to go up on sale with her collecting a commission. He’ll be too busy traveling with the family.

One more thing to do before he leaves. He goes back to visit Milos. Just like when they were children he read him the old fables.

Hank gets more meds but Jeremiah warns him that he’ll be monitored. No one can handle a junkie dealing with the new administration.