Ryan Gosling Is The Perfect Boyfriend, Actor, and Human Being — America’s Most Wanted Man! 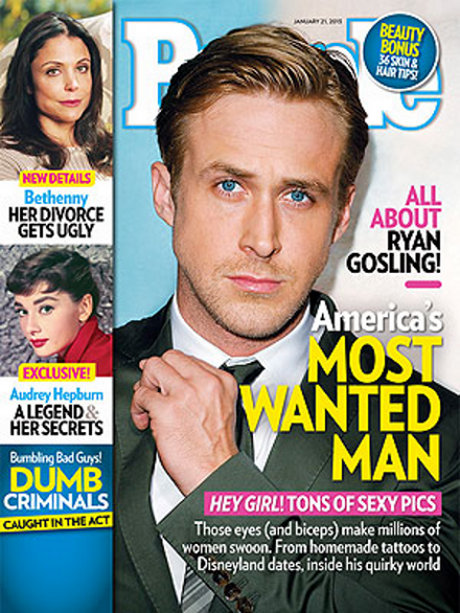 Ryan Gosling’s relationship with Eva Mendes makes many people jealous. He’s one of the hottest actors in Hollywood, while Mendes is the source of many an artist’s inspiration. This week’s People magazine cover story shows Gosling in all of his “hot actor” glory with the tagline: “America’s Most Wanted Man”. Sources for People magazine reveal that Gosling “is an incredibly sweet boyfriend” and that he and Mendes “get along so well because she’s not needy or smothering. They just work.”

Gosling’s mother, Donna, was his date to the recent premiere of Gangster Squad in Los Angeles. The film’s director, Ruben Fleischer couldn’t stop praising Gosling for being “funny and charming.” He also told People magazine that “When you’re with [Gosling] you feel different. He has a magnetic quality – larger than life.” The insider added, “Women love him because he’s just kooky. He’s definitely in touch with his childlike side.”

How does he do it? Well, with charm and bedroom eyes mostly, but also with his innate acting ability. His film roles usually see him in either a strong, romantic lead, or more quirky and perturbing in indie films. He has the perfect balance down in his professional life, and looking at the comments about people who have worked with him, it looks like Gosling also has his personal life down to a tee.

This former Mouseketeer started out in the film industry at a very young age. In the year 2000, Gosling moved away from child acting and entered the world of independent cinema. Soon after, he was cast in The Notebook and Half Nelson, and literally, overnight, Gosling became a superstar in his own right.