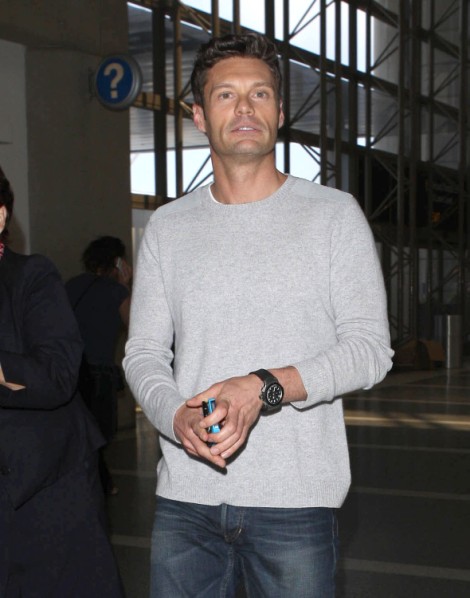 This didn’t take very long but I suppose it’s best not to over-think when a Sports Illustrated model is knocking at your door. Ryan Seacrest is rebounding from his long-term relationship with Julianne Hough with model, Dominique Piek. She used to date Chris Pine. I suppose this is called trading up although I doubt Piek can dance and star in such blockbusters as Rock of Ages and Safe Haven.

In Touch Weekly has the exclusive. A source said the mega producer/host and the South African beauty have been out to dinner a few times in the last couple weeks. It’s quiet and still in the beginning stages but it’s showing lots of promise.

So is Ryan Secreast a part of the cool guys club now? The club with members like Jake Gyllenhaal and Leonardo DiCaprio who only date Victoria’s Secret and Sports Illustrated models? Well, good for him. I really liked Julianne. I thought she was super cute but she was much younger than him. So who knows if that has something to do with their demise. Interestingly enough, I just ran past a blind item that sounded a lot like Ryan and Julianne. Let me preface this by saying I have no idea if it is about them but many of the commenters assumed it was. Apparently a cute couple just broke up but the chick was just bearding for the dude anyway. He was actually dating her brother but that relationship fizzled so he broke off the bearding relationship as well. Many assumed it was Ryan and Julianne’s brother, Derek, who were really dating. Again, just speculation. I have no idea if this is remotely true.

But how could it be, right? He’s dating Dominique Piek. Ryan Seacrest couldn’t possibly be gay! People never hide their sexuality in Hollywood!