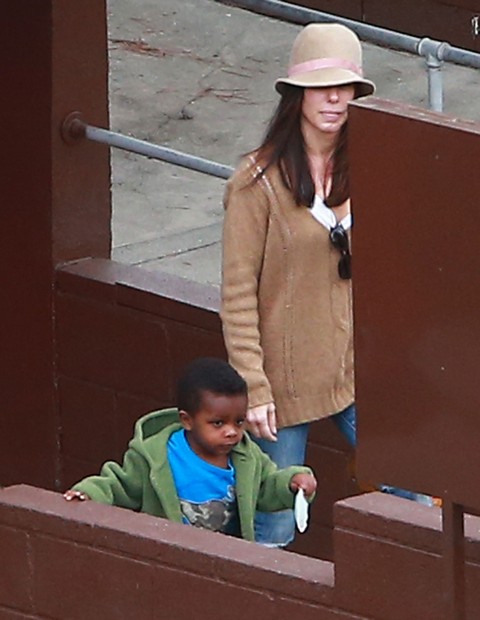 There’s stupid and then there’s Jesse James. He’s the idiotic Nazi that cheated on then-wife, Sandra Bullock with a parade of tattooed, skanky looking women a few years ago. The couple divorced in 2010 and the relationship seems to have left Sandra broken to this day. In the three years since they’ve split, not once has she been photographed with a single date. She has turned her complete attention towards adopted 3-year old son Louis and seems to have completely sworn off of men. Those close to the actress say that the public embarrassment completely changed her. Instead of being the out-going, girl-next-door Sandra has become quiet and closed off.

Apparently Jesse thinks he knows exactly how to nudge his ex towards moving on with her life. According to the March 25th print edition of Star, he actually had the nerve to invite Sandra to his upcoming wedding to heiress Alexis DeJoria.  Her father is John Paul DeJoria, a businessman that co-founded Paul Mitchell hair products, the Patron Spirits Company and The House of Blues. Supposedly Jesse has had a crush on John Paul’s business smarts and that carried over into a love affair with Alexis.

I guess Alexis is too blind to see that marrying this guy is likely a mistake – a sentiment that no doubt all three of his ex-wives will agree on. Supposedly Jesse has been reaching out to Sandra in small ways since they split. I guess he feels guilty and is always trying to win her forgiveness and approval. Maybe somehow he believes that if she shows up at the wedding then it’ll mean that things are finally okay between them. The problem is Sandra wants nothing to do with Jesse and won’t be there to watch him make another mistake.

Can you believe that Jesse invited Sandra to his wedding? Tell us your thoughts in the comments below!