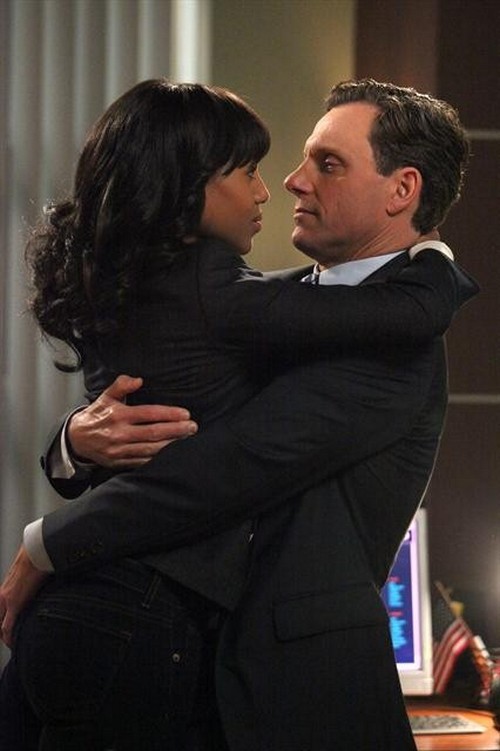 SCANDAL returns to ABC with a new episode called, “Nobody Likes Babies.” On tonight’s show the truth comes out. Did you watch the show before the hiatus. We did and you can catch up HERE!

On last week’s show after discovering the truth about the rigged White House election, the “Gladiators in Suits” realize that a quickly unraveling Olivia may not always wear the white hat. Meanwhile, Mellie is forced to take extreme measures to try and reel Fitz in.

On tonight’s show As David uncovers the truth about the Cytron case, things come to a head for Olivia, Cyrus, Mellie, Hollis and Verna. Backed into a corner, the five conspirators go to extremes and, in some cases, unconscionable lengths to protect themselves and/or the ones they love.

Tonight’s episode looks like it is going to be a great episode and you won’t want to miss it, so be sure to tune in for our live coverage of ABC’s “Scandal” Season 2 episode 13 at 10 PM EST! While you wait for the recap, check out s sneak peek video and some pics from tonight’s episode below!

Fitz is dead serious about getting out of his marriage to Mellie. He doesn’t care that she just delivered his baby and he doesn’t care how much America may hate him, he is divorcing his wife in order to be with Olivia. Meanwhile Olivia has somehow unraveled the truth and realizes that it was Verna who put a hit on Fitz. She wanted to clear her name and purify the country by getting rid of an undeserved leader.  Before dying of liver cancer Verna makes a call to David Rosen and tells him the truth.

Mellie is not about to hand Fitz that divorce either. She is threatening to absolutely bury him personally and politically- then turn around and run for office in spite of him. Meanwhile Cyrus isn’t trusting his husband at all. Before continuing a conversation Cyrus demands that he strip so that he can see that David isn’t looking for information. They both strip down and David grills Cyrus about helping to rig the presidents election. He admits that he stole the White House.   Cyrus believes that he was made to be the president himself but since he’s not so striking and likes to sleep with men he gets to stand behind the guy in charge. Cyrus says he was done losing and he needed a shot. After they finish fighting their baby starts screaming and David opts to sleep in the babies room for the night.

Abby is forced to listen to hours of tape of her and David Rosen. The content ends up nearly crusing her. She finally goes to Olivia and asks if the story about David beating a woman was false. Olivia admits it was. After listening to David tell her over and over on tape that he loves her, Abby runs to him and he admits that he does love her.

Quinn offers Huck 5 grand to kill Hollis for taking her life. He tells her he’ll do it for free but because it’s a revenge act she would have to leave her job and never come back because they don’t do revenge.

James is heading into court to testify and Cyrus has a hitman ready to take him out. The guy is inches from James but Cyrus can’t let him pull the trigger/ When James gets into court he lies and claims to know nothing at all about the voting machines being tampered with.

David shows up at Olivia’s offices demanding to talk to Abby. He insists she has the proof about the election rigging, she stole it from his safe. She plays stupid  and after he storms out reveals the proof that he insisted she had. Abby has proven her loyalty to Liv for sure.

Edison pays Liv a visit and she gives the ring back. She tells Fitz and he now has spun on a dime and decides that it’s a mistake. Sleeping with her is one thing but marrying her is another. Apparently Vera told Fitz on her death bed that Fitz didn’t really win the election. She tells him it was rigged and everyone but him knows. Vera tells him that everyone closest to him sold their soul for him. Vera tells him that she’s meeting with a federal prosecutor after he leaves. Fitz takes the oxygen mask off of Vera and watches her suffocate in her hospital bed.

Fitz tells Mellie that he thought it was her who tried to kill him. He knows differently now and he asks Mellie if she loves him enough to be on his side no matter what. The two share a kiss in the Oval office while Liv sits alone. Tune in next week to see what happens next!