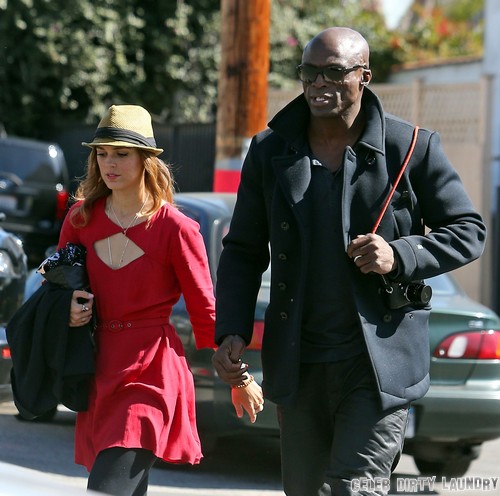 Now that Heidi Klum has moved on from her former husband, Seal, it appears that he has finally done the same. It took him long enough, didn’t it?

We’re sure it’s pretty hard for anyone to follow behind a super model, especially someone as pretty as Heidi, but someone had to do it. Besides, it sure does show that Seal definitely has a type, no? TMZ reports:

Seal has broken the seal … or so it appears … passionately embracing a beautiful mystery woman in L.A. yesterday.

Sources close to the singer tell TMZ, the woman is NOT his publicist, his assistant, his manager, or anyone else professionally related to him … which TOTALLY MEANS THEY’RE BANGING.

It’s the first time he’s been seen out with another woman since he and supermodel Heidi Klum split last year after 7 years of marriage.

The woman has been identified!!! She’s actress Erin Cahill from the ABC show “Red Widow.” We’re told Erin and Seal met two days ago at a charity function.

What do you think of Seal’s new lady friend? Is she good enough for Seal? Hit the comments and let us know your thoughts!