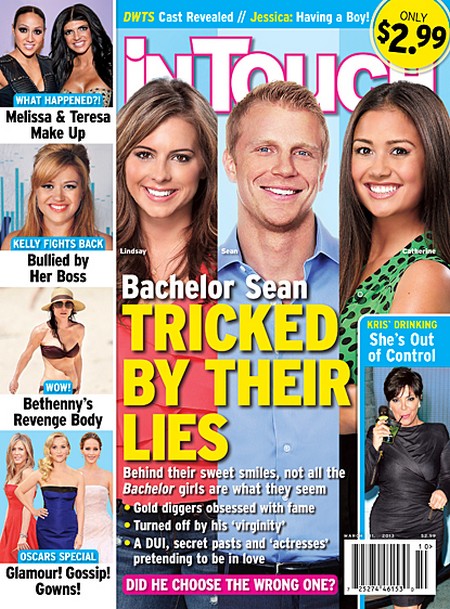 Hey guess what – all of those girls on the ABC reality hit show The Bachelor looking for a proposal were less than honest about their intentions! I know, you’re as shocked as I am right? Not so much. It seems that before Sean Lowe even had the opportunity to propose to the worst woman for him, the producers really stacked the deck to make sure that love was not bound to happen. Whoever was in charge of casting either didn’t really check into the backgrounds of the contenders, or else they wanted the behind the scenes scandal that has slowly unfolded all season.

Sean was supposedly looking for a wife, because he’s a relationship guy (don’t ya know?) and his quest for love has sort of blinded his judgment.  According to sources his final two picks have already thought about what they’ll do after either Sean doesn’t choose them or else when the made-by-television showmance crumbles. Lindsay Yenter is a model from NC that already figures she’s perfect to be on the next season of The Bachelorette.  In Touch Magazine says that Lindsay is way more interested in her 15 minutes of fame than she is being in love and that was her true motivation for signing on. Catherine Giudici is the rumored winner and a graphic artist with major career aspirations. The Seattle based 26-year old is wanting to launch a career in NYC and already has had publicity photos done.

In other words, neither woman is truly ready to settle down and play housewife to Sean in a more traditional marriage. Instead they have clear cut goals that go against anything that he has claimed to want in a woman.  This morning we told you about Sean possibly hooking up with Emily Maynard again. Perhaps his engagement to Catherine already fell apart and he returned to Emily’s arms?

Will Sean find any sort of love on this show? Tell us your thoughts in the comments below!