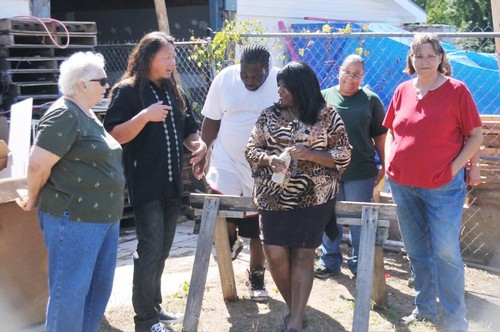 SECRET MILLIONAIRE returns to ABC tonight with a whole new episode called, “Wing Lam: Mobile, AL.” On tonight’s Wing La, Co-Founder of Wahoo’s Fish Taco, travels to Mobile, Alabama. Did you watch last week’s episode with Amos Winbush III, founder of a multi-million dollar technology firm? If you missed it we have a full and detailed recap here for you.

On last week’s show it was 2005 when Hurricane Katrina hit Louisiana and the Mississippi Gulf Coast, leaving a wake of destruction in her path. With so many local residents still recovering from the storm, Amos Winbush III traveled back to his home state with a mission to find deserving people and organizations in need. During his week-long visit, he met a number of grass-roots organizations that touched and moved him in amazing ways.

On tonight’s show Wing Lam is co-founder of Wahoo’s Fish Taco. With more than 60 restaurants in four states across the country, he made his first million when he was just 27 years old. Lam travels to Mobile, AL, a city still recovering from the devastating Gulf Oil Spill of 2010, with a mission to find deserving people and organizations in need. During his week-long visit, he meets a number of grass-roots organizations that touch and move him in amazing ways, including: Tri-Costal Community Outreach, a non-profit that provides immediate and long-term humanitarian services to low and moderate level income individuals and families in the Mobile area, as well as 15 Place, a day shelter that serves as a one-stop center for the homeless. The shelter offers meals, showers, laundry facilities and other assistance and programs to homeless men, women and children. Lam also meets a local crabber and spends time with his family, learning about the current state of the fishing industry. After a week of getting to know these people and organizations, he shares the surprise of a lifetime with them.

Tonight’s episode 2 looks like it going to be great and you won’t want to miss it. So be sure to tune in for our live coverage of ABC’s Secret Millionaire episode 5 — tonight at 8PM EST!

RECAP: 50 Year old Wing Lam is living the American dream, he was 27 years old when he made his first million. He has been involved with non-profits for a long time but is not sure if he feels comfortable in getting near the people who are involved.

Wing is heading to Mobile, Alabama and is wondering hoe he ever got himself into this. His first impression is like “where am I”, it doesn’t even look like a town, there is no main street. He has to survive on $36.67 and has found that he to sleep in a deep, dark and dirty place. On his second day, he decided to check out some local organizations. He heads first to Tri-Coastal Community Center that is founded by Caroline Thompson; the people who come into the center were directly affected by the oil spill.

Wing meets Charles and Darlene; they are going to prepare some of the food boxes that go out to the families that are still affected by the 2010 oil spill. There are a thousand families that are in need every month; they get everything from diapers to blood pressure kits.

Wing meets James Morris next who is a crab fisherman, he tells Wing that he was doing better before but got an average amount today. Wing heads over to James place to help him make some crab traps.

Wing heads trough town to see if he can find another organization to help. He finds a homeless 15-Place shelter that is run by Ms. Lynn Walters. She shows off her laundry machines that are so used after three years because they are going non stop. She then introduces Wing to Michael, he shows the room the holds all the possessions of the homeless people. Michael tells him that he was homeless as well a year ago and now has his own place. Michael tells Wing that he even spent the night once in a portable toilet.

Wing decides to go out on the boat with James for the day to catch some crab. Wing learns that James makes a living off the sea and his production has gone down drastically from the oil spill. After fishing, Wing gets to meet Jame’s family and enjoy some fresh cooked crab. James’ wife says a lot of people don’t want to eat seafood now because they are afraid that it is tainted. Wing is so overwhelmed by the hospitality offered by so many people and have so little.

Wing is heading back to Tri-Coastal and he meets Rhonda is learning how to fix things in her home. She used to have a coffee shop, but tourism went down after the oil spill, she lost her business and home schools her children because she cannot afford the fees to put her children in public school.  Caroline tells Wing that she wants to build a warehouse where she can house the stuff to help families.

Next, Wing heads back the 15-Place shelter, he meets Patrick and Marjorie who are in the kitchen and preparing food. Patrick tells Wing that he lost his job and was sleeping outside and this place helped him to feel like a human being again. It’s time to serve and Wing is right up there serving to everyone.

Wing takes a break and sits with some of the people who visit the shelter for food. He hears various stories from people about how they ended up in the shelter. Wing thinks that these people make the best of the situation they are in.

Wing thinks there is not enough money in the world to make him feel as good as his experience with donating his time to help others.

Wing is trying to be really sensitive on how he is going to pass along his wealth to some very needy people. Wing first visits 15-Place Shelter and tells them that he is not out of work, he has a chain of restaurants and is a millionaire and wants to give them $50,000.00, the least he can do for them. Lynn is speechless, she gives Wing a big hug. Lynn says she is so happy that Wing has money, he doesn’t have to go to work now, he can stay with them and volunteer; she is overwhelmed with the gift. Wing takes Michael outside and gives him a new pickup truck.

Wing then goes to see James and tells him the story about his mother being helped out in China by a fisherman and Wing probably wouldn’t be here today if it weren’t for him. Wing tells the truth about who he is and gives James a cheque for $20,000.00.

The last stop for Wing is Tri-Coastal, he tells everyone that he knows they need to build a bigger facility. Then Wing tells the truth about who he is and gives them $80,000.00 to help build the new warehouse. Caroline is overwhelmed and thanks Wing while she cries.

Wing admits that he was a little scared about his being Asian and having a goatee but everyone made him feel welcome and one of their own.