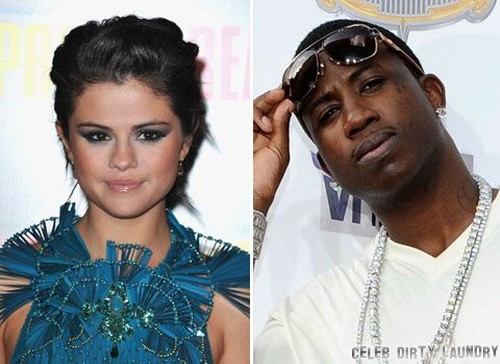 There’s something about this whole Selena Gomez and Gucci Mane business that just feels so dirty. Firstly, the thought that she was hooking up with this ice cream tattoo faced weirdo is just beyond me. It’s really beyond the scope of my imagination and I’m a writer.

Yes, we could see Selena being with someone like Justin Bieber, because he’s a total cake boy. She probably slapped him around and wore the pants despite being all sweet and nice in public. Now, to think that she was breathing the same air as this twatwaffle — let alone hooking up with him is beyond reproach. Selena, if this is what you’re stooping to, then girl you need help.

ANYHOOKER, apparently not only did Selena get it on with Gucci Mane, but she was also said to be getting gangbanged by his entire crew. I just can’t. UGH. MediaTakeOut reports that Waka Flocka and the entire Brick Squad ran a train on Selena.

Last week Gucci Man DROPPED Waka Flocka from his label – when he heard rumors that Waka had SMASHED actress Selena Gomez. And these rumors ain’t coming from just anybody. MediaTakeOut.com got its hands on TWEETS sent from BRICK SQUAD rapper/soldier Lil Skitzz. And according to Lil Skitzz not only did Waka SMASH . . . but he says that Brick SQUAD did a little CHOO CHOO with Justin’s ex.

So freaking gross….but we’re guessing that is one way to drop the “good girl” Disney image. What do you think?