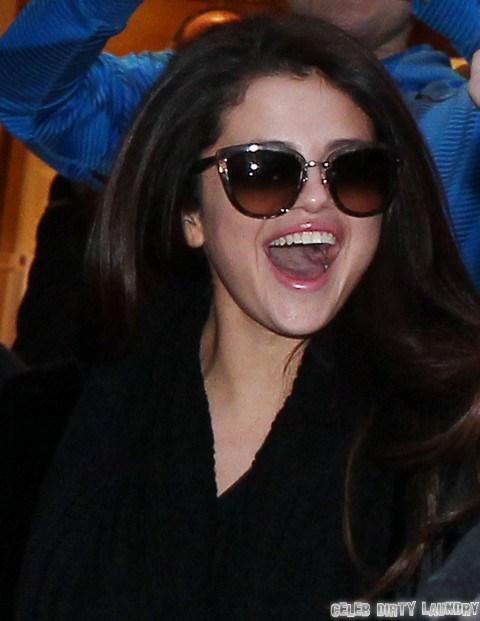 Selena Gomez touched down in Paris yesterday afternoon to promote her new movie Spring Breakers, and possibly reunite with Justin Bieber who just so happens to be touring in Ireland now and France in March. The former Disney starlet has been in an on-again-off-again relationship with the 18-year old who has pretty much given up on Gomez who wants to treat him more like his mother than his girlfriend.

Since their break-up last month, Justin has been seen smoking weed, lending his cars to his “friends” that constantly get pulled over by cops, he allegedly drank sizzurp – a strong drug with the ingredients of prescription cough syrup – and supposedly slept with a woman who he invited back to his hotel room after a wild night out with his boys. It looks like Gomez is starting to get jealous, knowing that Justin has made it perfectly clear he doesn’t care whether or not she’s with him, he’s still going to be himself.

Selena could potentially be meeting up with Justin in Paris as his European tour dates start tomorrow in Dublin and will later on move to France on March 19th. Let’s not forget that Dublin only happens to be a 60-minute flight from Paris, so these two could meet up whenever they wanted to thanks to Bieber’s private jet. Sources say that when the two are together, their chemistry is great, but as soon as Justin is surrounded by Lil’ Za, Lil’ Twist and his other new friends, he turns into a real arrogant little punk.

Twist supposedly hooked Bieber up with the girl he supposedly slept with in his Four Season hotel room last month. This almost feels like a Chris Brown/Rihanna type of relationship; the guy tends to mess up all the time while the girl just can’t help but keep running back to him because she simply doesn’t know any better. Only time can tell whether these two will meet up or not, but the chances of it happening are very high. Maybe then, Justin will get to ask Selena why she has been spending so much time with a boy named Luke Bracey whom she briefly dated, according to reports.

We can’t wait to see how this goes down.

Actresses Selena Gomez, Vanessa Hudgens, and Ashley Benson out shopping at “Le Printemps” in Paris, France on February 16th 2013. Then they had dinner at “L’Avenue” restaurant. The girls are promoting “Spring Breakers”