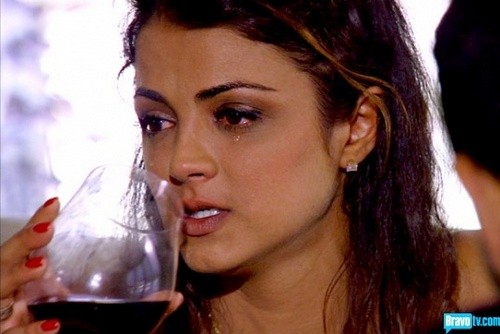 Season 3 of Bravo’s Shahs of Sunset has been one dramatic episode after another. And, the majority of the drama has been between Mercedes ‘MJ’ Javid and Golnesa ‘GG’ Gharachedaghi.

It all started when MJ took GG’s boyfriend Sean aside and told him that GG made out with another guy at a party. GG was not pleased that her best-friend spilled the beans about her cheating ways, and the pair have been bickering ever since.

During Shahs of Sunset most recent episode “Velvet Rage” their bickering escalated to a near physical altercation. GG may have a valid reason to be upset with MJ, but she probably should have addressed her when she was sober.

MJ took to Twitter to voice her feelings about the incident. She tweeted this message to GG: “I’m not saying don’t drink, I’m saying you’re a really bad drunk.” Then she added, “Homegirl f—ed up. If you love someone, dont make out with another guy in front of 120 people.”

This isn’t the first time GG has drank TOO much and embarrassed herself by causing a scene. When she gets drunk and vile Reza refers to Golnesa her as “Lochnessa.” Earlier this season her sister had to drag her out of a formal dinner (Mike’s brother’s graduation) because she was drunk and picking a fight with MJ, and people were starting to stare. Just last month TMZ posted a video of GG being dragged out of a night-club kicking and screaming because someone supposedly hit her sister. The ironic part is, her sister Leila didn’t seem too upset about the alleged assault. She was more concerned with getting her drunk sister home and out of public.

It’s pretty clear you have a drinking problem when your best-friends are slamming you on Twitter and calling you a “drunk.”