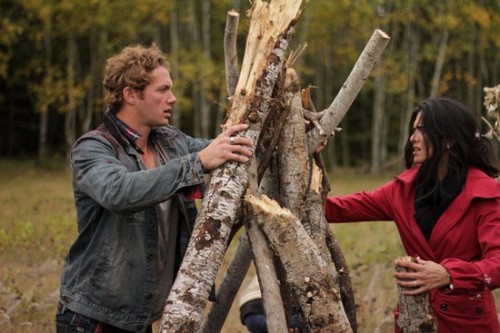 Tonight on NBC SIBERIA continues with a new episode called, “Out of the Frying Pan.”  On tonight’s show Sam finds and keeps Miljan’s century-old Russian diary and reads aloud about a violent tribe of “Valleymen” feared by the original settlers and who still may be stalking the Siberian contestants.  Did you watch last week’s episode?  We did and we recapped it for you, right here.

On tonight’s show the intensity of the contest heated up as real and surreal events created anxiety, mystery and jeopardy. Esther (Esther Anderson) proved her prowess as a strategic player while Carolina’s (Joyce Giraud) admission rocked them all. A major injury and a mysterious sighting in the woods created fear and panic, eventually sparking a manhunt for one of the group.

On tonight’s show When Johnny (Johnny Wactor), Joyce (Joyce Giraud) and Daniel (Daniel David Sutton) return with news of the bloody scene left behind at the abandoned producers’ basecamp, Esther (Esther Anderson) is the object of an angry verbal attack by all the others who now fear for their lives alone in the wilderness. Sam (Sam Dobbins) finds and keeps Miljan’s (Miljan Milosevic) century-old Russian diary and reads aloud about a violent tribe of “Valleymen” feared by the original settlers and who still may be stalking the Siberian contestants; and a mysterious radio tower beacon appears in the distance, promising hope of salvation.Also starring Jonathon Buckley (as the Host), Neeko O.J. Skervin, Irene Yee, Sabina Akhmedova and Natalie Ann Scheetz.

Tonight’s episode 6 of Siberia is going to be an exciting one that you won’t want to miss, so be sure to tune in for our live coverage of NBC’s Siberia at 10 PM EST! While you wait for our recap hit the comments and let us know what you think of Siberia season 1.

As we left them the disqualified contestants spilt up to try and find the camp of cameraman when all they see is abandon tents splattered with blood. What they do find is Sabina. The ghost she was following last episode led her to the land of red corn syrup.

They tried to use the radio in the office only for Sabina to say someone is blocking the signal. How is that obvious Sabina? Yeah she’s supposedly an Israeli soldier but what the difference to between signal and jammed signal. Till she explains that her fellow contestants needs to keep on her.

Back at camp Esther is still crowing about getting rid of so many people. That is until the other contestants come back. They’re cursing her out before someone gets them to explain the situation. They do but Neeko doesn’t believe them. He thinks they never crossed the line because the magic button worked before. Slowly Neeko comes around.

They call a meeting to discuss what they should do now. Sam begins making plans about how to prove they were deserted when they get sent gas masks by the production company. They weren’t as abandon as they thought. In probably the best acting he’s done so far, Johnny goes all Hulk on the message box. Once he and Sam flip it though they see a compartment on it. Of course the compartment would show that the box acted on its own to random deliver message. If it’s like it came out of “Doctor Who” who’s to say it wouldn’t work like it did.

Irene just wants to go home. No one can blame her. She can’t keep pretending her leg is injured forever. Technical in real life she could have been dead by now and so hard to remain her near dead person.

Miljan is creepy. After almost losing Irene he carved a tattoo in his leg in honor of her. Now with the rest of the group walking off and abandoning Irene, he thinks going into her cabin with only the two of them alone is a good idea. Is it that kind of that idea? Well, he does turn her camera off.

Miljan may be creepy but he could also be another “actor”. Sam found his little diary with Russian inside. What else is Russian? That stupid Jack-in –the –box machine. There were Russian inscription that said it was for a test subject.

The other people pull them apart and they look through his book. Miljan claims he found the diary in a mysterious box he’s never mentioned before. The diary isn’t all that interesting. It was old journal. Useless.

Whoever does the make-up did a great job on Irene’s leg. Only one discrepancy. The bar went through her leg and not merely scratched her. If they couldn’t pull off with special effects then don’t show the leg.

Everyone is at the stage of what next? They can’t start a fire that will bring all of the CGI ghosts to come after them so what can they do? Daniel has an idea. He spots a light tower. Some have to go and others have to stay with Irene. Miljan votes to stay with Irene. Luckily other people vote to stay with her as well.

Like Esther who finally got around to apologizing to Irene. The apology gets rejected.
Daniel, Johnny, and Sam are the only ones leaving. They say goodbye to everyone else. Some are pretty tearful and at the last minute they’re joined by Carolina/Joyce. They travel to where they saw the light and it appears to be a crash site. One that looks eerily like Miljan’s new tattoo.

Would Miljan blow up an airplane just so that Irene wouldn’t leave him?