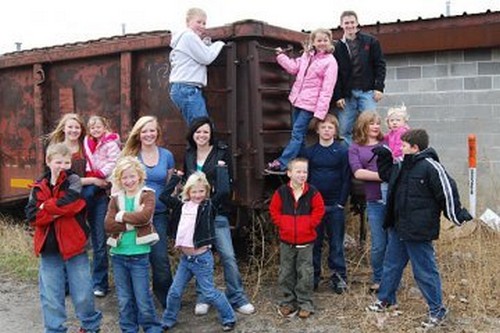 Tonight on TLC the Brown Family returns with a new episode of SISTER WIVES called, “Sister Wives On the Ropes.” On tonight’s show Kody receive some financial news that could affect Mariah’s college plans. Did you watch last week’s episode? We did and we recapped it here for you.

On last week’s episode in an attempt to move forward with their new life, the Brown’s celebrated by burning the bag Kody used daily to go between each house. Meanwhile, Janelle hit a plateau with her weight loss and Kody and Meri made a decision on Robyn’s surrogacy offer.

On tonight’s show tensions run high when the Browns must stand their ground at a debate with outspoken anti-polygamists with Christine’s estranged aunt as one of them. Later, Meri and Kody receive some financial news that could affect Mariah’s college plans.

We will be covering Sister Wives Season 4 Episode 9 tonight at 9 PM EST so don’t forget to come back to this site for our full and detailed recap.  Make sure to refresh often to get the most recent details.  While you wait for the recap, let us know how excited you are about the new season of Sister Wives.

On tonight episode the Brown family have voluntarily decided to join a panel. This way they hope they could shed some good light on the way they live through polygamy but on the side they will have former polygamist denounce that way of life. So everyone is on edge. It’s not as if they will be talking to people who honestly don’t know a thing about polygamy.

What makes matter even more difficult is that Christine knows one of the ex-polygamist. It’s her aunt. Christine’s family grew up in polygamy and married into polygamy. However her aunt left after 33 years of marriage. She never could understand why it was acceptable her husband was always “shopping” around. She’s now a firm believer in one husband and one wife. As a matter of fact she can remember when Christine first met Kody. At the time she wanted to kidnap her.
Right now she’s not nervous to see Christine. She’s missed her and just wants to give her a hug. They haven’t seen each other in 8 years. She’s joined by other former polygamist, mostly kids. One of the biggest critics of polygamist are from former polygamists.

The Brown family is worried and in order to elevate their fears they go see the moderator of the event. They wanted to know they’re not walking into an ambush. The moderator assures them that no that’s not what it’s about. He asked them to join the panel to show one of the families that is working so they could almost dissect why some polygamy doesn’t work and the others do. To the professor they’re an expert that came out with a positive result.

Christine though doesn’t want to see her aunt. Because the aunt is so vehement about everything in Christine’s life being wrong then she just doesn’t want to her. While her aunt claims she’s fine that Christine remains in her marriage as long as agrees that not all polygamous marriage are like her’s.

That’s what a lot of former polygamists kind of want to say. They feel and fear that people will look at the Brown family and think polygamous marriage are like that when they’re not. There are a lot of horror stories and they all don’t come from the FLDS.

Kody and Meri aren’t worried about the panel. Janelle feels like all the “blame” is going to be thrown on Kody anyway. It’s Robyn and Christine that are anxious. Robyn hates the idea of having to explain herself. Christine doesn’t like confrontation and she’s slowly shutting down.

At the event Christine went to use the bathroom but it was taking forever for her to come back. Robyn and Meri go in search for her and they see her aunt is one of the women waiting outside of the restrooms. Christine had heard her aunt and in order not to face a confrontation she was willing to hide in the bathroom. Meri and Robyn go in and they surround her as she leaves. The aunt doesn’t know what just happened but later a tearful Christine joins in with a family prayer.

Once the panel begins, Each Brown family member discuss their first experience with polygamy. Then former member tell their own stories. Vast contradictions but no one interrupt or gets upset until the audience riles everyone with their own questions.

The two sides of the panel stopped addressing the audience all together and started to talk / confront each other. Everyone got angry and in the end neither side came to an agreement that they each have a right to the way they live their life.

The Brown are feeling beaten down and that they essentially got nowhere but at least Christine was able to say goodbye to her aunt while both of them remaining cordial.