BY Cate Meighan on June 4, 2013 | Comments: 4 comments
Related : Reality TV, Recap, So You Think You Can Dance, Television 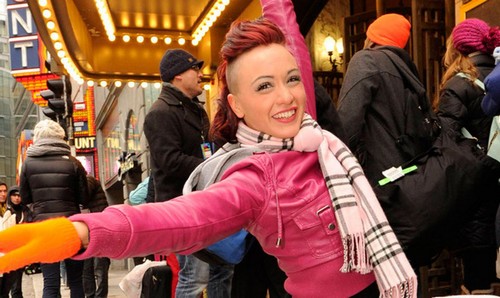 Tonight on FOX SO YOU THINK YOU CAN DANCE continues with a new episode. On tonight’s show it’s the last auditions before Vegas, and everyone wants one of the final golden tickets.  Did you watch last week’s show? We did and we recapped it HERE, for you!

On last week’s show joining Nigel and Mary at the judges’ table for this session is So You Think You Can Dance favorite Adam Shankman.  The standout performance of last week was Anthony Savoy his performance to Sara Bareilles’ “Gravity” had Nigel asking Adam if he’s heard him land yet. Mary also said she couldn’t hear a single foot drop while he was dancing. The judge bestowing the golden ticket to Vegas on the brilliant dancer.

On the Next Episode of SO YOU THINK YOU CAN DANCE… The search resumes tonight for America’s Favorite Dancer as SO YOU THINK YOU CAN DANCE heads to the next city! See what happens when the best dancers all compete for a ticket to Las Vegas. See who struts into the judges’ hearts and who trips up. This week’s episode will see the Judges joined by performing dynamo Wayne Brady as the audition tour heads to Memphis, Tennessee.

So You Think You Can Dance Season 10 Episode 5 airs tonight at 9PM and you don’t want to miss the Dancers trying to impress the judges with their moves and rigorous routines in order to survive the auditions and be invited to Las Vegas.  Celeb Dirty Laundry will be live blogging the show each week, so don’t forget to come back to this spot at 8PM EST for our live recap!

RECAP: So You Think You Can Dance hits up it’s last audition city tonight as we see the talent in Memphis. Up first to audition is a guy called BluPrint and he’s part of the infamous Dragon House crew that produced Cyrus last season. His ticks and animations are off the charts. It’s difficult to catch everything that he does. Wayne Brady is the guest judge and he thinks that BluPrint is an absolute artist. Straight to Vegas he goes

Curtis Holland appears to have been tapping his whole life. He clearly lives and breathes it and Wayne wants to take him home. Mary Murphy and Nigel Lythgoe think he is off to a great start and he’s off to choreography.

Tucker Knox was in a severe accident awhile back and after being run off the road his spine was broken. He is an amazing contemporary guy that is absolutely amazing. He says that he is much stronger after having to fight to come back and it’s obvious he belongs in Vegas.

Courtney Thurston’s father put her in dance to help her escape the negativity at home when she was very small. Her technique is pretty flawless. Dad on the other hand, is not. Or as Wayne called him “Chris not-so Brown”. Courtney however is headed to Vegas.

Shashan Rothlisberger is bringing a first to the show, she’s a cup dancer. She’s fluid and graceful and really brought a different culture to the stage. She gets into the choreography round. Nico Greetham is a name that you need to remember starting right now. This guy is just an amazeballs mix on contemporary, hip hop and a bit of animating thrown in for good measure. He’s going to Vegas and beyond for sure.

Elyse Felinger splits her time between dance and being a trapeze instructor. Her flow is beautiful and her landings are super quiet. She makes everything on stage look very easy and it gets her a ticket to Vegas.

Jenna Johnson holds 4 National Ballroom titles and is from Provo, Utah so you know she’ll be good. The judges say nothing, just hold up tickets to Vegas. Isabel Feiberger is a salsa dancer with terrific energy and a lot of cool tricks. She’s headed to the choreography round to prove herself further.

I absolutely love Caleb Brauner. He is the whole package. He has all of the technical stuff down but his personality and creativity are just crazy. This guy won’t just make top ten, he’ll be in the final four. Count on it.

Larry Booze has crazy feet that slide and glide across the floor better than anyone else I’ve ever seen. Wayne tells him he’s a born star. Nigel pushes him to choreography and hopes that he can prove himself.

Jasmine was one Cyrus’ other half. She tells Nigel that they dated until he did the show last year and the relationship fell apart. She performs to Destiny’s Child’s version of Amazing Grace and brought the song to life. She goes straight to Vegas. Paige Pellicano is a good dancer but it felt very “competition dancer”. She has the skills but it didn’t seem like she could connect with the audience so she was kicked over to choreography.

Next week we’ll be in Vegas for the next round of competition!