BY Cate Meighan on July 30, 2013 | Comments: one comment
Related : Reality TV, Recap, So You Think You Can Dance, Television 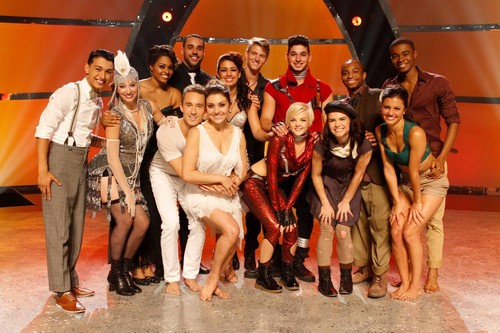 Tonight on FOX SO YOU THINK YOU CAN DANCE continues with a new episode. On tonight’s show the competition continues when the Top 14 finalists compete once again for America and the judges. Did you watch the last episode? We did and we recapped it HERE, for you!

On last week’s show the 16 remaining talented dancers tried to win America’s votes in their quest to become America’s Favorite Dancers and find out who makes the cut.  The two dancers eliminated were Mariah Spears and Dorian “BluPrint” Hector.

On tonight’s show the 14 talented dancers try to win America’s votes and hearts in their quest to become America’s Favorite Dancers. Watch to find out who makes the cut.  As always, the judges will make the final decision, but you still have the power to determine who will go on the chopping block next week as the bottom three guys and bottom three girls—so keep voting to save your favorites.

So You Think You Can Dance Season 11 Episode 12 airs tonight at 8PM and you don’t want to miss the reveal of the first live show of the season.  Celeb Dirty Laundry will be live blogging the show each week, so don’t forget to come back to this spot at 8PM EST for our live recap!

Sonya Tayeh is just amazing and her piece that opened SYTYCD is exactly what we’ve come to expect of her. After the performance the show begins with the news that Curtis is injured. He blew out his shoulder in practice but hopefully he’ll be okay next week. The judges are quickly introduced and Anna Kendrick is sitting in the celebrity seat tonight. We immediately recap last week’s show and find out who is in danger.

Alexis, Nico, Makenzie, Curtis, Alan and Jasmine are all in danger. Nigel decides to save Makenzie and so Alexis and Jasmine need to dance for their lives. Alexis does her thing first, tapping to Stand By Me. Jasmine does a sexy bluesy solo that will no doubt keep her in the competition. I predict Alexis will be leaving at the end of the show.

Jenna and Tucker are up first, busting out their best hip hop moves to Slight Work in a man vs. woman kind of thing. Nigel thought it was a bit unconvincing and forgettable. Mary said it wasn’t their strongest but they went after it. Anna thinks it wasn’t as hard as it was supposed to be, but still lovable.

Alexis Nico are up next with a contemporary routine that has to win the judges over or they’ll be going home tonight. It’s a Sonya Tayeh piece and Alexis’ character is madly in love with Nico’s and he has moved on. Just oh my wow.  Total standing ovation. This was raw and abrasive and Alexis was believable. Mary thought it was all just fearless and the little nuances were spectacular. Anna thinks they showed crazy range and complexity in the feelings of a split. Nigel loved the emotion between them.

Hayley is partnered with Curtis so she has someone standing in as she does a tango this week. Anna loves that Hayley is an emotional dancer  and is pretty sure that if she had Hayley’s body for one day she could do anything- like solve world hunger. Nigel thought it was stunning. And Mary thought she was perfect.

Makenzie and Paul have a sexy jazz piece by Sonya Tayeh- the choreographer of the night! This is typical Sonya in that I have no clue what’s going on but it was hot as hell. These two were fabulous and Nigel thinks they were both brilliant. Mary thinks they’ve yet to take a wrong step. Anna thought they were both so powerful that it makes Makenzie stand out tonight.

Amy and Fikshun pulled a Christopher Scott routine out of the hat this week. Their lyrical hip hop is set to Let’s Get It On. Amy is a waitress and Fikshun is her daily customer. Amy actually wiped out for a sec and saved it well. Anna thinks they are adorable and held each other up. Nigel thought they were tremendous but wants to watch them branch out.

Malece and Alan are dipping into a salsa and this should be good. She can do anything and Alan is a ballroom specialist. Of course it was. The energy was crazy and the lifts were nuts. Nigel thought it was really great and they both sold it. Mary thought it was spot on and Anna, like everyone else thinks Malece is like Tinkerbell.

Tonight there are two group numbers and each of the 14 contestants pulled a number. First up is a cool Broadway piece.  It’s set to Joe Cocker’s Come Together and everyone is dancing around and on a pool table.

Bonnie Story choreographed the second group piece which is a contemporary piece on the damage done by bullying. Mary thought it was tremendous and Anna thanks all of them for their amazingness. Nigel thinks the message was vital and it was well danced.

It’s time to announce who is going home Nigel immediately announces that Alexis and Curtis are going home. Tune in next week for more SYTYCD.