BY Cate Meighan on July 9, 2013 | Comments: 2 comments
Related : Reality TV, Recap, So You Think You Can Dance, Television 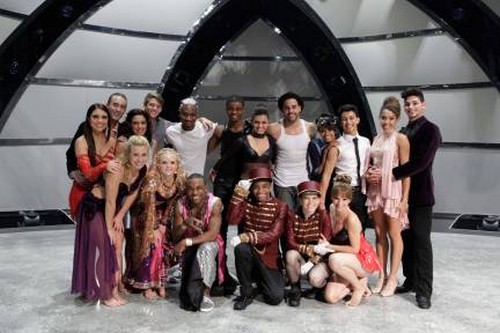 Tonight on FOX SO YOU THINK YOU CAN DANCE continues with a new episode. On tonight’s show the competition continues when the Top 18 finalists compete once again for America and the judges. Did you watch last week’s show? We did and we recapped it HERE, for you!

On last week’s show the top 20 awaited their destiny.  The 20 finalists performed for the nation again before learning which dancers would be ending their journeys.   Early on in the evening we found out the judges chose to save Mariah and Jade.  The first two dancers to be eliminated were Carlos and Brittany.

On tonight’s show world-renowned choreographer and two-time Emmy Award winner Paula Abdul will join Nigel Lythgoe, Mary Murphy and FOX Sports broadcaster Erin Andrews as a guest judge.  Paula will lend her expertise to critique and praise the dancers as they battle it out to remain in the competition.

So You Think You Can Dance Season 10 Episode 10 airs tonight at 8PM and you don’t want to miss the reveal of the first live show of the season.  Celeb Dirty Laundry will be live blogging the show each week, so don’t forget to come back to this spot at 8PM EST for our live recap!

Another fabulous group routine opens this weeks’ So You Think You Can Dance. Pretty Face was choreographed by Sonya Tayeh and Christopher Scott and featured the dancers performing ontop of a make shift volcano. We also learn right off the top that Jade is out of the competition because an old injury flared up. I wonder if this means that we’ll only lose one contestant tonight. As for the judging panel tonite we have Nigel Lythgoe, Mary Murphy and guest duties are shared between Paula Abdul and Erin Andrews.

We learn who is in the bottom right off the bat: Jade, Curtis Blue Print, Alexis, Jasmine Mason and Jenna are all at risk. The guys are all safe because Jade has left but the ladies must dance for their lives. Alexis cranks out a tap routine to Try A Little Tenderness. Jasmine performs a soulful contemporary piece to 10 Seconds and Jenna shows us why she’s a ballroom champ to Jessie J’s wild. We’ll learn who is leaving at the end of the night, I predict it’ll be Alexis.

Amy and FikShun are taking on a Paso to Tactical Dominance. It has a techno/Matrix feel and I’m super impressed by his intensity. They were both great but it seemed like more of a stretch for him. Mary thinks they were fabulous and Erin believes this couple has a target on their backs. Paula wishes she had Amy to choreograph years ago and she thinks FikShun has radically improved.  Nigel says the mark of great performers is that they command the stage even when not smiling which is what these two did.

Jasmine H. and Aaron picked Broadway out of the hat and it’s not going to be a natural fit for either. They Just Keep Moving the Line is really well done in spite of that. Aaron is a big guy that is probably the best partner onstage this year and Jasmine can pull off any genre. Erin thought it was a blast to watch and that they both translated Broadway beautifully. Paula tells Aaron he reminds her of a working dancer in the old MGM era and I think that is a pretty great definition. The whole panel can’t quite get enough of these two.

Mackenzie and Paul are doing a contemporary piece set to No Day But Today. Her character is supposed to be dying and they are dealing with it as a couple. The performance was stunning. Paula believed the piece and the characters that they were portraying. Nigel thinks Mackenzie is one of the best technical dancers on the stage. Mary is bawling so that’s always a good sign. And Erin thought it was simply fantastic.

Jasmine M. and Alan are doing a Sean Cheesmen jazz piece set to Charlotte Martin’s Veins. Finally something cool and quirky. They play a kind and queen having tea in the most unconventional way. Nigel enjoyed it and was amazed by Alan’s strength. Mary and Erin both loved the quirks and thought they could have even pushed it a bit more. Paula thought they played their characters brilliantly.

Jenna and Tucker perform another femme fatale routine this week, this time set to Michael Jackson’s Dangerous. This was just really cool as hell. There’s a movement for every beat and these two absolutely nailed it. Mary thinks Jenna can do no wrong and Erin loved Tucker’s ribcage and Michaelish moves. Paula thinks they both really moved extremely well together. This is by far my favorite so far tonight.

Malece and Jade worked with Sonya Tayeh  on a contemporary piece until he was injured. All star dancer Marco stood in so that Malese can still perform it tonight. I see Malese becoming Sonya’s next favorite muse. They receive a standing ovation. Erin has no words at first but then she finds them. She thought it was ridiculous in all the right ways. Paula believes Malese is maturing in front of our eyes and Nigel thinks that Marco brought something out in Malese that he has never seen and he loved it.

Hayley and Curtis get to do a samba that’s an 11 on the difficulty scale. Paula thinks Hayley brings fire to the stage and Curtis needs to partner a bit better. Nigel thinks Hayley dominated this routine when it should have been Curtis. Mary is a ballroom specialist and kind of rips Curtis a new one for lack of technique.

Alexis and Nico perform a jazz routine set to I Put a Spell On You and she is supposed to hypnotize Nico. She really did pull it off a lot better than many tap girls could. Nigel thought it was tight and well danced by both of them. Mary loved it and like Nigel doesn’t know how Alexis is in the bottom 3. Erin thinks they were very in sync and are a strong couple to deal with.

Mariah and Blu Print are the hip hop dream team this week. I’m sure we all hoped that they’d dance together at some point and to be handed hip hop was a crazy gift for this crumper and animator. Mary wanted more from Blu but the whole performance was just sick. Erin suggests that Luther the choreographer should come out with a new workout video because it would be a blast. She thought they were at home on their own turf tonight. Paula loved the energy and loves how great Blu is at all of the intricacies.

Now it’s time for someone to be cut from the competition. Jenna is safe, thank goodness. The choreographers feel that Jasmine has self doubt and Alexis forgets the pointers that she is given. Jasmine is sent home. Tune in next week for more So You Think You Can Dance.