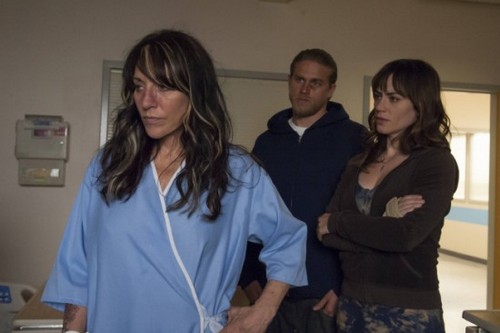 Tonight, FX’s dark-around-the-edges drama, SONS OF ANARCHY, returns with an all new episode entitled “Los Fantasmas.” During tonight’s episode, pressure mounts on Jax as the sins of his club and family pull him in different directions.  Did you watch last week’s episode?  We did and we have a full and detailed recap, right here for you.

On last week’s episode things were really starting to heat up – it wasnot going to be any easy task to make the Irish keep their end of the deal. Nero was still being pressured to testify against SAMCRO.  Taragot slapped by Gemma and the DA tried to pressure Tara to testify against the club.  Tara who was not pregnant – scammed everyone into thinking Gemma beat her and caused her to have a miscarriage.

On tonight’s show after Tara’s huge move last week it was clear that neither Unser nor Wendy new exactly how far she was willing to go.  Everyone this week is going to have to deal with the aftermath.  Jax is going to feel a lot of pressure on tonight’s show with Tara pulling him in one direction and club problems pulling him in another.  His problems with the Irish is far from over.

Tonight’s episode looks like it is going to be great and you won’t want to miss it, so be sure to tune in for our live coverage of FX’s Sons Of Anarchy season 6 episode 8 at 10 PM EST! While you wait for our recap hit the comments and let us know how excited you are about the return of Sons of Anarchy.

RECAP: Jax is at home with Tara who is lying down and recovering from her supposed miscarriage last week. Jax offers to take the boys to day camp so she can get her rest. Tara asks Jax what he is going to do about Gemma, he tells her not to worry about her, the restraining order will keep her away.

Gemma is at the station, she wants to know why she is still there. Gemma tells Roosevelt that an eyewitness saw her kick her pregnant daughter in the stomach, does it really matter what she says to him. Gemma tells him that Tara baited her, she did not touch her. Roosevelt asks if there where any eyewitnesses and she says two, Wendy and Margaret. Furthermore, Gemma doesn’t think Tara was ever pregnant, she thinks she did the whole thing so she could keep Gemma away from her grandchildren.

Jax is at the club with Chibs and he tells him that the shit that went down between Tara and his mom was crazy. Bobby throws the paper at Jax to read the paper, it reads that local gangs were tied to the shootings. Jax tells Chibs to get the club together.

The DA is talking to Nero, she tells him that they are going to pick up his crew on every tiny infraction. She then tells Nero’s lawyer that him giving up SAMCRO is going to be his only get our of jail free card.

Tara has a knock at the door, it is Unser. He tells her that he has been playing in his mind everything that happened the day before and doesn’t understand why he got her the restraining order before it all went down. Unser guesses that the miscarriage was a lie and can’t imagine why she would do it. Tara tells him that she knows it was brutal, but she wants her away from her children. Unser reminds her that Gemma is locked in a cell and has the weight of thinking she killed her own grandchild. Tara says that she did it for her kids, he tells her that he is upset with and it breaks his heart that she had to do something so wrong and think it was right. Unser leaves but first tells Tara that he can’t help her any more.

Jax tells the boys that the article in the paper is just a power play by the DA. Juice starts talking about Connor and tells him that he think he will be on board because he knows they saved him. Jax tells the guys that he appreciates the concern for his family and he loves them all for it.

Unser is with Roosevelt and tells him that he will be downstairs if Gemma needs a ride. Roosevelt is surprised that Unser thinks he is going to let her loose.

Jax already sees vice watching him and his crew, all the crews need to keep things tight so there is no trouble. The car that Jax thought was vice, runs over one of the guys he was with and Chibs tells him they got this, they will clean the body up and Jax should go home with his body.

Gemma is out of the station, Unser has her in the car with him. She tells him that she wants to know the truth and she promises that she won’t turn on him. Gemma says that Tara framed him for killing her unborn baby and she wasn’t pregnant. Unser tells her that her control over the boys is not what is best for those boys and is upset about what happened, but her love is so wrapped around secrets and hate that he doesn’t know if she can find it anymore. Gemma asks Unser if she is supposed to let go what Tara did to her, is that the payment for all the hate.

Chucky calls Jax and tells him that the DA is pressuring him to find out what happened to the body that got hit by the car.

Jax is home, Wendy drops by to check on Tara and he tells her not to come to his house again.

Nero calls in the DA and tells her that he is ready to give up the source of the KG-9. Nero asks her if she knows about his son and his condition, she says yes. Nero tells her that he wants the best care for him and wants him close by. Nero tells her that he bought the gun off the street, never seen the guy before. Matthew found the gun, he is responsible for the death of those children. Tara is looking for Jax, she stops by the shop and talks to Bobby. He asks her how she feels and she says a little sore. Bobby tells her that he doesn’t know what happened between she and Gemma, but if she needs anything. Tara asks Bobby if he thinks SAMCRO can ever be a legitimate business. Bobby says they will do what is best for the club and any direction than the one they have taken in the past few years is a good one.

Roosevelt gives the evidence to the DA, Nero did not kill the girl, Toric did. The DA tells Roosevelt that Nero admitted he bought the gun on the street. She tells him that she is working on a deal to give his son a better life, she thinks he is going to buy it. Roosevelt tells her that he cut Gemma loose, the facts did not add up, he felt is was the right thing to do.

Jax and the guys are with the guy whose friend got hit by the car, they find the guy that did it and it turns out that it is the young boys father who got killed with the KG-9. Everyone leaves and the guy is alone, the cops arrive and just before they do, the guy stabs himself in the neck. The DA arrives and she is surprised that the boys father is dead.

Gemma arrives home, Wendy is there and she wants to talk. Wendy tells Gemma to do whatever she wants to do. Gemma wants to know what Tara promised her. Gemma asks if it was her idea or Tara’s. Gemma then says that Jax is going to realize one day what Tara did and when he does what side of the fence does Wendy want to be on. Wendy says that she will lose either way. Gemma doesn’t think so, she tells Wendy to put herself on the right side and if she does, she’ll make sure that Jax doesn’t kill her. Wendy goes into her purse and takes out a gun, tells Gemma that she should take it. Gemma kisses Wendy on the cheek and tells her that she is going to have to get rid of it on her own to prove that she can be a good mommy.

Jax is with Chibs, they go to see Chucky and he tells them the shit is on the DA because she leaked the story.

Jax heads to the hospital, he sees Gemma there and he asks what she is doing there. Gemma says that she had to see him, she did not hurt Tara and did not cause the miscarriage. Jax calls Gemma a mean twisted bitch, then says let it eat through her brain that she will never see her grandchildren again, she is dead to them.

Wendy is shooting herself up with something in the arm, then we see the DA back at the station and throws an envelope at Nero. She tells him that Toric killed the girl. The envelope has pictures of children that were killed and tells him to think about them, then she lets him loose.

Tara tucks her children in with Jax for the night. Jax asks her if she ever regrets it, coming back. Tara says that a lot of things she did differently and now, he makes it all worth it. Jax says that sometimes he thinks he should have come back five years sooner or five years later, he is lost and trying to put it back together; although he doesn’t know if he can. Jax tells her that he feels so far away from her now and he knows it is his fault. Jax begs Tara to let him back in.