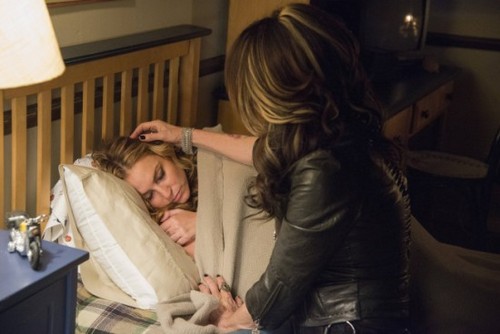 Tonight, FX’s dark-around-the-edges drama, SONS OF ANARCHY, returns with an all new episode entitled “Huang Wu.” During tonight’s episode, Jax looks to push the club forward but the Irish put another obstacle in his way.  Did you watch last week’s episode?  We did and we have a full and detailed recap, right here for you.

On last week’s episode Jax’s life was turned sideways.  Jax found out about Tara’s betrayal: her fake pregnancy, fake miscarriage, divorce and how she set Gemma up.  Tara said a lot of things to Nero last week about Gemma and Jax’s father.  Nero confronted Gemma and she came clean.  She told him she did not kill John but she gave Clay permission to do it.  At the end of last week’s show we saw Tara sitting on a chair with a gun.  At this point she does not know what Jax is going to do.

On tonight’s show we are down to the last five episodes and things are really heating up on SOA.  Jax is still trying to move SAMCRO into a legitimate business and there always seems to be obstacles in his way.  Galen is going to want the club to break Clay out of jail.  Add to all this Jax promised to deliver Galen to the DA and I don’t think that is going to be easy.

There are so many questions to answer before the season ends.  Will the Sons break Clay out?  Will Jax handle the situation with Tara rationally or will he let his temper get the better of him?  What will Nero do with what Gemma told him?

Tonight’s episode looks like it is going to be great and you won’t want to miss it, so be sure to tune in for our live coverage of FX’s Sons Of Anarchy season 6 episode 10 at 10 PM EST! While you wait for our recap hit the comments and let us know how excited you are about the return of Sons of Anarchy.

RECAP: Tara is in bed asleep, she wakes up and panics to find the children. Jax is with the two boys and tells Tara not to try and take the kids anywhere because she will be watched and he needs to put distance between them or somebody is going to be hurt.

Chibs sees Gemma and blows a kiss to her. Nero is back working and happy to be free. We see Jax on his motorcycle driving. Clay is still in a strait jacket and his face bloodied, Wendy is still high. We see Jax keeping an eye on Tara. Tara doesn’t look that happy about what she did after all. We now see Jax going into a church and just sitting there watching two altar boys having fun goofing around.

Clay is back in his cell, he is being carted off to county tomorrow, he tells his Irish informant to tell Galen to get a message to Jax.

Jax stops to see Nero and finds out that the escort business is back up and all good. Jax announces that he is going to crash there for a few nights, Collette tells him to leave his things in her office. Gemma arrives with the rest of the crew, she tells them that Clay has summoned her. Jax wants to know what is going on with the Irish, Chibs says Galen is in town and wants to meet with them. Jax has something to tell everyone, he taked to Lowen last night and got some truth, Tara was never pregnant and set up Gemma. She wanted Gemma to never have custody of the children, she was going to divorce Jax and take the children. Jax then apologizes to Nero and Gemma. He then tells the guys he has Tara being watched, he needs a couple of days. Bobby wants to have a familiar face watch Tara, keep her motivated to stay in town; Juice offers to watch Tara. Jax tells Gemma to be careful with Clay, she tells him to be careful with the butcher of Belfast. Gemma sees Collete flirting with Jax, she asks Nero whats all that about and Nero says jokingly that maybe he has mommy issues.

Jax goes to see Galen and is looking for SAMCRO’s help as Clay’s trial has been pushed up.

Tara notices that she is being followed by Juice as she arrives at Wendy’s place. Tara tells Wendy that she knows she told Gemma everything; she looks around the apartment and can’t believe that Wendy is obviously high by all the stuff that is on the table. Tara goes on to say that Jax knows everything and Gemma will now get custody of her boys if she goes to jail. She asks Wendy what she was thinking. Wendy tells Tara to come clean and speak to Gemma and Jax, tell them the real reason she did what she did and stop lying. Wendy says she is sorry, Tara tells her she is a coward and that is why she cannot be a mother, futhermore she is a stupid weak junky.

Juice is outside and ready to follow Tara, she gets in her car and backs up, almost running him over – but ruining his bike instead.

Jax, the guys and the Irish meet with Connor Malone. Galen shows them some guns, shoots some rounds and then some Chinese guys show up. Galen shoots the Chinese, killing one of them. Galen tells Jimmy it is a strong message, to teach Connor that he is the only source for guns in Northern California. Jax claims that he had no idea that Galen was going to shoot the two guys. A deal is made, but Jax tells Galen that he doesn’t like the complication of killing the guy. Galen leaves, then Jax tells Jimmy this is exactly why he wants out of this business.

Wendy called Unser and told him Tara went over and is unglued, he tells Gemma and Nero about it. Gemma tells Unser to go see Wendy, Nero offers to go with him.

Gemma stops by at Tara’s house to get some things of the boys, she finds Tara there. Tara tells Gemma that the reason she hates what she did so much is because she would have done the same thing to protect her family. Gemma says faking the death of a baby isn’t something she would have done. Tara tells her to get out. Gemma says Tara’s bridges are all burning and betrayal is unforgivable, there is no coming back from that for Jax. Gemma goes on to say that Tara should just say she is sorry and go away; the children will not be raided by Tara and his her choice if they tell the children, mommy moved away or mommy passed away. Gemma leaves and Tara is clearly shaken.

Chibs tells Jax that they couldn’t connect with the Chinese. The DA gets a call, it is Jax and he tells her thank you for the licence. He then tells her that he is going to give her Galen in the next 48 hours and she needs to have a lot of man power. Bobby asks Jax if he thinks the DA will take the bait, he says it depends on what it is.

Jax and the boys take off, they are all being followed by the Chinese.

On the highway, the Chinese open the side of their van door and start shooting at the boys. They head to an industrial area where there are tons of containers and Jax forces through a wired fence to get away, but is thrown off his bike. The guys all stop, the Chinese get out of their vehicles, they tell Jax that since they are getting out of the business, they want it. The Chinese want to take over the guns in Northern California and even the score with Galen. Jax tells them that Galen has a shipment coming in the next day and he will tell them when and where. The Chinese keep one of Jax’s men for security, just to make sure he doesn’t back out of the deal.

Juice is still following Tara, she asks him where Jax is and calls him an asshole. Juice tells her that Jax is with Collette and can give her the address if she wants.

Nero and Unser are at Wendy’s apartment, they find something burning on the stove and Wendy passed out on the floor. They drag her out of the house and take her outside, looks like she is going to be alright.

Gemma is at the prison to see Clay, he tells her that had his lawyer drew up a letter of intent, to give her his assets. He says that when he drops out he won’t be able to file for divorce, so this way she gets everything.

Jax and the guys arrive at Diosa to chill.

Gemma arrives at Wendy’s place, she gets her ready to leave.

Tara drops by Diosa to see Collette. When nobody is looking, Tara goes up the stairs and walks into the room where Collette is having sex with Jax. Tara hits Collette, knocks her to the floor; in defense, Jax hits Tara.

Tara runs outside, Jax runs after her. Tara has a gun and asks Jax what is happening to her. Tara gets in the car and drives away.

We now see Jax with his two boys, then we see Tara still sitting in her car with her gun.

Wendy is at Gemma’s house being taken care of.

We see Clay laying down in his prison bed, then Jax kissing his children goodnight. Jax then sits in his bedroom and sits on the bed to think. At Diosa, Collette has a nice mark on her face.

Tara goes to see the DA, she tells her she is not ok and she is ready to talk. Tara then says she wants her deal. The DA asks her if she is in danger. Tara says she wants her kids in witness protection, the DA says that the deal is no longer on the table and she can’t offer the deal at this time because there are other things pending. The DA says that if Tara fears for the safety of herself and her boys, she can help. Tara gets up to leave and says that nobody can help her.