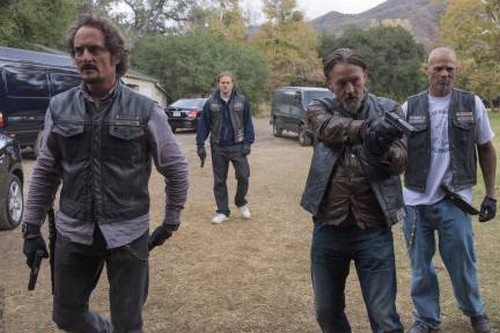 Tonight, FX’s dark-around-the-edges drama, SONS OF ANARCHY, returns with an all new episode entitled “You Are My Sunshine.” During tonight’s episode, as the dust beings to settle Jax’s world is suddenly turned upside down.  Did you watch the last episode before the break?  We did and we have a full and detailed recap, right here for you.

On last week’s episode it looked like all hell was  going to break loose.  We knew that Jax had wanted to put SAMCO into a more legitimate business and last week it looked like he puts his plan in action.  Jax promised the DA to deliver Galen in 48hrs and you just know that is not going to happen easily as a matter of fact it did but it was a dead body.  Add to all this he and the club broke Clay out of prison. and Jax killed him  Meanwhile Tara rand to the DA and wanted to rat out Jax and the sons.

On tonight’s show and the penultimate episode all lies and secrets are starting to come out.  The sons will have to deal with the aftermath of last week’s shootings.  District Attorney Tyne Patterson is determined to pin it all on the Sons.  Tara is in a panic and she could try to take off with the boys.  At this point it is looking like she may betray Jax one last time and rat him and the sons out to the DA.

Tonight’s episode looks like it is going to be great and you won’t want to miss it, so be sure to tune in for our live coverage of FX’s Sons Of Anarchy season 6 episode 11 at 10 PM EST! While you wait for our recap hit the comments and let us know how excited you are about the return of Sons of Anarchy.

RECAP: Jax is with the DA and apologizes to her that she lost a man, but it would have been more if he didn’t do everything he did to make it right. Jax says he delivered everything he promised, he held up his half of the deal. The DA calls him a smart man, then says that they have to finish their investigation at which time she will let him know if he did keep his end of the deal. Jax goes back to his men and tells them the DA knows she has been played, but they need to wait to see how it all works out.

Tara is with Bobby, she gets a call from the DA who tells her that they will give her everything she and her family needs but they want her to go to their office and bring the evidence. Tara agrees to meet, but says it will have to be at her office because she still has an escort. Bobby wakes up, he thanks her for saving him.

Unser walks in at Gemma’s place, she is making scrambled eggs for the kids who want their mommy.

Jax asks Connor how things are going, he says find so far but he is worried about the Chinese.  Jax meets with the Chinese and takes responsibility for what happened to Galen, tells him it couldn’t be helped. The Chinese want to see the guns and Galen’s men. Jax tells him that with Galen dead, the Irish are hurt. The Chinese want Connor and Jax tells him no but this will mean the Chinese don’t let go of Jax man. Jax knows he needs to reach out to August Marcs.

Nero is getting a lot of flack from his crew, they don’t like that Nero is with SAMCRO and they believe the club only brings problems.

Wendy is talking to Gemma who asks her if the kids have spoken to her, she says no, they just miss their mom. Wendy goes on to say that the nausea is bad, she can’t keep anything down. Gemma asks if she wants Wayne to pick up her stuff, she says yes. Then, Wendy thanks her for all her help but tells her that she hopes it is not a power play against Tara. Gemma denies wanting to hurt Tara but the fact is Tara could be going to jail and Gemma will need help with the children, which is where Wendy fits in.

Tara announces that she needs supplies, Juice gets up and goes to see Bobby who is awake and smoking a cigarette. Juice asks Bobby why he changed his mind and voted yes this time regarding Clay, Bobby says because this time it made sense. Bobby tells Juice to go to Diosa and get some head, he is making everyone nervous, especially him.

Nero goes to meet with the Mayans who want to speak to him. They are worried that SAMCRO is getting out of guns, Mayans say it is problem and now they are going to have to meet with the Chinese.

Jax tells Connor that two of his guys were taken out, he is furious. Jax says this is why they need August Marcs, then they will have an option to present to Roarke. Connor finally gives in, Jax says that he will set it up.

Tara shows up at her office and is surprised to see Gemma who says that she wanted to be at the scene of the crime. Tara then tells Gemma she needs to get her things and she can wait outside. As Gemma is heading out, she bumps into the DA and they have words. Gemma heads into the chapel, the DA heads to Tara’s office. The DA has all the documents to protect Tara and the kids, she has the evidence but won’t give it up unless the documents are sent to her lawyer. Tara agrees to meet the DA later with the kids.

Jax is with the boys hanging out when Tara walks in, then heads to the bedroom. Jax follows her to the bedroom and tells her Bobby looks better. Jax goes to leave the room and Tara runs to hug him, he hugs her back and she says she is sorry.

Juice is at Diosa, he gets into a room and undresses waiting for a girl to meet him when he starts to have pain in his chest and falls to the floor. He scrambles to find some pills that he stole off Bobby’s table that Tara had left for him. Meanwhile, Tara finishes taking care of Bobby then says that she is going to bed, but sneaks out the window and heads into her car where she gets a call from the DA and confirms she will be there at six.

Jax goes to see Connor when he thinks August Marcs has just shown up but it is not, the vans that role in are the Chinese and they want vengeance. Connor thinks he is going down, but in fact Jax and his men kill all the Chinese.  Connor is furious, he can’t believe that Jax took such a risk, he could have been killed from the Chinese. Jax tells him to calm down, they need to wait because August Marcs is on her way.

Niro is with Gemma when one of the girls runs downstairs and screams that there is something wrong with Juice. They find oxycotton and turns out that Juice took eight of them. Gemma and Niro run in to help him and get him to throw the pills up to save his life.

August has shown up, he says he is sorry it was a bloody day but he had to do it. August says he will do four times the business that Jax did and he wants Connor to speak to the Kings. Connor is surprised that he is going to leave the cash there, August says that he has to trust his new partner.

Niro and Gemma are at the bar, he tells her that eight pills is someone who did not want to wake up.

Tara calls Gemma, she tells her that she needs help with Bobby because he is bleeding again. Gemma leaves to help her and Niro stays back to take care of Juice. Juice tells Nero that Jax made him kill the mother and then he collapses to the floor; Nero is shocked and lets him fall.

Unser is with the boys when Tara shows up and asks for Gemma. Tara takes the two children, she tells Unser that she is going to get dinner. Unser wants to go with her and she says she is going alone and he needs to move. Wendy is there, she asks Tara what she is doing; all of a sudden Tara pulls a gun on the two. Unser asks her how far does she thinks she is going to get, he then figures out that she made a deal. Tara is leaving with the children and Wendy starts to scream that she is Abel’s real mother, Tara hits her.

Gemma gets a call on her cell phone, she slams on the brakes and turns the car around.

Connor gets a call from the Kings, they are willing to give Marcs a try; they will see how the first shipment goes. Connor and his men leave.

Jax gets a call, it is Gemma. Meanwhile, Nero gets a message that Gemma wants him to meet her at the house with Jax, it is important. Tara is in the car with the two children, she is telling them she loves them and what she does is for them. Tara starts singing “you are my sunshine” to the kids and Abel asks if daddy is going to be where they are going. The DA is waiting for Tara, but the janitor arrives first and she is disappointed. Meanwhile, Tara heads to a hotel with the kids.

Jax arrives home to find nobody there and the place cleaned out. Gemma arrives, he tells her that Tara is gone and took his sons. Gemma says that she saw the DA at the clinic, she must have made a deal.

Tara is still in the hotel room, she is lying on the bed with the kids.

Niro arrives at Jax’s house and finds out what Tara did. Nero walks over to Jax and is cleary struggling with his feelings about what Jax made Juice do and his wanting to comfort Jax.