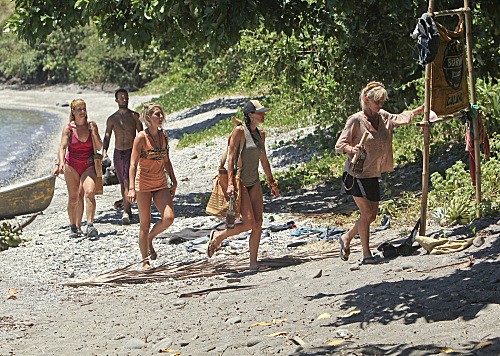 Tonight on CBS their Emmy Award-winning series SURVIVOR continues with another new episode called, “One-Man Wrecking Ball.” On tonight’s show one castaway falls victim to a strategic blindside and the Coconut Bandit returns. Did you watch last week’s episode? We did and if you want to catch up we have a full and detailed recap, right here.

On last week’s show one castaway sacrificed their own life in the game for a loved one. Meanwhile, this season of blindsides continues at a wild, unpredictable tribal council.  At tribal council Laura M was voted out and she said she was shocked by the blindside as she arrives at Redemption.

On tonight’s show castaways find out if water could be thicker than blood as new tribes are drawn. Meanwhile, one castaway falls victim to a strategic blindside and the Coconut Bandit returns.

At Galang the gang traipses back after their first tribal council and ask Laura B what she thinks about it. She says it was brutal and she’s glad she survived. Aras says Laura M looked him in the eye and was angry when she was voted out. Tina worries that Laura M will take them to task at Redemption tomorrow. Aras worries because he feels like he now has a ringleader target on him and needs to tread lightly.

Gervase and Tyson talk about axing Aras at some point if he gets out of hand even though they like him. Tyson says it’s tricky because people like him but if they lose the next challenge Tyson wants to cut him loose. Gervase wants to get rid of Aras before the merge because his brother is still active on the other tribe. Gervase says he thinks he and Tyson are the power couple out here. HA!

At Redemption, it’s Laura M, Brad and John. Jeff asks Ciera what she thinks about her mom being on Redemption. She’s teary and said she had a bad feeling all day. Jeff offers Ciera the opportunity to swap with her mom, but Laura M shuts it down and says no way.

The three have to race across a balance beam and pick up tiles that they have to lay out 1-100. At least it’s not a puzzle! The three line up for the challenge. They must stay on the beam and untie the bags one at a time. Laura is in first place and John is close behind. John is struggling – he’s fallen twice and is starting to panic.

Laura is still in the lead and Ciera cheers her mom on. She is on her last bag of pieces and Brad is in second. John and Brad are now neck and neck. Laura is well ahead of both of the guys and finishes in a clear first. Brad and John are close. John takes second and Brad loses. He hugs John and gives him a kiss on the cheek (weird…)!

Jeff asks Brad how the NFL compares to the competition on Survivor. He says he was better equipped to compete in pro football and tells Monica to kick butt now that she’s on her own. Brad rips his buff in half and tosses it in the fire. Monica calls out that she loves him.

Laura M gets to give a clue to the immunity idol. She opts to give it to Vytas. Jeff asks why not Ciera and she says she doesn’t want to put a target on their back. Jeff tells them he has one more piece of business and says they’re going to switch things up…

Jeff tells them to drop their buffs and they’re going to draw for new tribes. He hands them scrolls with buffs hidden in them. They reveal and find Aras, Gervase and Tyson go to Tadhana and Katy and Vydas move to Galang. Ciera is now the only woman on Tadhana. Katy is excited to be playing with her mom. Vytas is the only man on the other tribe and says he fancies himself a ladies man and that’s okay with him.

Gervase and Tyson tell Tadhana that their beach is way cooler than theirs was. Caleb worries about how much info will they give up and how much should they give up on their activities. Gervase goes fishing for gossip and they serve up a bunch of it. They also reveal the clues they read about the immunity idol. Hayden complains that the big guys are going through their cupboards and taking their stuff. Hayden wants to smack their hands and tell them to find their own food.

Tyson starts sneaking food and says he’ll keep doing it as long as he can. He also says he’ll do the minimum work he can to not appear to be the lazy guy. #CoconutBandit strikes again!

At Galang they make introductions and swap hugs. Tina is thrilled to have her daughter Katy playing with her. Vytas isn’t happy about the change up but there’s not much he can do. Kat is annoyed because Monica won’t give strategizing a rest for a minute and thinks she just needs to shut it and chill.

Tyson is making Aras look like a bossy jerk to get them to put him on the chopping block. He’s making cracks and also making it look like Aras is the one in charge. Tyson is playing really dirty but Aras doesn’t seem to notice he’s being set up!

At Galang they say a prayer and eat. Vytas says he is at the mercy of the women because he has no play since they’ve all bonded. He says he doesn’t know a lot about women but he’s going to open up and get vulnerable to try and get them to sympathize. He tells them about his time in jail and his drug addiction. Laura B is immediately suckered in. He whines about his relationship problems with his brother and talks up his brother and they immediately encourage him not to feel bad about himself.

At the immunity challenge, the new tribes are ready to rumble. They have to dive down to release a cage that looses fish traps. Four of these must be retrieved to get puzzle pieces. The reward is a picnic with lunch meat, cheese, bread, watermelon, chips and brownies. Yum!

The teams face off. Two swimmers for each team head out. The men are easily ahead of the women. The ladies forgot the fish trap! The ladies head back to get the trap they missed and the guys head out for their second trap putting the mostly female team far, far behind. Uh-oh!

Ciera drags the men down a little but they have such a head start it shouldn’t matter. The men are started on their puzzle before the women get back with their fourth trap. The women are working on their puzzle and the men are having problems.

Aras and Tyson erupt into debate and the women catch up! The women think they have it but they have a piece off and have to rearrange. They think they have it and cheer again but Jeff says they don’t. Their two screw ups allow the men to finish their puzzle and win the challenge.

At Galang the ladies (and Vytas) are dispirited. Vytas is very upset at Tina and Laura for blowing round one. Tina immediately apologizes and says she understands if they vote for her tonight and also that she feels bad for whoever gets voted off (if it’s not her). She thanks them all for their mercy and grace. He says if they want him to go home, there’s nothing he can do about it. Kat says they were going to take out Vytas but now she thinks they should kick Monica for her nonstop talking.

Kat finds Tina alone and says she thinks they should consider Monica. Tina says if they get over there and it’s all guys at the merger that could be trouble. Tina says everyone else should know that Kat isn’t being loyal to the plan. Tina runs to Monica and tells her that Kat wanted her out – she says it in front of Vytas.

Monica says they can’t trust Kat breaking the alliance and goes to confront Kat about it. She asks Kat and she boldfaced lied. Monica says that “people” have told her that Kat is bringing her name out. Kat says she wants to stick with all girls. She lies, lies, lies. Monica hugs her but then says it’s do unto others before they do unto you. Monica asks Vytas to vote against Kat and he agrees. She also tells Tina to do the same but Tina wants to stick with the plan to keep the girls but now doubts Kat’s loyalty. She sys it’s 50/50 at this point.

Jeff asks Kat how it’s going and she says that Monica seems down. Monica says she’s seeing trust issues from Kat and that it’s hard. Kat says it shouldn’t be about her and Monica. Vytas says Kat is likely going to write his name down but says you always have to stick with your alliance. Kat goes on the defensive and pleads with Monica. She says she wants to trust Kat but she’s heard she can’t trust her. Kat begs the group to let her stay and that the women should stick together.

Vytas says he hasn’t violated their trust and that if they can’t trust her now, they can’t trust her when the tribes merge. Jeff asks Tina what she thinks. She says she has to play a little differently now that her daughter is playing with her. Jeff gives Kat one last chance to speak and she says she loves them and has their back. Vytas says she’s talking like someone with their back against the wall and that she’s made mistakes. Vytas says they’ll be stronger with him.

The cotes are: Vytas, Kat, Kat, Kat, Kat and it’s Kat who is out of there for breaking trust and Vytas lives to fight alongside the ladies for another day! Jeff snuffs her torch and sends her to Redemption where I’m certain she won’t survive a single challenge… This is her death march. Jeff tells the others that if they don’t have trust now they need to earn it quickly.