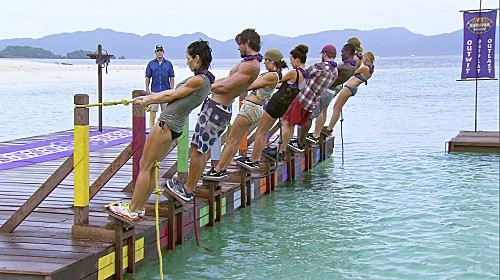 Tonight on CBS their Emmy Award-winning series SURVIVOR continues with another new episode called, “Big Bad Wolf.” On tonight’s show immunity means much more than a sumptuous feast. Did you watch last week’s episode? We did and if you want to catch up we have a full and detailed recap, right here.

On last week’s show it was double the drama as castaways endured two tribal councils in one episode. Meanwhile, castaways wondered if Vytas would exact revenge for his brother’s blindside and one castaway attempted to change history in a challenge that’s tough to swallow.

On tonight’s show an emotional loss on Redemption Island produces this season’s first jury member. Also, castaways find out if blood really is thicker than water at a tearful tribal council, and a castaway’s generous offer proves immunity means much more than a sumptuous feast.

The tribe heads back to camp after tribal and look at the heat lightning. Katie is sad that her mom was voted off. She says the core seven are so entangled that she’s doomed unless she finds a way in. Ciera and Laura quickly figure out that they are a huge target because they are the last pair of loved ones left together.

Laura tells her daughter they are a power duo. Ciera says they need to let Tyson be the strategy heavy and stay off the radar. She says that she’s got more strategy skills than her mom because she’s been at more tribal councils. Laura is ready to trust Ciera and follow her lead. Ciera wonders how long her mom will keep listening, but is ready to cut her loose to win the game.

It’s time for the Redemption duel. It’s Aras vs Vytas vs Tina! They each get a hook to grab a bag that contains a ball and the ball is used to solve a table maze. We’ve seen this challenge before. The loser goes and the winner gets to hand out a clue to the immunity idol. Jeff asks Tina if she would swap with her daughter and she says no way.

Tina is at the last spot and almost lands it when it falls. Ooooh. Rotten luck. Vytas is now the contender and lands it and wins the duel! Now it’s Tina vs Aras. Tina is close to the center again, then in the center and just needs to get it into the ident. She is soooo close. Tina lands it and Aras is out of Survivor for good after 25 days.

The brothers hug it out and Aras wishes his brother luck. Jeff asks Aras if playing the game has worked out any of their issues and Vytas says he thinks they can be more healthy moving forward. Aras says things are getting better and better and playing Survivor has made it better. He says he’s happy for Vytas and that getting closer to his brother is worth more than $1 million.

Aras hugs his brother and Tina and tells the others there are no hard feelings – he says they just outplayed him. He drops his buff in the urn and heads off to be the first member of the jury. Vytas decided to give Katie the immunity idol clue and she decides to keep it rather than tossing it in the fire. Tina and Vytas head back to Redemption Island.

Katie says her biggest concern is finding the idol so she can stay in the game. She says she won’t go down without a fight. The tribe trudges back to Kasama and discuss how they felt to see Aras go. Katie says she’s proud of how well her mom did against the two brothers. They tell Katie to read her clue and she pulls it out. She reads the very detailed poem and heads out to search.

Laura says they should hide all the tools she could use to dig. The plot on how to stop her. They know they can’t take it from her but they discuss digging alongside to try and beat her to it. Tyson plots how to make best use of this development since he’s sitting on the idol.

Tyson, Caleb and Hayden want to vote for Laura before she gets any further. Tyson wants to break up the power pair and then get Ciera on their side. Hayden thinks it’s a big move to get rid of Laura but he’s ready to make it and trusts Tyson. They agree they have to fight hard at the immunity challenge to make sure Laura doesn’t get individual immunity.

Tyson peels off his shirt and says – you’re welcome ladies. His skinny butt is so funny! Ciera pulls her mom aside for a heart to heart to tell her she may have to cut her loose. She tears up at the prospect. Ciera explains to her mom that if Katie wins or finds immunity that the plan is to take out Monica and that knocks them down to seven.

Ciera says it’s not realistic for she and her mom to get into the final three together and that she can’t wait to make a move. Laura thinks Ciera’s approach to her is courageous. She tears up and says her daughter is growing into a woman she’s proud of. She says she sees how strong Ciera has grown as an individual player. She says it hurts as a player, but she’s proud as a mom. They swap I love you’s and hug it out.

Katie wakes and heads out at first light to search for the idol. She says the seven will start infighting soon and she’s hoping to have immunity from the idol or challenge to protect her. Laura worries about Katie besting her and she heads out to tail Katie as she searches for the idol. They start digging together. Laura is digging in the wrong places intentionally.

The guys discuss that Katie and Laura are on the idol hunt. Tyson says he’s the #bigbadwolf because he’s plotting and has the idol and no one knows. Tyson pulls Ciera aside and tells her that Hayden and Caleb are going to vote Laura out. He says he’s not. She doesn’t know what to do at this point – she thought that would come later.

It’s time for the immunity challenge and Jeff take the necklace back from Katie. They will be on a small platform leaning out over the water hanging onto a knotted rope. They’ll gradually have to move down the rope. The last one hanging in gets immunity and a hamburger, hotdog, French fries and soda feast! They survivors get a good grip and it’s on.

Hayden is struggling right away. Jeff comments that they are all tired and hungry. Hayden can’t hang on any longer and is the first one out of the challenge. Caleb is the next to fall. Now they all have to move down to the next knot. Laura is struggling as is Katie. Monica is in the zone as is Tyson. Gervase falls in the water and Ciera goes right behind him.

Katie is out and it’s down to Monica, Laura and Tyson. Laura falls and Tyson is struggling. Monica seems perfectly in control. Monica begins to struggle and Tyson is in trouble too. He falls and Monica wins her second individual immunity in the game. Jeff puts the necklace on her and she says it feels really good. Jeff shows Monica her feast and tells her she can invite one person to join her.

Monica wants to give all the food to the tribe and have none for herself because she’s happy with immunity. She says they are her family. Jeff asks Caleb if it’s a political move or a gesture of good faith. Caleb says he thinks it’s part of her mom attitude. Jeff allows her gesture to go forward and the other survivors come over and stuff their faces.

The survivors come back to camp and tell Monica how awesome she is. They all thank her. The gang finds a snake in the shelter. Ciera is worried about her mom getting voted out tonight. Ciera pulls Katie aside and they pinky swear their conversation will be in confidence. Ciera tells her that the guys want to vote for her mom. Katie lies and says she found the idol. Ciera tells her that she has it. Katie believes the lie and admits she was fibbing. Ciera is amazed at how quickly Katie bought the lie.

Hayden is sure Katie doesn’t have it so he’s happy to vote for her. Caleb is too. Ciera is worried that she’s sticking her neck out too soon, but she thinks she’s making a safe move. Tyson says that Ciera has outfoxed him by going to Katie and flushing out the truth of the idol. But Tyson still wants to vote Laura. He goes to Monica and she agrees. He goes to Gervase and says Laura. Caleb want Katie to go next and thinks she’s too dangerous to allow to the end.

At Tribal Council, Jeff brings in the first jury member Aras who looks showered and well fed. Jeff asks Katie if she still feels like it’s her next. Jeff asks what if Katie has the idol. Caleb says there are a bunch of maybes you have to plan around. Jeff asks Tyson about the remaining mother daughter pair and he admits it’s a concern.

Caleb says Laura and Ciera have a different dynamic than Katie and Tina because Laura is more intense and wants to win as much as Ciera. Laura says they need to think hard about sending a loved one to the jury so they can start lobbying for votes for their loved one that’s still in the game and that they’ll have longer to do it.

Caleb says it’s hard because it’s four girls, four guys and four from each original tribe so it could go either way. They prepare to vote. Katie and Laura both look very nervous as Jeff goes to tally the votes. He’s back and asks if anyone has the idol. No one moves. He reads the votes – Laura, Katie, Laura, Laura, Laura and Laura. Ciera tear up. She hugs her mom. Laura tells her she loves her and that it’s okay.

Jeff snuffs her torch and sends her off to Redemption. Jeff tells them there are no loved ones paired up and it’s down to seven individuals in a contest with one winner. At Redemption, Laura says it sucks that her daughter wrote her name down but says she’s going to fight hard at Redemption and to help Ciera win the game.