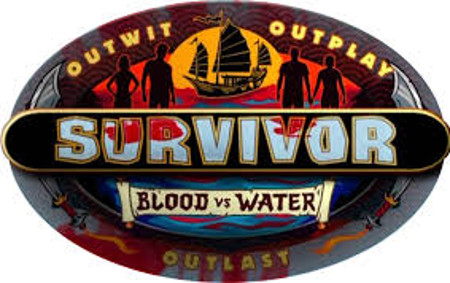 Survivor season 27 has finished filming in Cagayan, Philippines. The Survivor: Blood vs. Water cast will indeed be pairing up family members and loved ones to compete for the $1 million dollar grand prize. The show, sure to be filled with immeasurable amounts of drama, premieres tonight — Wednesday, September 18 on CBS. Make sure to head here for the live recap of tonight’s episode!

The new castmembers are as follows: Aras and Vytas Baskauskas; Candice and John from previous seasons; Colton Cumbie and Caleb Bankston; Gervase and Marissa Peterson; Kat Edorsson and Big Brother 12 winner, Hayden Moss; Laura Morett and Ciera Eastin; Monica and Brad Culpepper; Rupert and Laura Boneham; Tina Wesson and Katie Collins; and Tyson Apostol and Rachel Foulger. According to sources, “The couples will begin the game the night before day one with a new twist called “Day Zero.” As EW explains, “The 10 pairs will be sent out at sunset to 10 different locations to live by themselves for the night. They will then all meet up to be officially welcomed by host Jeff Probst and start the game the next morning.”

Redemption Island Returns…With a Twist: For the first time ever, the game will not be 39 days long but rather 39.5 days. The first impressions are always key in a game like Survivor, and that will prove true here as, just moments after meeting each other, each team will vote one member off their tribe. They will later be informed that these people have not been voted out of the game but rather sent to Redemption Island, which makes its return after having been absent for the past three seasons. There, they will battle to stay alive and reenter the game at a later point.

We have all been waiting for the return of Survivor to see who will OUTWIT, OUTPLAY, OUTLAST and, ultimately, be crowned Sole Survivor. The cast will be split into two teams, with returning players on one side, and relatives on the other. Who doesn’t love a good family war?

Will these returnees use their prior experience in the game to help their partners or will they leave their relatives alone to fend for themselves? Who has an early favorite for Survivor: Blood vs. Water? The show premieres tonight so hedge your bets now!