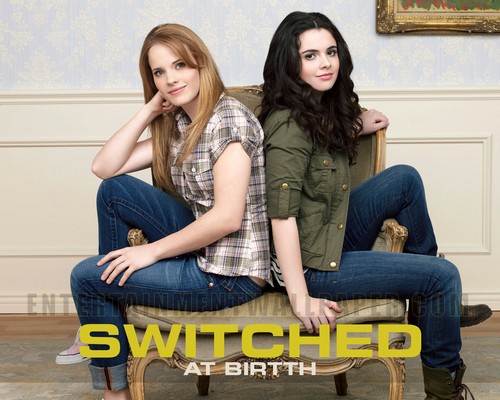 SWITCHED AT BIRTH returns to the ABC Family tonight with a new episode called, “The Good Samaritan.” On tonight’s show Angelo is frustrated by Regina and Bay’s messiness, while Adrianna’s frequent visits has Kathryn on edge. Did you watch last week’s episode? If you missed it we have a full and detailed recap here for you enjoyment.

On last week’s Bay began to reconnect with Ty, but then learned shocking news about his experiences in Afghanistan; Toby and Travis both sought managerial position at John’s car wash; Kathryn and Daphne had to adjust to Bay’s request to stay with Regina.

On tonight’s show the demands of an “adult” life start taking their toll on Toby and Nikki’s relationship. When she sees that Toby is overwhelmed by the demands of work and planning a wedding on a budget, Bay looks to lighten the mood and books his band to perform at the local carnival. Angelo is frustrated by Regina and Bay’s messiness, while Adrianna’s frequent visits has Kathryn on edge.  Meanwhile, Jace introduces Daphne to geocaching.

Angelo isn’t used to Regina and Bae’s sloppy take on life (dirty dishes and horrible eating patterns) but he hasn’t given up on them just yet. He offers to make them dinner later tonight.

Toby is selling his some of his equipment. The wedding is getting expensive. Bae wants to know why he doesn’t just ask for their parent’s help and Toby tells her that his fiancée realty wants them to do it on their own. Meanwhile Bae’s relationship with Daphne isn’t getting better. According to Toby it’s gotten worse since Bae moved to Angelo’s.

Daphne catches up with somewhat offbeat barista from the other day. She sees that he’s doing Geocaching. Apparently it’s a new thing. Nicki later tells her more about and how it’s really fun.

Katherine is having some trouble keeping her mom out of Toby’s wedding. She tries to get some support from John but his new senator duties doesn’t allow him any time to be a supportive husband.

John has to support a bill on abstinence. Just one problem: Daphne thinks teaching abstinence only is just mistake that will lead to more mistakes. Nicki supports the bill so John’s advisor asks her to come along.

Daphne is still upset that John basically ignored what she believed to be valid points. Regina warns her that they and the Kennishes come from different point of views. One of the reasons why Regina doesn’t want to move back yet is because they also come from different incomes. She won’t feel right until she gets a new job. She lost the last one by drinking. Daphne wants her to go back to the old job and try to explain but Regina refuses.

Bae goes to Emmett for help with Toby. She doesn’t believe Toby should marry Nicki. At first she thought her parents would stop it and when they didn’t happen she got fearful the wedding could happen. When she tells Emmett about Toby selling off his things; Emmett tells her how they didn’t have anything booked in the past month. Nicki may have been weaning Toby off his music.

Bae does her best to stop this when she books the band a gig at her job.

Katherine finally has someone to spend time with. Too bad its Regina’s mom. The grandmother has a lot of free time and only wants to give it someone. Katherine doesn’t want to hurt her so she’s instead with long winded stories.

Someone could use some guidance from the granny is Regina. Her uncleanliness reaches a breaking point. At least as far as Angela considers it. After finding a roach, he snaps at Regina so she storms off.

Katherine does snapping of her own as well. Regina’s mom is too much in her pace leaving Katherine no choice but to say she wants time for herself. Like mother like daughter. Even though grandma wasn’t as dramatic she does leave the room.

Daphne and her new “friend” are hitting it off. His sign language is getting better. Daphne decides to try geocache and after her first success she asks him to go with her. He agree but he also makes it clear he’s taking a break from dating this summer.

Bae tells Toby about the gig and he’s excited. Nicki, not so much. They were supposed to have had a counseling session. Bae pushes on though and Toby manages to talk Nicki into rescheduling.

Later Bae confronts her mom on why she hasn’t stopped the wedding yet. Katherine tells her that they trying to stop the marriage will only push him into wanting to do it sooner. Anyway she’s afraid to ask Toby to choose. She’s not sure he wouldn’t Nicki.

Daphne went to Regina’s former employer to ask for a second chance for her mom. The lady although polite says no. Daphne is helping her mom to look through jobs, there doesn’t seem to be anything available. Regina is ready to bit the bullet and ask for her old job back when Daphne confesses she already tried. Regina begins to get mad when Daphne returns that anger. She’s pushing her mom to get job in order for her mom to move back in with her instead of living with Bae.

Bae gets the gig to go onstage. They had started later than they were supposed to so Nicki wants to leave after one set. Toby asks her why they can’t do an encore when she takes his insistence to stay and not respecting her faith. She walks off but Toby and Emmett continue to play.

Regina does go to her former employer. This time to apologize before she asking for a job again. She offers to work for free on a trial basis just so she could prove herself. Regina gets two weeks.

Bae tries to talk to Toby afterwards but he doesn’t want to hear it. What happens between him and Nicki is between them and no one else.

Daphne is out geocaching. She’s with barista boy and he notices that she’s taking this game a little bit too serious. As per usual its Daphne’s way to throw herself into something in order to not confront a problem. She’s about to open up to him when she suddenly kisses and then flees.

Katherine apologizes to Regina’s mom. Grandma is sorry too because she knew she was getting on Katherine’s nerves but wanted to feel useful. The two agree to a joint project to make themselves feel better.

Bae is sullen when she returns to Angelo’s apartment. Angels express his disappointment that they finally have the chance to be the family they were supposed to be and this isn’t how he pictured. Regina tells him this is reality and exactly how it would have been.

Bae returns to the house needing to talk. She ends up talking to Daphne. They restart their friendship when Daphne tells Bae how she kissed the barista and Bae is able to her the guy is British.

What will happen between Nicki and Toby? Will they get married? Is what Katherine’s mom saying true? Did he only cleave onto Nicki because his mom was unapproachable?