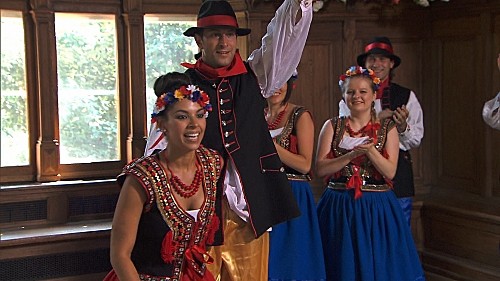 Tonight on CBC their Emmy award winning show THE AMAZING RACE continues with a new episode.  On tonight’s episode called “Get Our Groove On”  a double U-turn jeopardizes each team’s chances in the Race.  Did you watch last week’s episode 5?  If you want to know what happened, we have a full and detailed recap, right here for you.

On last week’s show teams traveled to Svolvaer, Norway where Racers plunged into the Arctic. Also, Tim and Marie faced a tough decision when confronted about the Express Pass.  At the end of the show Brandon & Adam arrived at the Pit Stop and were in first place, they won $5,000.00 each; the other news is, the race was still on.

On tonight’s show teams travel to Gdansk, Poland where racers struggle to keep up the beat during a polka challenge. Meanwhile, a double U-turn jeopardizes each team’s chances in the Race.

RECAP: Brandon & Adam are so excited to continue on the race. Jason & Amy now find out that they are still racing and have to head to Gdansk, Poland and find Solidarity Square for their next clue; caution U-Turn ahead. Brandon & Amy think it sucks that all the other teams will now have a chance to catch up with them during the boat trip and flight to Poland.

Nicky & Kim are the last team to arrive, but find out they are still racing and have a chance to catch up with the others.

Teams land and get into taxis, all are now heading to Solidarity Square; there is no doubt that the U-Turn is going to be used. Teams must now head to the Golden Gate, the historic entrance to old town Gdansk.

Tim & Danny are the first team to arrive at the Golden Gate. It is a Detour, teams have to choose between “Pose” and “Polka”. In Pose, teams have to pose to copy the statue of Neptune and collect a certain amount of money from people who pass by. In Polka teams have to learn the dance the Polka to the satisfaction of their instructor.

Tim & Danny arrive for the Polka dancing and Danny has to dress as a girl. Nicky & Kim decide to pose. Tim & Danny are hilarious and unfortunately, they are not getting it. Jason & Amy are also at the Polka with Nicole & Travis.

Brandon & Adam decide to pose, Nicky & Kim are done and have to head in costume, to Medieval Harbour Crane.

The three couples that were lost have finally gotten on the right track and are now headed to the Golden Gate.

Jason & Amy have finished their Polka while Tim & Danny are losing hope.  Nicole & Travis are done the Polka, so are Tim & Danny. Leo & Jamal have just arrive to do the Polka.

Tim & Marie head to pose while Nicky & Kim are very close to the Crane.

Jason & Amy arrive first at the Crane and decide not to U-Turn anybody; they are now headed to Falowiec, to the longest building in Poland.

Tim & Marie arrive at Falowiec, it’s a Roadblock, “who has a sweet tooth” and can be penalized for bad behavior. Jason & Amy arrive as well and realize that Tim & Marie used their Express Pass as they are not in costume.

The girls head into the buildings to try and find the right donut maker with the right flavor.

Nicole & Travis have arrived at the Falowiec, Tim & Danny as well.

Another team is U-Turned, Brandon & Adam.

Travis is the first one to find the correct donut.

Teams must now find Phil at the longest pier in Europe, Sopot.

Meanwhile, Leo & Jamal are still posing. Danny has found the correct donut, Kim as well. Brandon & Adam have just found out that they were U-Turned and have to head back and do the other Detour.

Three teams are on their way to find Phil; the first team to arrive is Tim & Marie and they win a trip for two to Hawaii. Jason & Amy are team number two, Nicole & Travis are team number three.

Leo & Jamal are now headed to find the donut, since they have to complete the two Detours. Brandon & Adam have finally finished posing, but now have to head the Crane where they will find out that they have been U-Turned.

Brandon & Adam completed both Detours and have been eliminated from the race, they have gone from first place to last place.