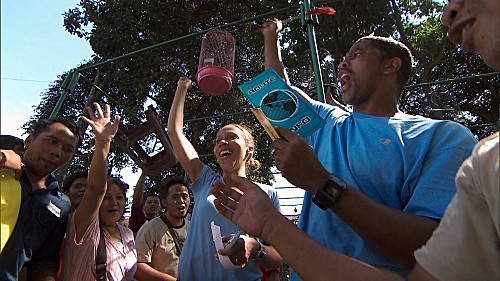 Tonight on CBC their Emmy award winning show THE AMAZING RACE continues with a new episode.  On tonight’s episode called “Part Like The Red Sea” the final five teams race through Bandung, Indonesia.  Did you watch last week’s episode 8?  If you want to know what happened, we have a full and detailed recap, right here for you.

On last week’s show the race continues in Al Ain.  Teams escape the desert heat in the United Arab Emirates with a rip-roaring white water rafting ride, plus the second double U-turn of the season occurred.  At the end of the episode Nicky & Kim arrived in last place and are eliminated from the race.

On tonight’s episode mistakes abound as the pressure of the Race gets to the final five teams in Bandung, Indonesia, and one team’s relationship turns icy when they struggle at a Detour.

RECAP: The ninth leg around the world begins and Nicole & Travis are the first ones to depart and travel 4000 miles to Bandung, Indonesia to find the Ram Arena. Leo & Jamal confront Nicole & Travis about U-Turning them, but nothing comes of it. All teams are now on the plane together, they all arrive in Indonesia at the same time. Teams are in cabs and traffic is a mess. Nicole & Travis are still in first place. Teams must now take two Head-Butting Rams to a west Japanese festival and when the rams to butt heads, they put them back in the same trucks and they will get their next clue.

Nicole & Travis are quickly finished and now must head to the Bandung train station. Tim & Marie finish the task quickly but have car trouble and end up being pushed to last place, with Jason & Amy just in front of them; but they have both missed the train that the other four teams are on.

Leo & Jamal feed their elephant and are just behind Nicole & Travis. It’s a RoadBlock, teams must assemble an angklung. Nicole & Travis are their first and thrilled that they don’t see anyone else there yet. Meanwhile, Jason & Amy have arrived at the market with Tim & Marie just behind them. Nicole has not yet assembled the instrument when Leo & Jamal walk in. Jason & Amy are in third place, they have fed the elephants and are on their way.

Nicole makes a first attempt at the instrument and fails, Leo as well. Nicole has already made two attempts now and still fails, but Leo wins. Jamal screams out to Leo and tells him to destroy his instrument, while Nicole runs around him and tries to see it. Leo & Jamal call Nicole a liar for resorting to dirty game play. Once this RoadBlock is completed, teams have to head to the Bosscha Observatory which is the next Pit Stop. Tim is done as well as Leo; both teams are headed to the Pit Stop. Meanwhile, Travis is frustrated because Nicole still cannot figure out how to assemble the angklung.

Ally & Ashley are the last team to arrive at the Pit Stop and have been eliminated from the race.