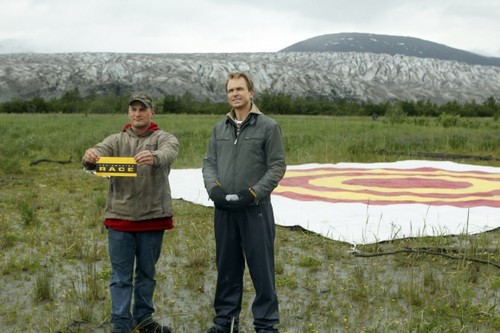 Tonight on CBC their Emmy award winning show THE AMAZING RACE continues with the season 23 Finale.  On tonight’s episode called “Amazing ‘Crazy’ Race” the race ends in Alaska and the winner is revealed.  Did you watch last week’s episode 9?  If you want to know what happened, we have a full and detailed recap, right here for you.

On last week’s show the final four teams were in Indonesia where they had to stomach a serving of snake, and Racers reached their boiling point during a challenging Road Block.  At the end of the show Leo & Jamal arrived at the Pit Stop in last place but quickly found out that it was a non-elimination race, they were both still in it for another leg and the finale.

On tonight’s show the final four teams race through Tokyo where one pair are eliminated.  Then the final three Teams will sprint to the finish line in Alaska for the one million dollar prize, on the two-hour season finale.

Leo & Jamal are the first team at the temple. It’s a Detour where teams have to choose from “Knock It Down” where they have to participate in a Japanese game show of human bowling where both team mates are the ball or “Call It Up” where teams have to immerse themselves in a phone booth full of water and goldfish are listen to a message, then repeat it to get their next clue.

Leo & Jamal decide to be human bowling balls and soon find it that it is not as easy as they thought. Meanwhile, Amy is immersed in the phone booth and it doesn’t take long for her to hear the message.

Leo & Jamal hit a strike and get their next clue, they must head to a Japanese fountain; they are in first place.  Jason & Amy, Nicole & Travis are also headed to the fountain while Tim & Marie have opted to do the human bowling.

After arriving last in the previous leg, Leo & Jamal must complete a Speed Bump; this requires the two to dress up in uniforms and along with other zoo keepers they must contain a fake rhino.

Nicole & Travis arrive at the the fountain, it’s a Road Block where they must build a robot in “Pipe Up”. Teams are given a very small sample of the robot and then must take some life tubes to replicate the design.

Leo & Jamal quickly finish their Speed Bump and start making their own robot while they call Nicole and Amy “dumb and dumber” because they are helping each other. Tim & Marie arrive at the RoadBlock and realize that they are last.

Leo finished the robot first, but one piece was wrong and needs to figure out what which one it is. Marie also has hers wrong and then it starts to fall apart. Amy and Nicole are not faring any better, they try again, but no luck. Marie is the first person done, she and Tim get their next clue, they must find a roaming vending machine. Jason & Amy are the next team to finish, they should technically stay to help Nicole & Travis because they helped them; Amy helps a bit and Jason gets ticked off.

Tim & Marie find the roaming vending machine and find their next clue, they now have to head to a shrine and the last person to arrive will be eliminated.

Jason & Amy are in the cab, he is still upset and tells Amy they lost 7 to 8 minutes because she helps Nicole & Travis.

Tim & Marie are the first team to arrive at the Pit Stop, they are one of the teams that will be running to the finish line for the million dollar prize; they have also won a trip for two to Aruba.

Jason & Amy got their clue and are heading to the Pit Stop. Nicole finished the robot and both she and Travis are heading to finding the vending machine while he berates her the whole time in the cab for taking so long.

Tim & Marie are the first team to depart to their final destination, Juneau, Alaska. Now it is everyone for themselves, nobody is helping each other any more. At the airport, all teams get their tickets and each are confident that they are going to win. All teams land and get in taxis to head to the marina and find the marked boats. All boats are in the water and not that far from each other. Teams arrive on a small island and find the clue to a RoadBlock; teams must do a supply drop in a plane. All three girls have chosen to do it, they have have to fly over a target and drop a package that lands in the target. All three women fail at the first attempt. Amy does it on her second attempt, she is the first one to do it and get their next clue; they must participate in an ice expedition. Meanwhile, Nicole and Marie both fail on their fourth attempts.

Marie finally hits her mark, she and Tim are on their way to the Ice Expedition. Sadly, Nicole has yet to hit her mark after 15 attempts.

Jason & Amy have passed from one glacier to the other and are now heading inside an ice tunnel.  Nicole is finally done, she hit the bullseye; both she and Travis are headed to the Ice Expedition and he is not impressed.

Jason & Amy arrive at a big ice wall and must now dig to find their next clue; everyone that they find says try again. Tim & Marie have caught up with Jason & Amy who just got their next clue, they must now head down the glacier and into a kayak.

Nicole is having a hard time travelling from one glacier to another, most likely because Travis won’t shut up. Nicole actually drops one of her pics and falls.

Tim & Marie finally chipped away at their clue while Jason & Amy are getting in the kayak and heading out to find their next clue that they will find at the marked island. Tim & Marie are now in their kayak but their arguing is getting the best of them.

Jason & Amy find the marked island and get their next clue, they must take a helicopter ride back to Juneau and make their way to Blueberry Hills Trailhead. Jason & Amy get their clue, they must build a wall of totem poles of currency names from all the countries in order that they visited. Tim & Marie have caught up, Nicole & Travis are heading inside the helicopter and on their way back to Juneau.

Jason & Amy are done and have to head to end of north Douglas Highway where they will find the end of this race. Tim & Marie are finished as well, while Nicole & Travis are arguing and still trying to put their totem poles together.

Jason & Amy are the first team to arrive at the finish line, they are the winners. Amy is in disbelief, Jason says that he was determined to meet every goal with her and they did it.

Tim & Marie are the second team to arrive at the finish line. Nicole & Travis arrive in last place.