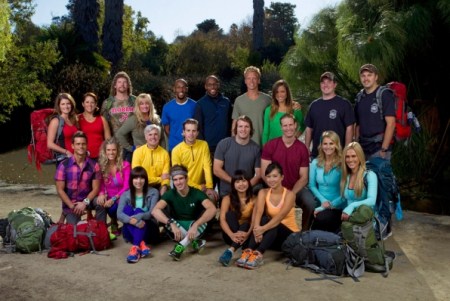 Emmy Award winning THE AMAZING RACE returns to CBS with it’s season premiere of its 22nd season. 11 new teams will embark on a sprint around the globe for $1 million dollars and Celeb Dirty Laundry will be there catching all the action for you!

This season teams will travel more than 30,000 miles, over five continents and through nine countries as they skydive from 10,000 feet in Bora Bora, participate in a Shemozzle race in New Zealand, hunt for scorpions with the Bushmen of Botswana and scale the treacherous north face of the Eiger Mountain in Switzerland.

They also will have a new twist thrown at them. While in the past the first team to arrive at the initial Pit Stop has earned an Express Pass that allows them to skip any task of their choosing, the team that arrives before all others at this season’s first Pit Stop will receive two Express Passes — one to keep for themselves and another one that must be given to another team of their choosing before the end of the fourth leg. It has the power of making one other team very happy, and several others unhappy over not receiving it.

On tonight’s show called, “Business in The Front, Party In The Back,” Teams arrive in paradise where they find themselves skydiving from 10,000 feet in Bora Bora, and in an AMAZING RACE first, three teams throw in the towel during the first sweltering Roadblock of the season, on the 22nd season premiere of The Amazing Race.

RECAP: The contestants are going to be heading to a tropical paradise that The Amazing Race has never traveled to before. Host, Phil, tells the contestants about the two Express Passes, then tells them to get into the waiting parked cars where they will find their first clue. The teams are heading to Bora Bora, two flights are leaving tonight and there are only room for five teams on the first flight.

At the airport, teams scramble to get to Air Tahiti. Chuck & Wynona are the first team to get tickets, Pam & Winnie are next, then the twins. Dave & Connor, Jessica & John also got on the first flight. All teams are making their way to the connecting city.

In Bora Bora, the first flight has landed and they must sign up for one of six helicopter rides, they must choose one team mate to jump out. John and Jamil will be on the first flight, as they made it to sign first. Connor and Wiinie jump, both seem fearless.

Teams must now travel by water taxi to Eden beach, Jessica & John are first and when they arrive at the beach they find out that they have to dig through sand castles to get their next clue, the worst part is the intense heat and they have to redo every castle the ruin. Meanwhile, the second plane has landed and those players are on their way to take their jumps out of the helicopters. Mona is the last one to jump.

Teams are having a hard time building the sand castles and it takes some time for them to realize that they have to wet the sand. Jessica & Connor are the first team to finish and receive their next clue; they must now attach a float to an outrigger canoe and paddle to the Pit Stop. The others teams are really getting sunburned and starting to suffer from exhaustion due to the extreme heat.

Bates & Anthony from the second plane arrive at the sand castles and four of the teams on the first plane are still there. Bates & Anthony are quick and find the clue right away, this only discourages the other teams.

Dave & Connor are team number three to arrive at the Pit Stop and think that they will be getting the Express Pass because of the alliance they made with the first five teams that were on the first flight.

Idries & Jamil have finally found their clue, I honestly never thought they would. Chuck

The last three teams are still at the sand castles and it had been over three hours. The teams are starting to think that they should take a penalty and just take their chances on moving ahead. The three teams take the penalty and it’s a race to to the Pit Stop for the tree teams; Matt & Daniel, Max & Katie and Caroline & Jennifer are all in the water and on their way to the Pit Stop. Matt & Daniel were confident that they would win, but their canoe overturns.

Matt & Daniel are the last team to arrive at the Pit Stop, they have been eliminated from the race and they doubt that they will ever live this one down that they were beat by two blond girls.