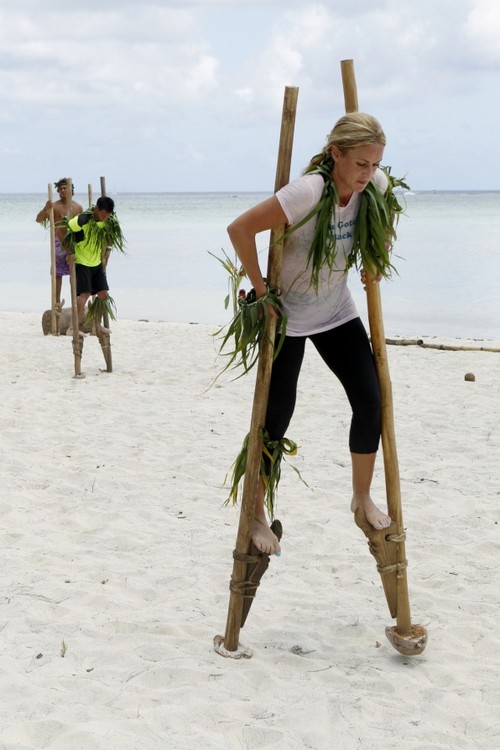 Emmy Award winning THE AMAZING RACE returns to CBS tonight with a new episode called, “Loose Lips Sink Ships.”  On tonight’s show the ten teams continue the race in Bora Bora and it looks like the heat starts to get to the teams tonight.  Did you watch last week’s premiere episode?  We did and we recapped it here for you.

On last week’s show we met the 11 teams that were competing for the $1 million this season.  This season there was a new twist, the first team to make it to the Pit Stop received two Express Passes — one to keep for themselves and another one to give to another team of their choosing before the end of the fourth leg.  Jessica & John were team number one and got the two express passes. Matt & Daniel were  the last team to arrive at the Pit Stop, they were eliminated from the race and they doubted that they will ever live this one down because they were beat by two blond girls.

On tonight’s show one team experiences extreme panic when faced with the seas of Bora Bora and another Team injures themselves sprinting to the mat.

Tonight’s The Amazing Race Season 22 episode 2 is going to be exciting, and you won’t want to miss. So be sure to tune in for our live coverage of The Amazing Race — tonight at 8 PM EST! While you wait for our recap, hit the comments and let us know how excited you are that The Amazing Race is back?  Also, check out the sneak peek of tonight’s episode below!

Teams are now travelling by speed boat to a chapel, Dave & Connor are the first team to arrive and get their next clue, it’s a Detour. Teams have to choose between Harvest Pearls or Take A Trunk. In Harvest Pearls, teams have to put on snorkel gear and dive to harvest a red pearl which is a top money earner for locals. Dave & Connor arrive first, but forget their snorkel gear and have to go back.

In Take A Trunk, teams dive deep to the ocean floor and find a treasure trunk that they have to drag to an umbrella under the water open the trunk, then take the items that are a table setting with chairs and set a picnic under water.

Joey & Meghan are doing well at trying to find a pearl, they realize that it is much easier to have one of them in the boat and one in the water.

Pam & Winnie are both afraid of the ocean, they both feel like they are going to be swallowed up whole. Dave & Connor have caught up, but Joey & Meghan are the first team to get both red pearls. Chuck & Wynona are doing their best. The next clue has the teams heading to a personal water craft (jet ski) where they have to use a map to head to the island of Motu Tapu. Idries & Jamil are still having a hard time finding their pearls, these guys are petrified of the water.

Caroline & Jennifer are in last place, but they are now an hour and a half behind, not four hours. Pam & Winnie are the only team left with the twins in the water and they have just found their second red pearl.

Max & Katie, Caroline & Jennifer have just arrived to Take A Trunk, the twins better get moving or they are going to be in last place.

Next stop is a Roadblock, teams have to walk on stilts and kick a ball. Chuck & Wynona have just arrived, but Dave & Connor, Jessica & John, Bates & Anthony are already there with other teams.

The twins are to be rescued by rescuers, it’s going from bad to worse for them in the water.

Joey & Meghan are team number four, Chuck & Wynona are team number five. Under water, Max is hyperventilating a bit, but he and Katie finish the Take A Trunk before Caroline & Jennifer. Pam & Winnie are lost in the water on the jet ski.

Mona & Beth are team number six to arrive at the Pit Stop. Idries & Jamil are at the Take A Trunk, this time they are doing much better since they can breath under water in their gear.

Max & Katie, Caroline & Jennifer arrive at the Road Block and find Pam having a hard time, which is going to give these two teams a chance to catch up.

Pam & Winnie are at the back of the pack, but they are team number nine to arrive at the Pit Stop.

Idries & Jamil have just arrive at the Road Block, they haven’t quit and want to show their kids they can do anything. The twins are the last team to arrive at the Pit stop and are eliminated from the race.