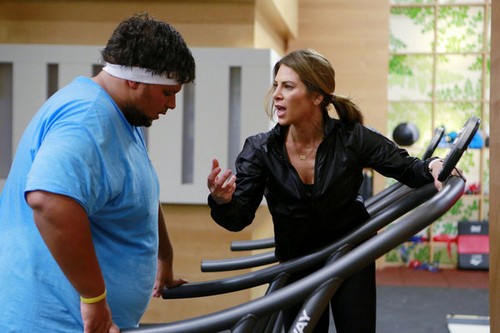 NBC THE BIGGEST LOSER returns tonight for an all new episode. On tonight’s episode entitled “Be Yourself” the players work as one team for a chance to win immunity for all. Did you watch last week’s show? We did and recapped it here for you?

Last week’s show was halfway through the competition, and the surviving eight players went to singles competition. The contestants faced their first temptation in honor of Valentine’s Day, featuring favorite Valentine’s Day treats and the promise of the winner getting a weigh-in-advantage for themselves and a friend. The trainers continued to motivate the child participants to stay active and work toward their goals at home. Jillian Michaels arranged for Sunny to take a Bollywood dance class, Dolvett motivates Lindsay to attend a cheerleading practice, and Bingo anxiously waited for news from the doctor about whether he’ll be able to begin practicing for the youth baseball league tryouts that Bob set up for him.

On tonight’s show players are informed that they’ll have the chance to win immunity for all this week if they lost a collective 70 pounds. They have a chance to lose 10 pounds off their total with the help of returning kid participants Bingo, Lindsay and Sunny, whose brains and brawn are tested in a pop challenge. With emotions and tensions at an all-time peak, this week’s theme of “working together” might be a tougher challenge than losing the amount of weight that will keep them all safe for another week.

Two contestants argue, as do Jillian and one of the players whom she feels is not performing at the level she should be. But all the contestants will have to work together in an exhaustive sand-digging challenge that could give them another weigh-in advantage. And the trainers and players participate together in a very intense team-building challenge, forcing them all to rely on and trust one another. Also this week, Subway’s Jared stops by for lunch and a pep talk, and Jillian and the kids sign Seventeen’s “Body Peace Treaty,” encouraging self-esteem and acceptance of one’s body. Finally a tension-filled weigh-in finale reveals whether or not they’ll all be safe – or will have to send another player home!

Jackson is sure since Michael has been sent home the house is going to get tense.  Jeff says he kept Francelina around because he really connected with her.  Francelina thank all the contestants for keeping her another week.

The remaining contestants do not see how they can do it.  Alison tells them there is going to be a red line this week and if they do not make the 70 lbs the person under the red line will go home.

However, there is a pop challenge where they may be able to get that 70 lbs reduced.  Bingo, Sunny and Lindsey, the Kid Ambassadors are there and Alison welcomes them back.

The contestants are now headed to the gym to work out and the trainers think that 61 lbs is going to be a big feat to accomplish.  Everyone is super stressed because they know they have to do it.   Gina is feeling frustrated because they were singles and now they are back in a group working together.

Dolvett thinks that week 8 is dangerous week because there is generally a lot of emotions going on.  Gina got pissed off and she stormed out of the gym, Dolvett followed.  Gina thinks Joe insulted her dignity and she does not want to work out with him.  Dolvett tells her to get back to the gym.  Gina will only go back if Dolvett puts her away from Joe.  She does not want  to be next to him.  Dolvett thinks that Gina is just making Joe an excuse to give up.  Dolvett tells her she is a strong lady.

Joe is annoyed that Gina has a personal trainer.  He thinks they are suppose to work together.

Jillian is not convinced that Alex is working hard enough.  She wants Alex to run 5 minutes on the treadmill.  Alex claims she cannot.  Jillian brings Gina over and tells Gina to do the 5 minutes she wants to show Alex it can be done.  Gina gets on the treadmill and she cannot do it.

Jillian melts down and calls all the trainers and wants to know why after eight weeks the contestants cannot do 5 minutes on the treadmill.  Gina meltdown and tells Jillian off, she is not happy Jillian tried to make an example on her.  Gina tells her to leave her alone.  Jillian tells her to get out of the gym.

The trainers start to bicker with each other.  Jillian keep going on and on at the trainers.  She tells them it is unacceptable that the remaining contestants are not fighting for themselves.  She requires that everyone meet her 1/2 way or it is pointless.  Jillian tells Bob and Dolvett she has to leave to cool down.

Not one to leave it alone Jillian heads to the house to speak to Alex again.  She wants Alex to acknowledge she is selling herself short.  Jillian is finally happy when she got Alex to break down and cry.  Alex is frustrated because what she does is never good enough.

Challenge – For today’s challenge they are on Long Beach.  This week it is one for all and all for one.  Currently they have 61 lbs to lose together.  This week’s challenge will allow them to drop that totally by 10lbs, but they will have to dig deep.  They have 30 minutes to find 5 green arrows and bring it to the finish line and raise a flag.  It is going to be a challenge, but worth it.  The arrows are buried in sand dunes, they have to dig to uncover the green X.

While everyone else works, Gina stands to the side and watches.  10 minutes in they find the first arrow. 16 minutes in they have 3 arrows and are 1/2 way there.  They finally get to the last set of sand dunes and they have minutes left.

Jarad from Subway shows up to see the remaining contestants and brings them lunch.  This is Jared’s 15th year anniversary of losing the weight.  He tells the contestants that Subway saved his life.

Subway has thrown in a cool prize – the winner of the Biggest Loser will be appearing in a Subway commercial with Jared.

The excessive was great and the whole house feels more comfortable with each other. 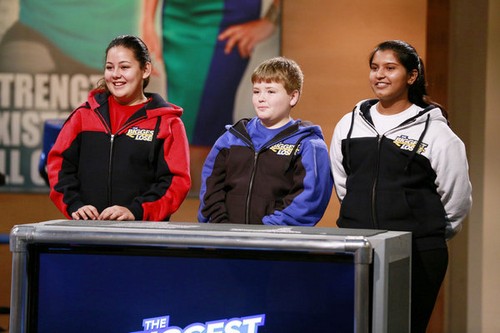