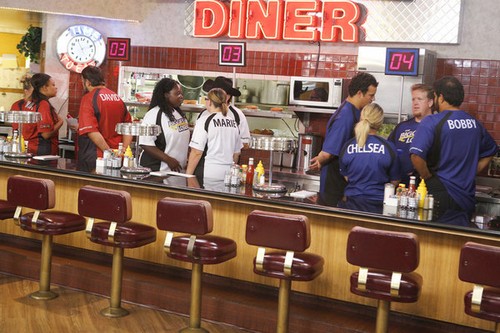 THE BIGGEST LOSER returns to NBC tonight with a new episode.  On tonight’s show one team goes back to work in a diner.  Did you watch last week’s episode?  We did and we have a full and detailed recap, right here for you.

On last week’s show host Alison Sweeney kicked off last week’s episode with a shocker – one of the contestants was going home and taking their trainer with them, and their weight would be the only weight that counts for their team when they returned in time for the weigh-in. A simple spin of the wheel determined who would be chosen among the players, who would love to reunite with loved ones but are understandably anxious about the intense pressure they’ll face trying to lose enough weight to keep their whole team safe another week. Meanwhile, one trainer brought their contestant back to a sport they once loved, and two players celebrate milestones at the weigh-in before another contestant was sent home.

On tonight’s show, the contestants take a pop quiz about obesity in the workplace after meeting host Alison Sweeney in a diner. The location proves significant since that’s where the losing team will be working all week while still trying to eat healthy and exercise with much busier schedules. While the losing team stays busy waitressing, cleaning up, doing dishes and squeezing in workouts, they still find time to bring “treats” from their day job back to the ranch to tempt other players. Meanwhile, one trainer works closely with his contestant to determine what has been holding him back from bigger weight loss numbers, and another tries to help one player’s family member get started on the path to a healthier lifestyle. Then it’s time for another contestant to head home after a weigh-in that yields surprising results.

The Biggest Loser season 15 episode 9 airs at 8PM on NBC and we will be live blogging it with all the up-to-the-minute details. So make sure to come back to this spot and spend the evening with us!  Make sure to refresh often to get the most current details and updates!

The three teams walk into a diner; they’re a little confused about what’s going on. Now they’re going to compete in a pop quiz, the losing team will need to work in the diner all week. Tanya looks like she’s feeling tempted by all of the bad foods in front of her, she wants to stay in the gym and not work in the diner. The team with the fewest points will have to work in the diner, Marie doesn’t want to lose this challenge at all she’s very nervous about it. So far the red and blue team get the first answer right getting a point each, the white team have none.

Everyone got the second question right, blue and Red are still tied for the lead. Blue and White gets the third question right, the red team did not. The Red team and blue team got the right answer, the white team sadly will have to work in the diner, Marie doesn’t look that happy about losing at all.

Ruben is now 350 pounds after leaving the Biggest Loser ranch, he’s been working on his album and now he’s getting happy about it releasing. Ruben says that he’s realized that he needs to find time for himself and workout, Ruben tries to find more opportunities to eat with his mom. Ruben says that the biggest opportunity the Biggest Loser gave him was his life back. Ruben can’t wait to show the new and improved Ruben and he plans to be in the 200’s when he makes it to the finale.

The blue and red team walk in to tell the trainers that the white team have to work at the diner for losing the challenge this week, Jillian looks pretty pissed. Jillian feels like she’s completely cursed, she doesn’t know what she’s going to do now and is annoyed. The White team are working at the diner; Marie is feeling nervous about the temptation. Jay says he’s frustrated that his hours are now all messed up; Tumi doesn’t know how she’s going to work out with Jillian after the diner. Jay says that the reality of this is that he might have to go home; the white team think that they should bring back some food from the diner to the blue and red team.

Dolvette is making the red team work hard, he wants them to win. Rachel is afraid of how her life is going to be like after the Biggest Loser, Dolvette wants her to use her fear as fuel. Dolvette says a demon will never leave you, but depending on how you use it could help you. Tanya thanks Dolvette for the wisdom and not sugar coating everything, after the white team lost the challenge it made her think of the real world.

The red team talk about how they’re thankful for having Dolvette to train them and how he’s changed their lives, he even cried from what they said. Dolvette wants to fight for these individuals and feels very flattered by what they said.

The blue team are working out, Bob is going crazy because Hap keeps on getting low numbers and it’s all not adding up. Bob talks to Hap about his low numbers; Bob wants Hap to start listing all the food he eats this week to make sure, he wants him to stop eating complex carbs. Hap believes that maybe in the past week he hasn’t been eating the right foods, he wants to do everything Bob wants him to do. Bobby is feeling tired now, everyone is rolling on the mat and Bobby isn’t confident in it. Bobby looks more scared to do a forward roll; he can’t do one at all. Bob is surprised how Bobby can’t do a forward roll. Bob talks to Bobby, being thankful he’s been making success on the scale with big numbers; he wants Bobby to now become more confident.

Jillian sees the white team and they look very tired and she understands why they are, the entire White team looks frustrated about this. Jillian wants them to crank up the intensity in order for them to compete on the scale properly, Jay is nervous because their team’s routine has been snapped. Tumi can feel the pressure now, she likes having control because it makes her safer. The blue team arrive into the kitchen and they see the white team has put food from the diner on the table; Hap looks like he wants to have a cookie.

The white team look like they’re really struggling with the diner and working out. The blue team are working had along with the red team also. Bob says that he expects greatness out of his entire team and he wants them to expect the same with themselves. Jay says that I there’s any chance that they can win this it’ll prove that people do have time to be healthy. The white team finish their last day working at the diner, now all the teams are getting ready to weigh in.