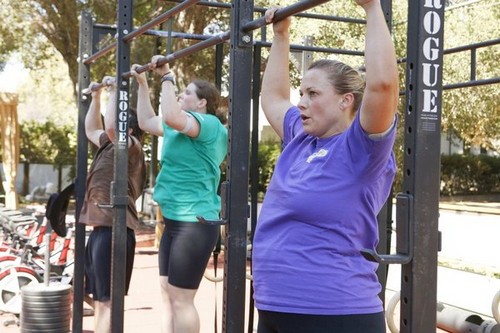 THE BIGGEST LOSER returns to NBC tonight with a new episode.  On tonight’s show the competition goes from teams to singles.  Did you watch last week’s episode?  We did and we have a full and detailed recap, right here for you.

On last week’s show the contestants took a pop quiz about obesity in the workplace after meeting host Alison Sweeney in a diner. The location proved significant since that’s where the losing team would be working all week while still trying to eat healthy and exercise with much busier schedules. While the losing team stayed busy waitressing, cleaning up, doing dishes and squeezing in workouts, they still find time to bring “treats” from their day job back to the ranch to tempt other players. Meanwhile, one trainer worked closely with his contestant to determine what has been holding him back from bigger weight loss numbers, and another tried to help one player’s family member get started on the path to a healthier lifestyle. Then it’s time for another contestant to head home after a weigh-in that yields surprising results.

On tonight’s show the 10 remaining contestants reach a milestone this week, as the competition goes from teams to singles. Wearing their new individual color shirts, the players meet host Alison Sweeney for a night-time “ring of fire” endurance challenge that involves holding a percentage of their individual weights. Alison also shares exciting news about an upcoming event that will be a “Biggest Loser” first for contestants, and sobering news that this week’s weigh-in will end with a double elimination. Now that the teams have been disbanded, trainers Bob, Jillian and Dolvett are eager to switch it up and work out with new contestants this week. One player struggles with self-sabotaging negative thoughts, and two contestants make it to the coveted “One-derland” at weigh-in and say goodbye to weighing over 200 pounds. Then it’s time for the dreaded red line, which will determine which two players will be going home.

The Biggest Loser season 15 episode 10 airs at 8PM on NBC and we will be live blogging it with all the up-to-the-minute details. So make sure to come back to this spot and spend the evening with us!  Make sure to refresh often to get the most current details and updates!

RECAP: Bobby has lost over 90 pounds, the Biggest Loser is one of the greatest experiences in his life; Bobby actually went and told his dad that he’s gay, his father accepts him for who is and supports him. Bobby misses the ranch, he knows that it’s different working out on his own. The Biggest Loser has helped become more confident in who he is. The white, red and blue team walk into their challenge for the day, there’s a table with a black sheet on a table that has them curious. It turns out that they’re now going into singles. Now they’re going to have to compete against each other and train with other trainers. Who ever stays this week will be able to compete in the first ever Biggest Loser Triathalon, who ever wins the Triathalon will be given a spot in the final three. Their challenge is called the ring of fire, they need to hold the metal rod through the ring and can’t let it drop. Who ever wins the challenge will be given a one pound advantage. Tanya is the first eliminated from the challenge, Tumi is the second to be eliminated. twenty minutes go by and Jen is then the third eliminated from the challenge. Hap is the fourth eliminated, then Marie is fifth and Chelsea is sixth; then Matt is out. Now it’s Rachel, Jay and David who are left remaining. none of them want to give up, they want to win the one pound advantage. David is the seventh out, now it’s between Rachel and Jay.

Jay ends up being the last eliminated, Rachel won the first individual challenge. She has won the one pound advantage, because at this weeks weigh in two people will be eliminated. Dolvette mentions how he’s been dying to train some of these people, now the trainers get to train with people they’ve never trained before. Hap knows that he needs to work his ass off in order to win. Matt is trying to show Dolvette how much he’s changed throughout the competition. Matt is now a new man, he mentions how he made the right decision to come to the Biggest Loser ranch. Jay is pushing himself hard, Rachel is also pushing her self hard. Jen keeps freezing at the jumping box, she hates the feeling of being shakened. Jen always expected herself to finish her workouts, with her not being able to do the box jump she’s getting upset. David is working his ass off with Jillian, she’s being extremely tough on him. David wasn’t able to finish her first workout on the first day, now he’s keeping up and is kicking ass. Jillian takes David outside to talk to him, David talks about his promise to his now passed away wife.

Jen went to the sport med center to recover, Bob finds her crying while lying down there. Jen is completely upset because she couldn’t do the box jumps, Bob is surprised by this; he says that there’s got to be more behind it. Jen mentions that she had negative thoughts and that’s what has made her sad; she wants to keep this new life and not revert to her old self. Bob comforts her and makes her feel better after their talk. Jay and David talk about how they want revenge after Rachel’s win at the challenge, David and Jay end up winning due to them giving themselves a head start. Rachel lost and had to give them both breakfast in bed, it cuts to the Biggest Loser contestants working hard; none of them look like they want to go home, they’re trying their hardest.

Hap is up next he’s nervous because of his past low number, from 321 he is now at 316 pounds. Jen is up on the scale, from 200 pounds she is now currently at 195 pounds. Matt is up on the scale as the last contestant to be weighed, from 268 pounds he is now currently at 263 pounds. I turns out that Hap and Matt will be going home this time. Both Hap and Matt are happy with their progress in the house and are thankful for all the Biggest Loser has done for them.