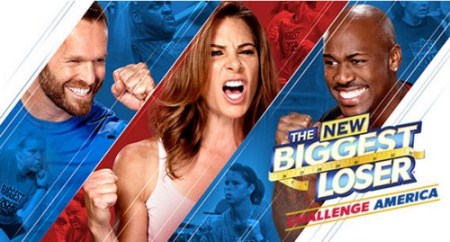 THE BIGGEST LOSER live recap on Celeb Dirty Laundry returns tonight to cover an the final episode of the season. Tonight’s episode entitled “Live Finale the Biggest Loser is revealed in the 14th Season finale.  Did you watch last week’s show? We did and recapped it here for you?

On last week’s show it was down to the final five and the stakes were never higher. Last week, a red line determined which contestant was going home, and a yellow line determined which two players America voted for to determine who the third finalist will be for season 14. But first, the contestants had to compete for a weigh-in advantage during a “put their weight back on” challenge, pulling all the weight they have lost up a mountain by sled, and then dropping weights incrementally representing how many pounds they lost each week.

On tonight’s show in this must-see, exciting live finale, the contestants from this season return for a special reunion and a chance to weigh in one last time – and show America how much weight they’ve all lost since beginning their weight-loss journeys. Kid participants Biingo, Lindsay and Sunny will also return to show off their inspiring transformations. America’s vote will be revealed for who will be the third finalist, eligible for the grand prize, and all the players who have been eliminated will compete for the $100,000 “at home” prize. Then it’s the moment viewers have been waiting for, when one of the three finalists will be named this season’s “Biggest Loser” and win the coveted grand prize of $250,000! Alison Sweeney hosts the series, and trainers Bob Harper, Jillian Michaels and Dolvett Quince also star.

The Biggest Loser season 14 season finale airs at 8PM on NBC and we will be live blogging it with all the up-to-the-minute details. So make sure to come back to this spot and spend the evening with us!  Make sure to refresh often to get the most current details and updates!

6 months ago 15 people set out on a weight loss mission that comes full circle tonight.  Unfortunately, we need to suffer through irritating Alison Sweeney to get to find out who America voted into the top three. Jackson is the first openly gay player on this show and he is a camp counselor looking to set a good example. He is so ridiculously happy and does look amazing.. He is thrilled to be able to practice what he preaches as far as the kids go.

Joe lost 100 pounds super fast and he has returned to his former athlete status. Of course he looks fabulous and is beaming from ear to ear.

A gold envelope appears and Jackson is chosen to be in the final round competing for a quarter of a million bucks.  This season introduced the audience to three young kids. The first was Lindsay who wanted to try out for gymnastics and cheerleading. She takes the stage with her cheerleading squad and now she is totally fit and 47 pounds lighter.

Pam, Nate and Alex take the stage next. Pam was known for her dancing and she says that fans of the show dance up to her. Nate went home early and he inspired his whole family to get healthy. Alex says she found the confidence to lose the weight and that was the important thing for her.

The players eliminated during the season get on the scale and the one who lost the most weight will win 100,000 grand.

Pam steps on the scale first and she lost 71 pounds. Nate is up next with a 99 pound weight loss. Alex was a slow starter but in the end she has lost 84 pounds.

Taking the stage to show off next are Francelina, TC, new dad Michael and Cate.  Francie is first on the scale and she has lost 95 pounds. TC was in a car accident with his son a few years ago and he promised he would lose weight. He has lost 110 pounds while in this competition. Michael’s biggest fear is not be around to raise his son and that prompted him to lose weight, 136 pounds to be exact.  Cate admits to having a food addiction and has lost 64 pounds.

Lisa is a mom of four, David is a cop, Gina’s an attorney and Joe from earlier in the show all hit the scale next.

Lisa has lost 108 pounds and looks amazing.  David put aside taking care of everyone else in order to whip himself into shape. He is 102 pounds lighter. Gina is actually leading with a 113 pound weight loss. Joe is the last one in the running to take home $100 grand. Joe los 147 pounds but Gina takes homes the cash.

Bingo was one of the kids that came to the show looking to lose weight. He just wanted to be a normal kid, at a normal weight and able to play baseball. Bingo has lost 43 pounds and his family has also gotten healthier. He tried out for a state baseball team and actually made it.

Now we’re down to the final three- Jackson is obviously really loved by everyone. He may have been made fun of as a kid but those days are clearly over. Jeff felt like he needed to lose the weight to make his father proud. Dani has busted it all season and sure looks like the winner. She feels like her dreams are possible now that she basically lost a whole person.

Sonny lost 51 pounds and has met her goal of fitting into her prom dress.  She’s an example for kids who need to get healthier.

It’s finally time to name a winner and Jackson takes to the scale first. He has 138 pounds. Jeff beats him and loses 181 pounds and last but not least is Dani. She lost 121 pounds and is named this season’s Biggest Loser!