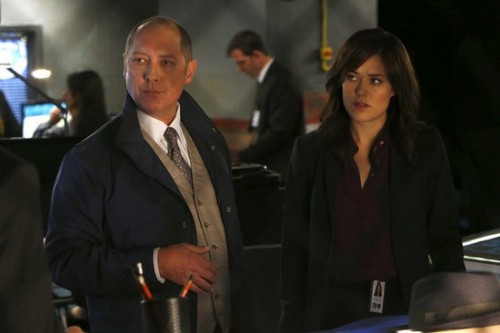 Tonight on NBC their new criminal drama, THE BLACKLIST starring James Spader continues with a new episode called, “Wujng.”  On tonight’s show Red and Liz go under cover to spy on a notorious spy assassin – Chin Han guest stars.  Did you watch last week’s premiere episode?  We did and we recapped it right here for you!

On last week’s Red predicted an impending catastrophe, rooted by the work of an assassin, called “The Freelancer.” Together, Liz and Red went undercover to prevent from having his next target, Floriana Campo from being killed. Elsewhere, Ressler and newly re-hired CIA agent, Meera Malik, who’s been added to Red’s private security detail, keep an eye on them from a distance. Meanwhile, Liz considered what she should do next concerning Tom and the mysterious box she found hidden under the floorboards.

Tonight’s episode 2 of The Blacklist is going to be great and you won’t want to miss it.  So pop some popcorn, grab a snuggle buddy, and definitely tune into this hot new series! While you wait for our recap, hit the comments and let us know if you are excited about this new series.

RECAP: Two motorcycles drive up to a car and shoot this guy inside, they steal his briefcase and sever his hand. Liz is looking in the box again, she takes out a gun and loads it, then she goes around the house and puts some books in a bucket and heads outside with it. She puts water in the bucket and shoots in the books when she hears a garbage truck go by so she can get a sample of the fired bullet.

Red is outside playing chess when some guy walks up to him, he wants to give him a job and wants it done fast.

Tom and Liz are discussing the man that came into their home, she tells him that the man is dead. Ally arrives at the door and she is making breakfast, Liz leaves for the day and heads to the bureau.

Elizabeth first goes to get the bullet checked out to see if matches any crime scene.

Red tells Liz that Wujing has hired him to decode CIA messages on behalf of the Chinese and she has told him that Liz is his new Encription Specialist.

Tom goes out for some fresh air and a bunch of guys go into the house to add spy surveillance equipment.

Liz doesn’t want to do this so she tells Red she wants something in return, she wants to know why he picked her.

Red meets with the FBI and tells them where the spy Wujing is and comes up with a plan. Liz is equipment with a bug to follow her as she heads out on the case with Red. When they arrive at their destination the guy wants to check out Liz’s prints to see who she is and the FBI intercepts the information so he sees nothing. Next, the two are escorted into an elevator that goes really deep underground, so far that the bug no longer works.

Once the elevator reaches the bottom, Liz and Red meet up with Wujing. Meanwhile, the FBI is going nuts because they can no longer track the two. Red makes small talk with Wujing while Liz tries to decode the message.

Red sees a video of a white van and freaks out, he says it is the FBI and he is furious that the street wasn’t sweeped before he got there. Wujing says that if the FBI is there, it is his fault. Red is furious and calls Wujing a two bit spy who is risking everything.

Red tells Wujing that he is ashamed of him, he can’t believe that he would put them under jeopardy. Liz is using the remote mirroring program, the FBI is getting the data; they know the two are still ok. Liz found the next target, Henry Cho. Both the FBI and Wujing are looking into finding out who Henry Cho is and it turns out that he left China three days ago and landed at a Dallas airport. Wujing is the first to find him and sends his team out to get him, while the FBI is only a few steps behind him.

Wujing pays Red just when alarms start to go off and Wujing tells them to stop. Wujing accuses one of his people with working with the FBI. All of a sudden Wujing beats the crap out of him in front of Red and Liz who are clearly upset that he is being blamed. The guy who is beaten notices the memory stick in the computer that Liz puts there and when he is just about to say something, Red shoots him. Wujing is upset that Red killed him and says he is now going to kill Liz. Red tells Wujing if he kills Liz, then he will kill him. Wujing changes his mind and leads the two of them out through a different exit.

Ressler is on the scene and working hard to knock the bad guys out with some awesome karate kicks. One of the bad guys finds the boy, Henry Cho is there, he begs the guy to let him son go and tells him that he will do anything. Just as the guy goes to shoot Cho, he is shot dead.

Red and Liz are in a car with Wujing and are let off on a street; not far from them, Wujing and his guys are apprehended.

In the car, Liz tells Red he has nothing, she has a life, then he tells her that he has her.

Liz is alone, she takes her wedding rings out of a drawer and puts them back on.  It turns out that the FBI knows that Liz is investigating Tom.

Red is in his apartment enjoying dinner and drinking wine. Red opens up the envelope that Wujing gave him and it has a number on it.

Liz arrives home and Tom apologizes, he tells her that he realizes that she has to keep secrets for her job.

We see the same guy watching Liz and he takes a big bite of an apple and the show ends there.